HARRY gave the Palace a right royal bashing last night – with a helping hand from the Prince of Wales.

Harry Kane is unlikely to ever reveal all to an American chat show queen. 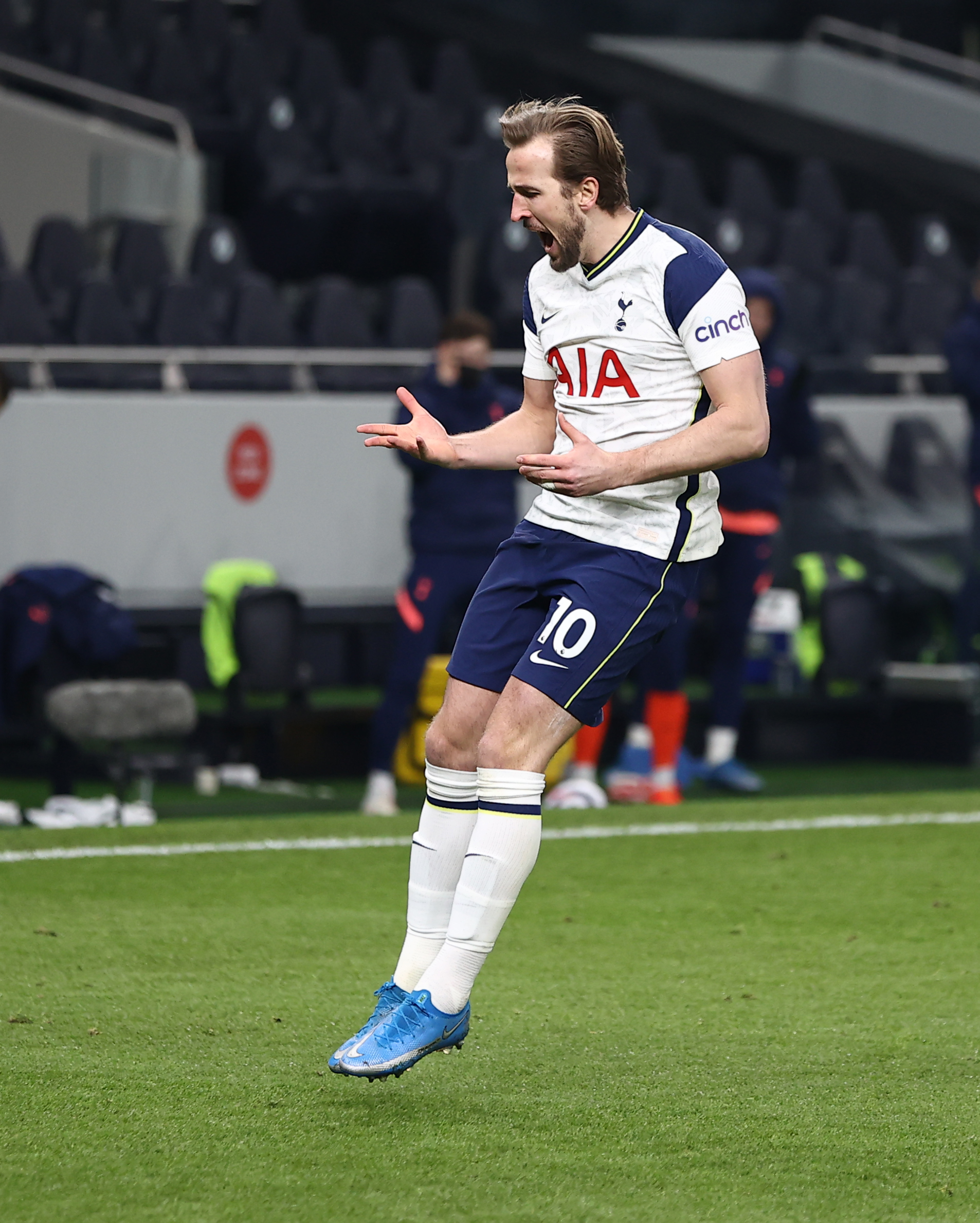 Harry Kane refused to be overshadowed by frontpartner as he hails his doubleCredit: News Group Newspapers Ltd 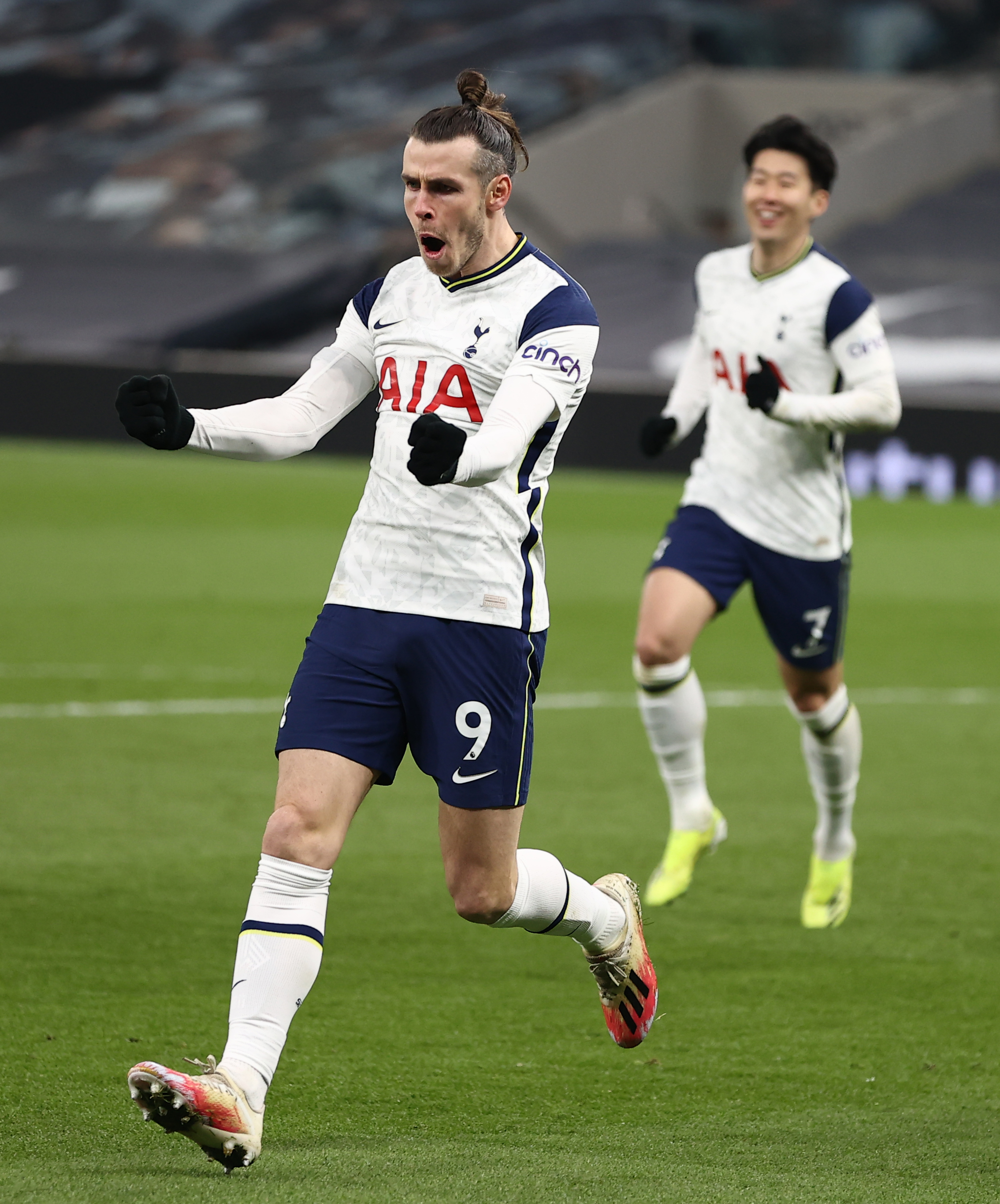 100 – Harry Kane’s second goal of the evening was Tottenham’s 100th goal in all competitions this season, becoming the second club in Europe’s big-five leagues to reach that tally in 2020-21, after Bayern Munich (106). Century. pic.twitter.com/zY0CjEmuow

And the only open top bus ride the Tottenham striker dreams of going on is one with his team-mates and a trophy, not James Corden.

The England captain always prefers to let his football do the talking – which he did so again here as he put the Eagles to the sword.

He set up two goals for his Welsh pal Gareth Bale then bagged a couple himself, with his first a majestic curling shot from the corner of the box.

Kane then completed the rout with an easy finish for his 24th goal of the season in all competitions.

But he is not only goalscoring royalty, he is also king of the assists, having clocked up 16 of those this term.

The Chingford hero has now been directly involved in 40 goals in 36 games for Spurs this season – the most of any player for a Prem club.

The vastly-improved Bale might have four Champions League winners’ medals, but the only real superstar at Tottenham now is Kane.

Few who are as deadly as he is in front of goal are so unselfish.

But Kane, despite taking all the plaudits, showed yet again he is the ultimate team player as helped fire his club back into serious contention for a top-four finish. 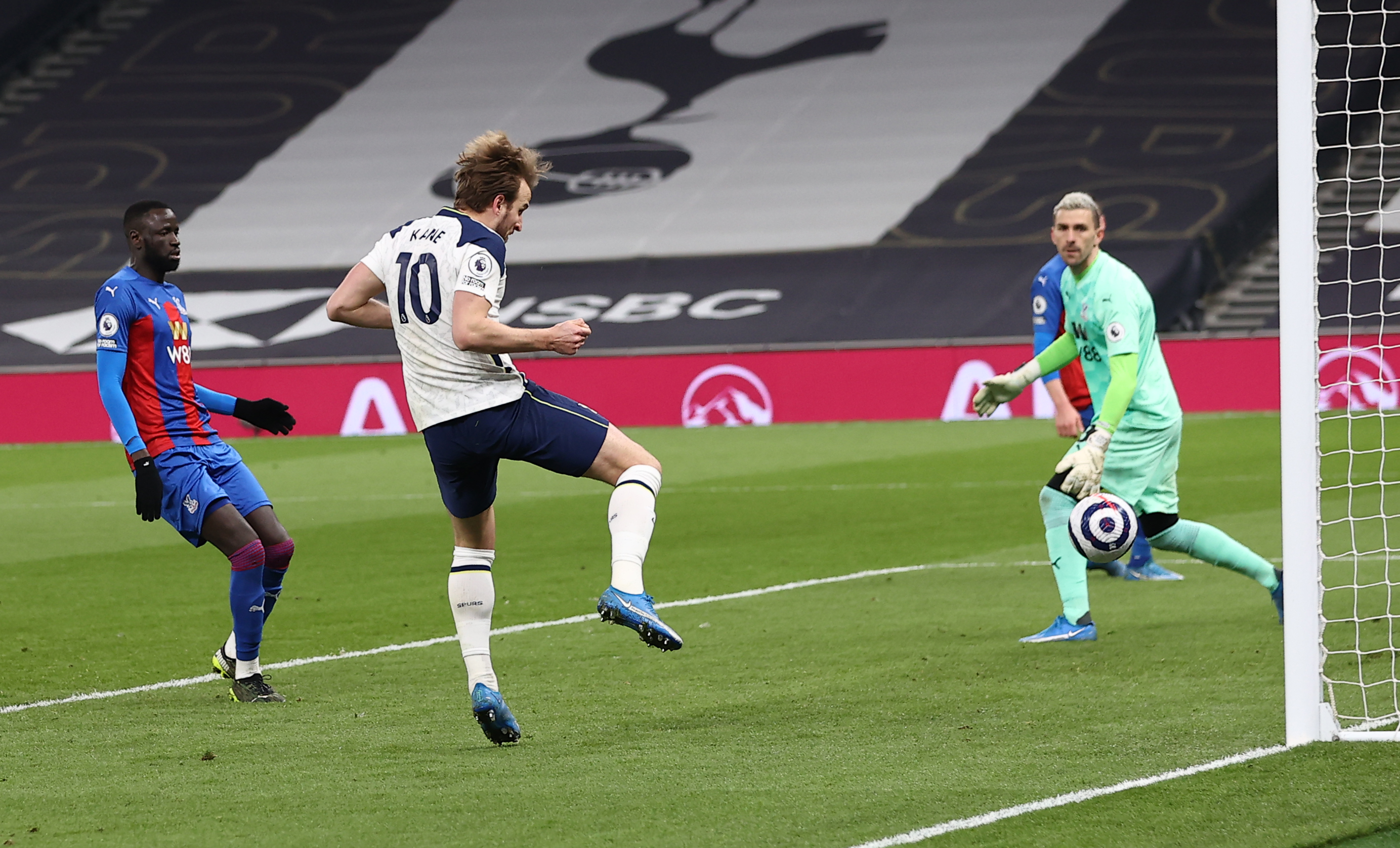 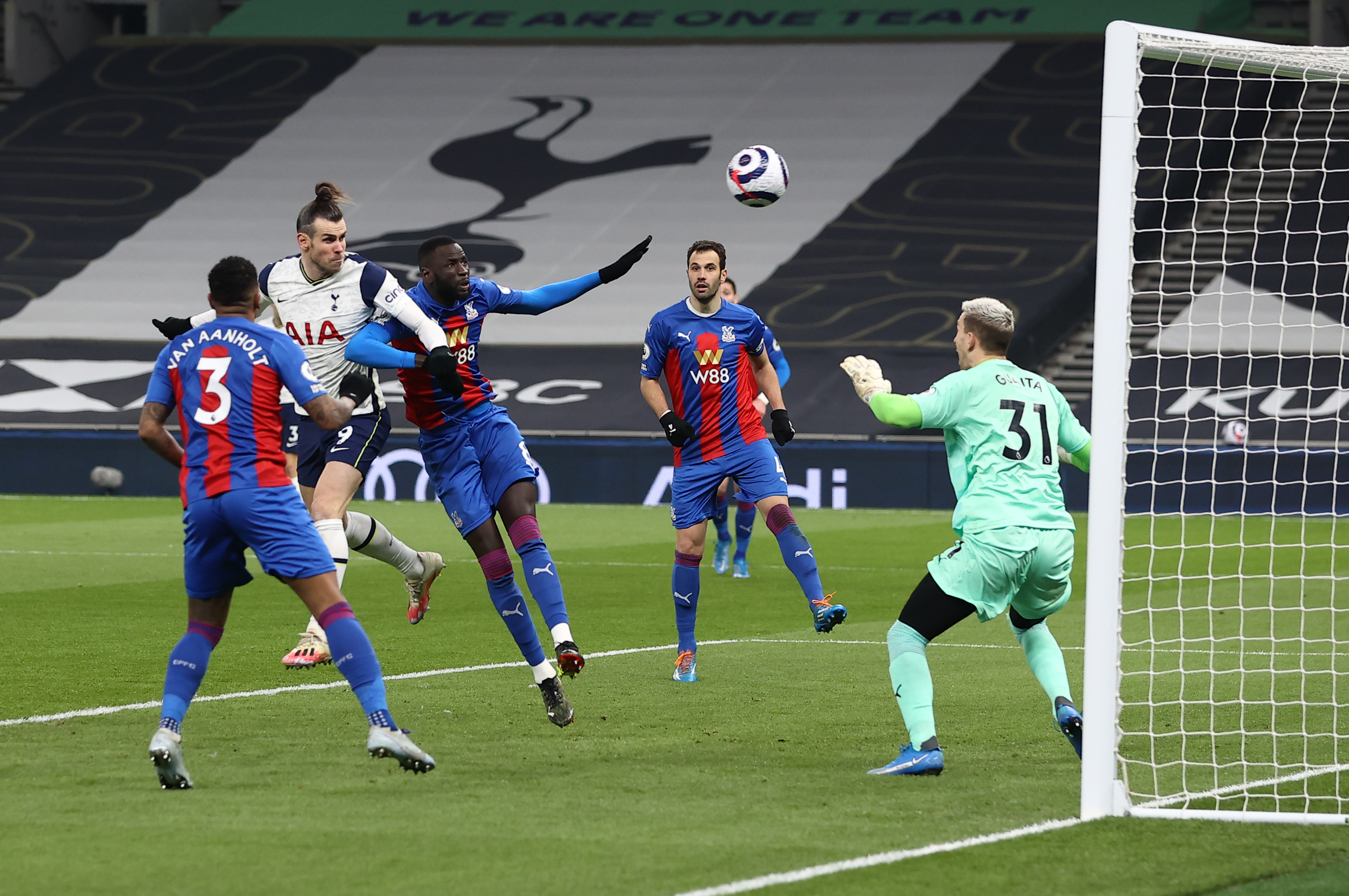 As for Palace, defeat ended their three-match unbeaten run, but their haul of 34 points after 28 games is still one of their best top-flight hauls.

The Eagles have not won a League match at Tottenham since November 24, 1997 when Neil Shipperley scored the only goal of the game.

Bosses Jose Mourinnho, 58, and Roy Hodgson, 73, hugged each other on the touchline before kick off like two long-lost brothers.

TV viewers turning on at that precise moment might have believed they were watching the Antiques Roadshow by mistake.

Especially if they watched the next 20 minutes – which was about as thrilling a knackered old bookcase.

Tottenham had the first chance when Gareth Bale crossed for Son Heung-min, who planted a header from six yards straight into the arms of Palace keeper Vicente Guaita in the sixth minute.

But the game struggled to get going as Mourinho’s men, without Tanguy Ndombele – who was dropped to the bench – looked even more laboured than usual.

It took Kane to break the monotony and briefly spark this game into life as he stopped backing into defenders long enough to collect Lucas Moura’s ball down the left, beat his man and cross for Bale to tap the hosts 1-0 up in the 25th minute.

Suddenly the Wales skipper is not looking so bad now – although you could say the same for Spurs in the first half as they failed to make their advantage count.

Kane wastefully fired a free kick against the wall after Gary Cahill had been booked – incorrectly it appeared – for bringing down Moura in full flight.

While Sergio Reguilon volleyed a Bale cross wide in what would have been a spectacular goal had it gone in, Luka Milivojevic – whose cheap surrender of possession – led to Tottenham’s opener redeemed himself by setting up Christian Benteke’s equaliser on the stroke of half time. 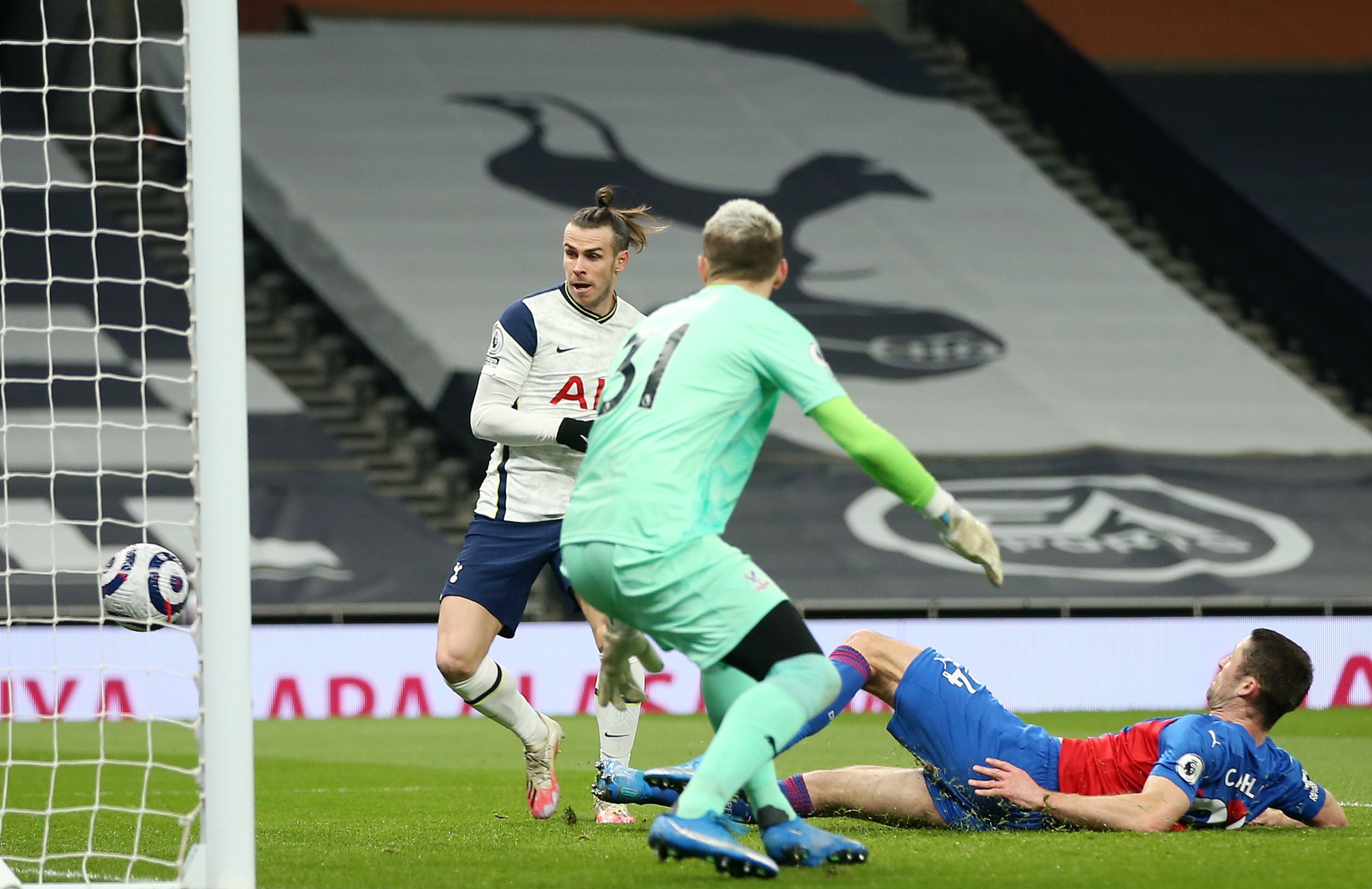 The Serbian midfielder delivered a peach of a cross from the left and the Belgian striker managed to get in front and above his international team-mate Toby Aldwerweireld to powerfully head home.

Hodgson sent on Wilfried Zaha for Eberechi Eze during the interval, but it was Kane who made the impact as within five minutes he had headed Reguilon’s cross back for Bale to nod in for 2-1.

It was the on-loan Real Madrid superstar’s fourth goal in his last three Prem matches and his 10th of the season in all competitions.

Bale has now scored in each of his last five Premier League home starts – a run going back eight years.

And having only scored four goals in his first 16 appearances this season, he has since scored six in his last six.

But he still could not steal the limelight from Kane who got the third in the 52nd minute with a glorious first-time shot from the corner of the area after being teed up by Matt Doherty.

Zaha drilled a shot against a post for Palace, but Kane was not finished yet.

The Three Lions frontman slotted into a virtually empty net after long-time partner Son – who, with Bale’s resurgence, must now feel like there are three of them in their footballing marriage – cushion volleyed Reguilon’s deep cross into his path.

And Kane crowned a scintillating attacking show on 77 minutes.

Erik Lamela lofted a cross that Son squared for Kane to slide home.

That fourth strike means Kane and Son have supplied 37 of Spurs’ 46 Prem goals this term.

Another brace at home. ✌️ pic.twitter.com/HNvY5MRy7B