PIERRE-EMERICK AUBAMEYANG saved Arsenal’s season  with a dramatic 87th winner to keep their Europa League hopes alive by the skin of their teeth.

The Gunners were staring down the barrel of a second successive away goals defeat after twice gifting a lifeline to Benfica. 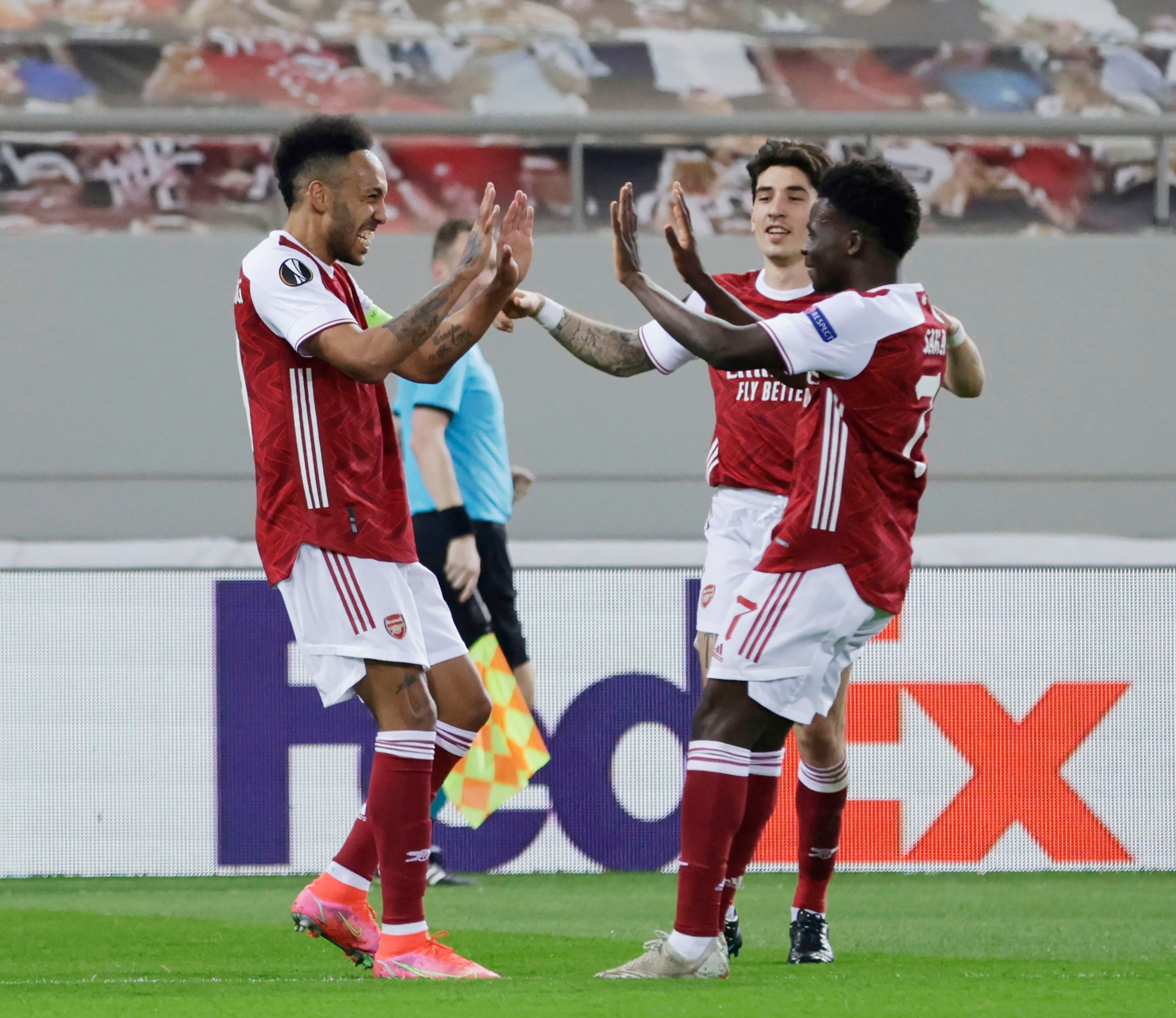 Skipper Pierre-Emerick Aubameyang is hailed for his Arsenal openerCredit: Reuters 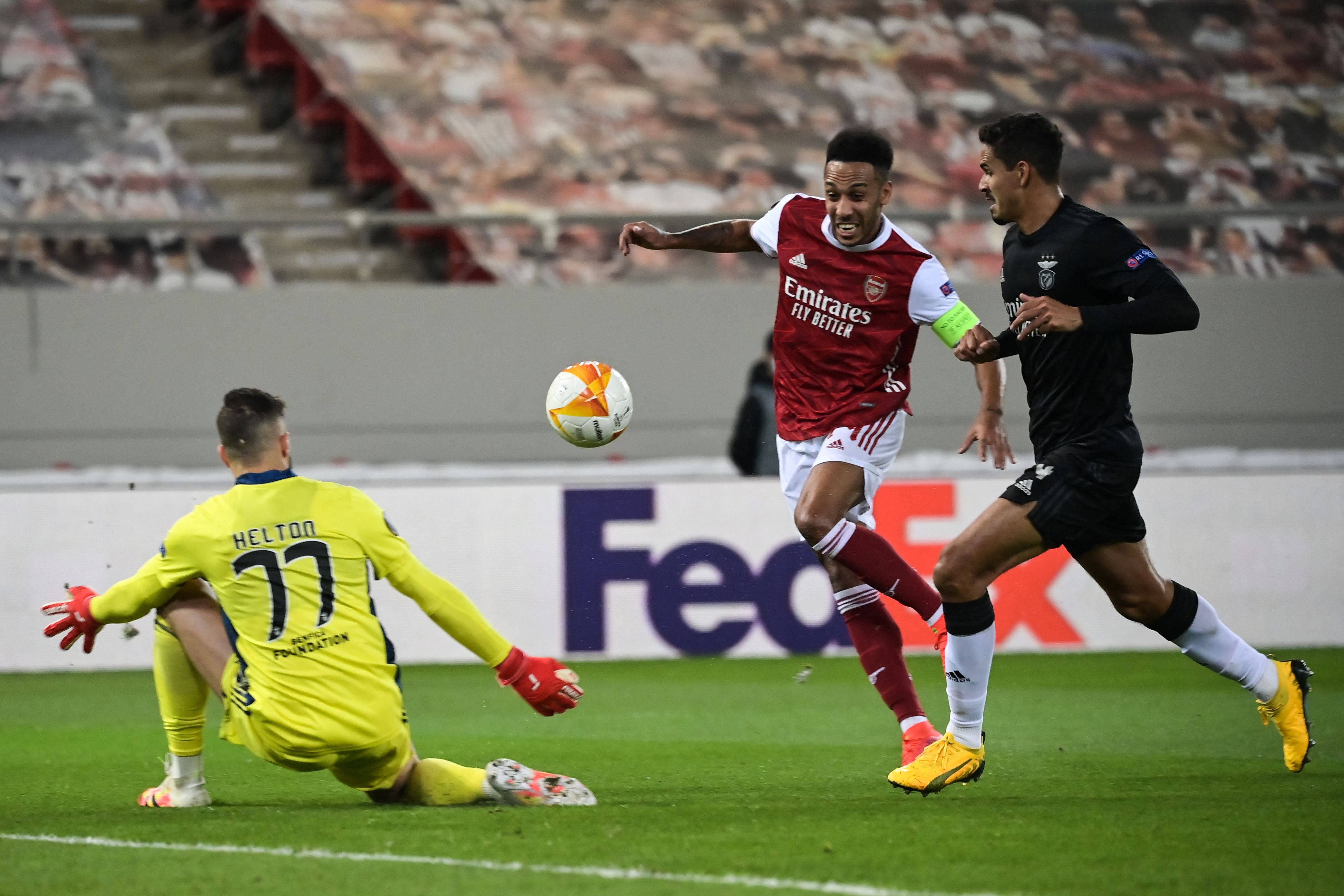 But just when it looked as if all hope had gone for Mikel Arteta’s men, captain Auba got on the end of Bukayo Saka’s cross to head in his second of the night.

And that was just about enough to secure a place in the last 16 after a night of unbearable tension for their watching fans.

They came into the game knowing that a clean sheet would be enough to take them through after securing an away goal in last week’s 1-1 draw in Rome.

But playing for a goalless draw would have been far too much of a risk for an Arsenal team who have not exactly been watertight at the back in recent weeks.

So they accepted that their best form of defence was going to be attack and were rewarded for their boldness midway through the first-half.

Bukayo Saka’s cute reverse pass opened Benfica up and Aubameyang did the rest with a cute dink over advancing keeper Helton Leite.

It was a much tougher chance than the absolute sitter which the Arsenal skipper had missed in the first leg.

But all the goal achieved was to force Benfica into committing more men forward in search of an equaliser. 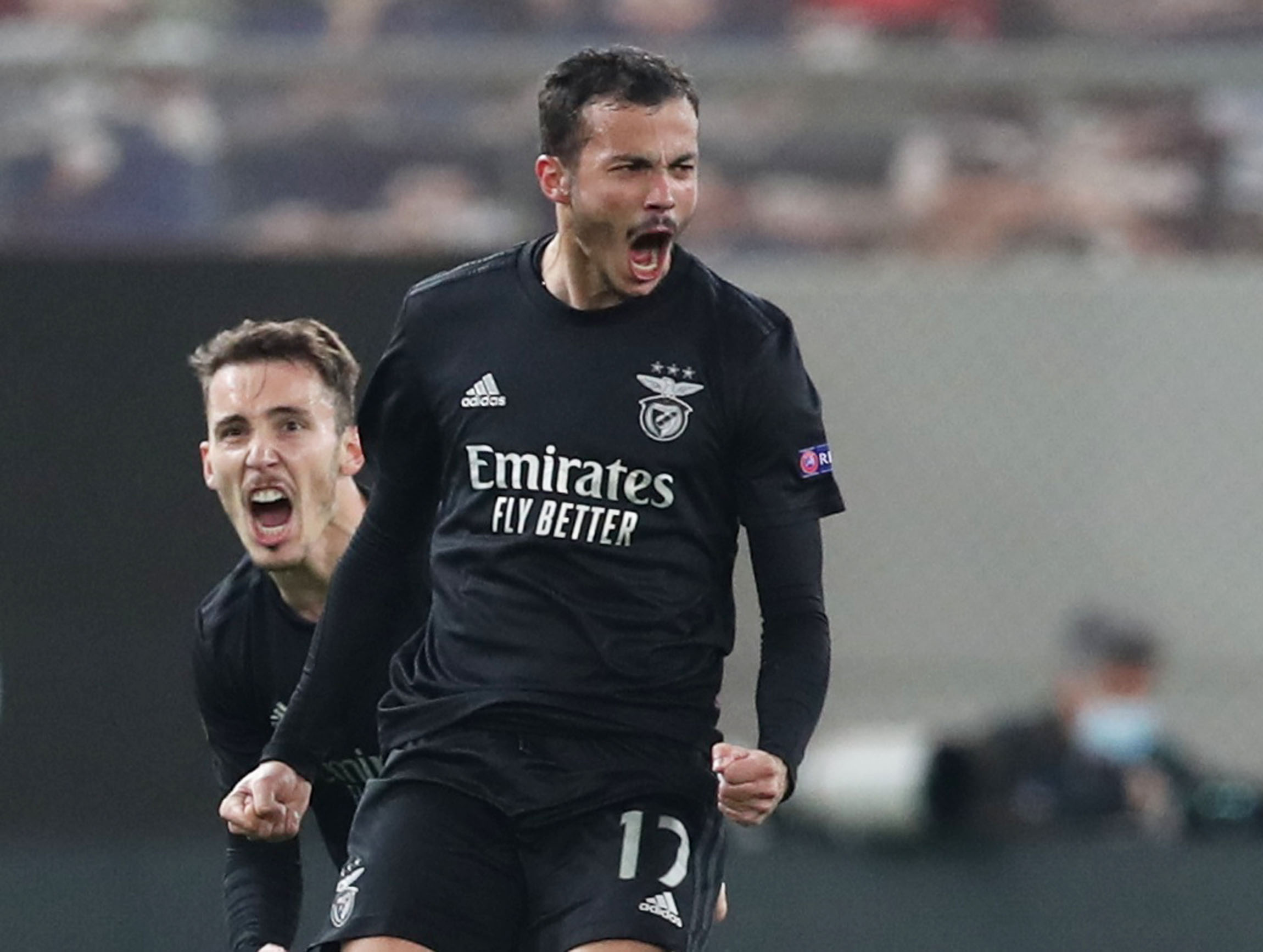 Diogo Goncalves celebrates making it 1-1 on the night, 2-2 on aggregateCredit: Reuters 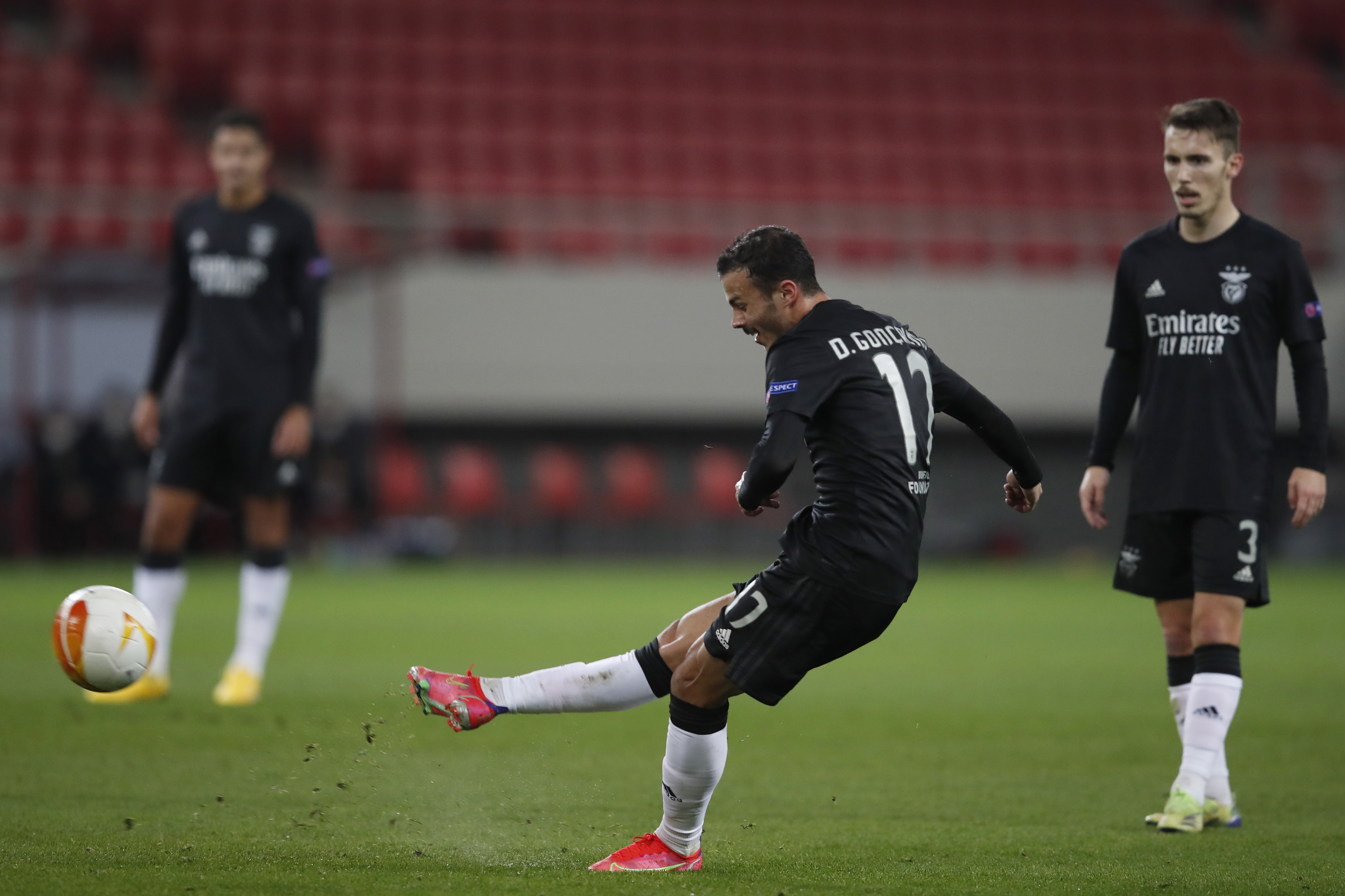 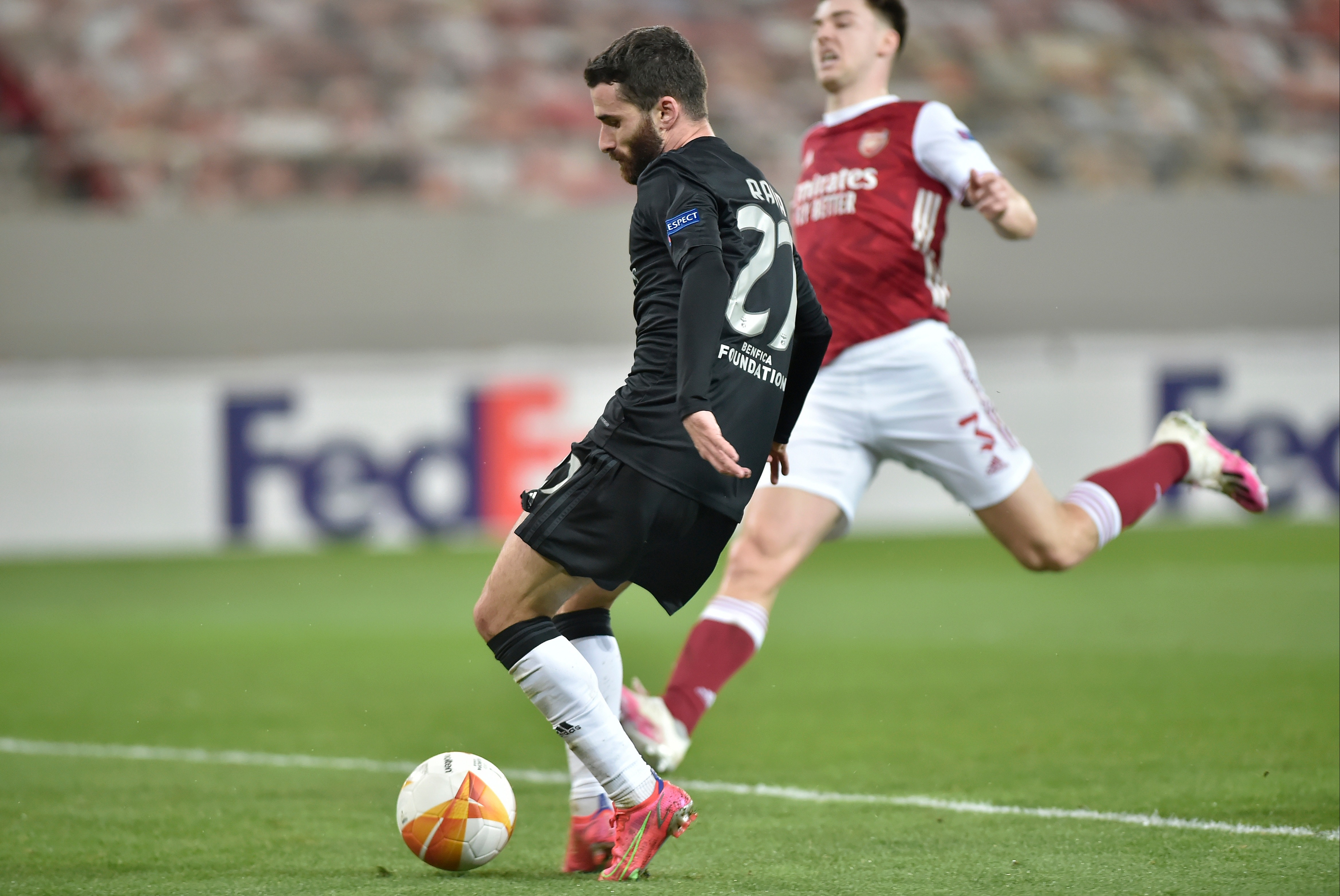 Rafa Silva put Benfica 2-1 up on the night before Arsenal hit back with two goalsCredit: Getty Images – Getty

And they were handed a 42nd minute lifeline by Dani Ceballos’ careless foul which allowed Diogo Goncalves to drill an unstoppable free-kick into the top corner of Bernd Leno’s goal.

It was virtually the first time the Arsenal keeper had to touch the ball all evening as all his team’s first-half dominance was made to count for nothing.

But they had no-one to blame but themselves for their failure to take advantage of that early lead to put the tie to bed.

They thought they had regained the advantage five minutes after the break when Aubameyang applied another one-touch finish to Martin Odegaard’s delicious through ball.

But VAR confirmed that the Arsenal skipper had strayed marginally offside and ten minutes later they were undone again by another Ceballos blunder.

Odegaard’s corner was plucked out of the air by Helton, who launched the ball straight down the pitch with Arsenal’s central defenders out of position.

It should have been easy meat for Ceballos to clear, but the dopy Spaniard’s careless back header left Leno stranded with no chance as the lurking Rafa Silva pounced to fire Benfica ahead.

Suddenly Arsenal needed to score twice to go through and they pulled one back within six minutes when Kieran Tierney arrowed a low shot into the far corner.

And just when it looked like they were running out of time, Auba completed the remarkable comeback right at the death. 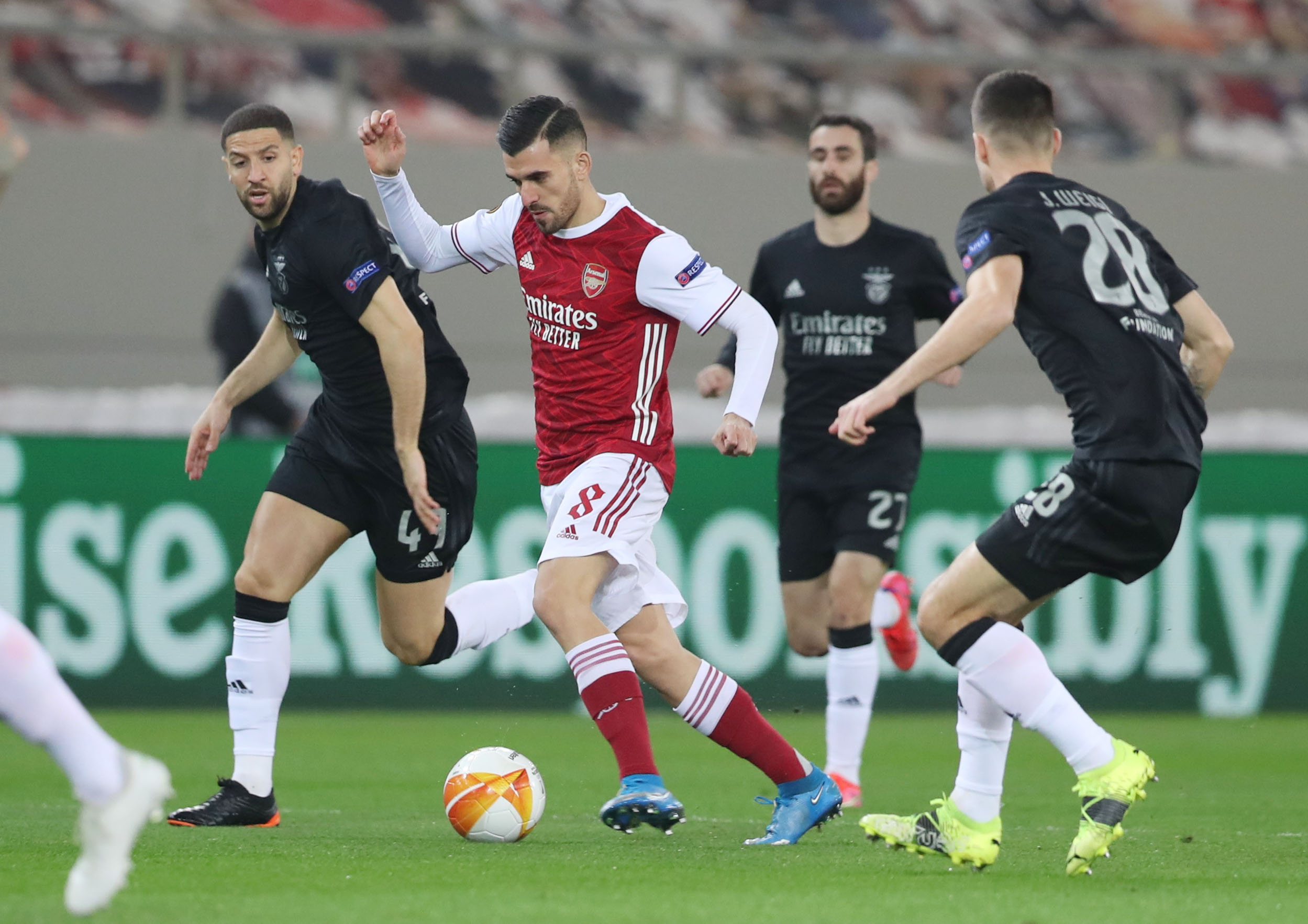