ARSENAL continued their winning start to the season with an enthralling 4-2 win over Leicester.

The Gunners were two up at half-time thanks to a double from the impressive Gabriel Jesus.

Gabriel Jesus scored twice and could have had another three against LeicesterCredit: Getty

A William Saliba own goal got the Foxes back into it before Granit Xhaka took advantage of some shocking defending.

Mikel Arteta’s side continue their 100 per cent record this season, as he looks towards Champions League qualification.

SunSport were on hand to keep up with all the action at a sold out Emirates this Saturday afternoon. 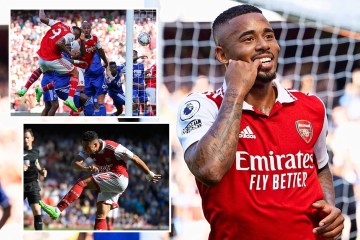 Made some solid stops in the first-half, but a slight lapse in concentration almost gifted Jamie Vardy a penalty.

Should have done better with the Maddison goal and will be disappointed with himself.

Had a pretty quiet game but dealt well with his defensive duties at right-back.

He is going to struggle to get in at centre-back this year so needs to make that spot his own.

Was looking comfortable all day until a horrendous own goal put Leicester back in the game.

The youngster managed to steady himself though and dealt well with Vardy all day.

A solid display and marshalled Vardy out of the game alongside Saliba.

Was a handful in the opposition box all day, and looks to be creating a decent partnership at the back.

What an incredible buy for the Gunners, completely changing the way Arteta’s side play.

Looks to be another key piece of the puzzle as the North Londoners continue to transform to a Pep Guardiola-style.

Looks to have stepped it up another level so far this campaign, making the Gunners tick.

He already has a brilliant relationship with Zinchenko, covering at left-back when needed.

Kept the Gunners ticking over and got the ball forward quickly to the attacking players.

Could have had a goal of his own after hitting the post late on and is getting forward more.

The Gunners captain struggled at Crystal Palace last week, but was back to his best here.

Found little pockets of space and picked up the ball on the half-turn that Leicester couldn’t handle.

Quiet by his exceptional standards, but kept going at his full-back all afternoon.

Will have better days at the Emirates with more influence, but just needs to find a bit of form.

Has continued his incredible start to the season with another lovely finish from outside the box.

Some lovely link-up play with Jesus, along with his work-rate down the left, make him an instant start.

What more can you say about this man? A stunning debut at the Emirates

Scored twice and could have had five as he terrorised Leicester all afternoon long.

EDDIE NKETIAH (84) – Put himself about and was busy at the end.