ARSENAL are reportedly set to open talks with Bologna as they eye up a summer swoop to sign full-back Aaron Hickey.

The Gunners have been heavily linked with a move for the 19-year-old, with club scouts said to have been impressed by his dazzling displays this season.

Bologna ace Aaron Hickey has been linked with a summer switch to join ArsenalCredit: Getty

Hickey – capable of playing as a left-back or right-back – has chipped in with five goals and one assist in 34 Serie A matches this term.

His stunning form saw him earn his Scotland senior debut in March, with a number of clubs understood to be keen to securing his services.

Newcastle have been touted as a possible destination following their £300million Saudi-backed takeoever.

Meanwhile Aston Villa were said to be keeping tabs on the defender prior to signing Lucas Digne in the winter transfer window. 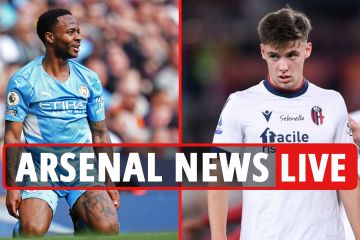 But it is the Gunners that are claimed to be leading the race, as they look to raid Bologna once again following their signing of Takehiro Tomiyasu last year.

According to Corriere de Bologna, Arsenal will hold talks with the Italian outfit imminently as a possible replacement for Nuno Tavares.

Tavares joined Arsenal from Benfica last summer, but has been plagued by inconsistent performances.

It has been said that Bologna are open to selling Hickey, with the club ready to accept offers in the region of £17million.

Napoli are also believed to be eyeing up a move for Hickey, but Arsenal are hoping to beat Luciano Spalletti’s side to his signature.

Hickey, who joined Bologna from Hearts in 2020, recently commented on speculation regarding his future.

He told Sky Sports: “I might want to challenge myself somewhere else and have a different experience, but who knows the future.

“I do see a lot of talk. It’s nice to know there’s interest from other clubs, it gives you some confidence.

“But you just keep your head down and focus on football.”