THEY say revenge is a dish best served cold – so no wonder Anwar El Ghazi’s killer finish was super cool.

The Aston Villa winger has waited two years for retribution after the stormy and shameful day the last time this pair did battle at Elland Road. 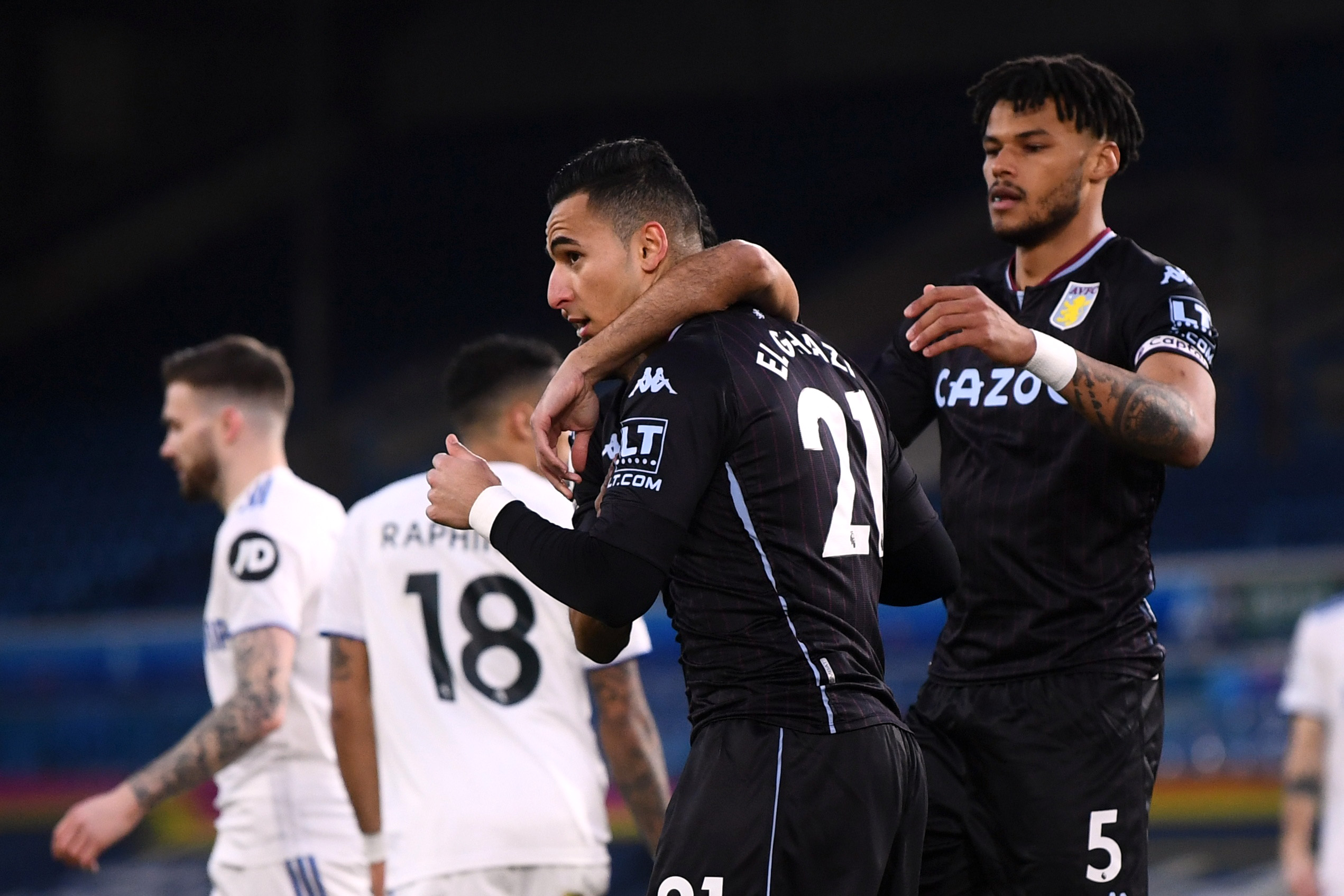 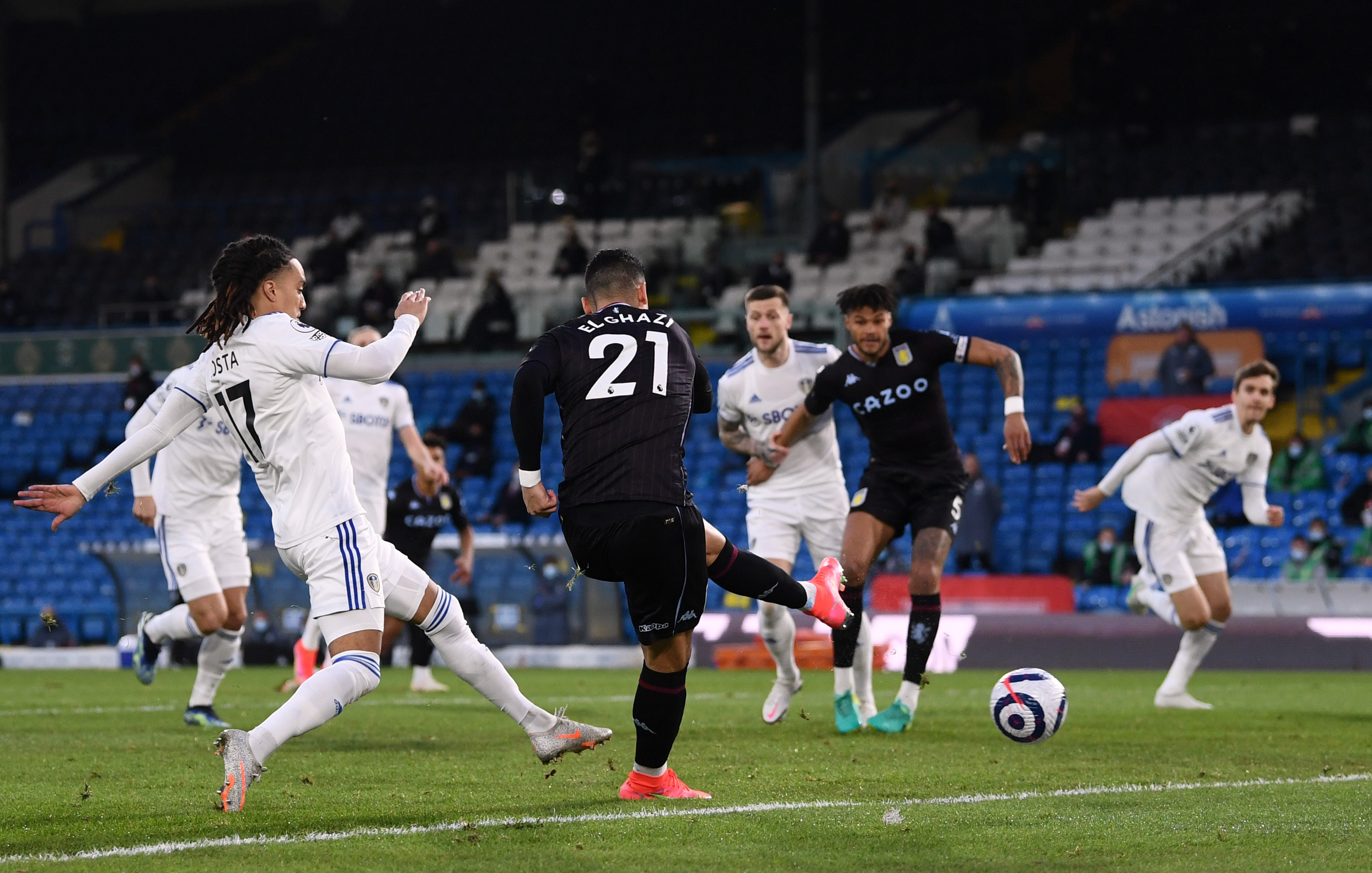 The midfielder netted after just five minutes in the Elland Road winCredit: Reuters

And he took barely five minutes to deliver payback with the goal which gave Villa victory – and proved they can indeed cope without crocked magic man Jack Grealish after all.

El Ghazi, of course, was wrongfully dismissed when these clashed in a late-season Championship showdown in 2019, as both chased promotion.

So ultimately a delayed justice back then…and ironic justice twice over in the opening minutes here last night.

First Bamford slipped as he tried to curl one into the corner, his feet going from under him and the ball bouncing too high on the shocking surface for Raphinha to reach at the far post.

Yet when the same happened as Ollie Watkins tried the same moments later, this time the ball found El Ghazi, who had ghosted in behind everyone.

The Villa winger – although in truth he was popping up all over the place – pulled it down, slipped it beneath Illan Meslier and that was that.

Well eventually it was, anyway. Such is life under VAR that at first even El Ghazi kept his celebration in check – until replays showed Liam Cooper had played him onside by a fraction. 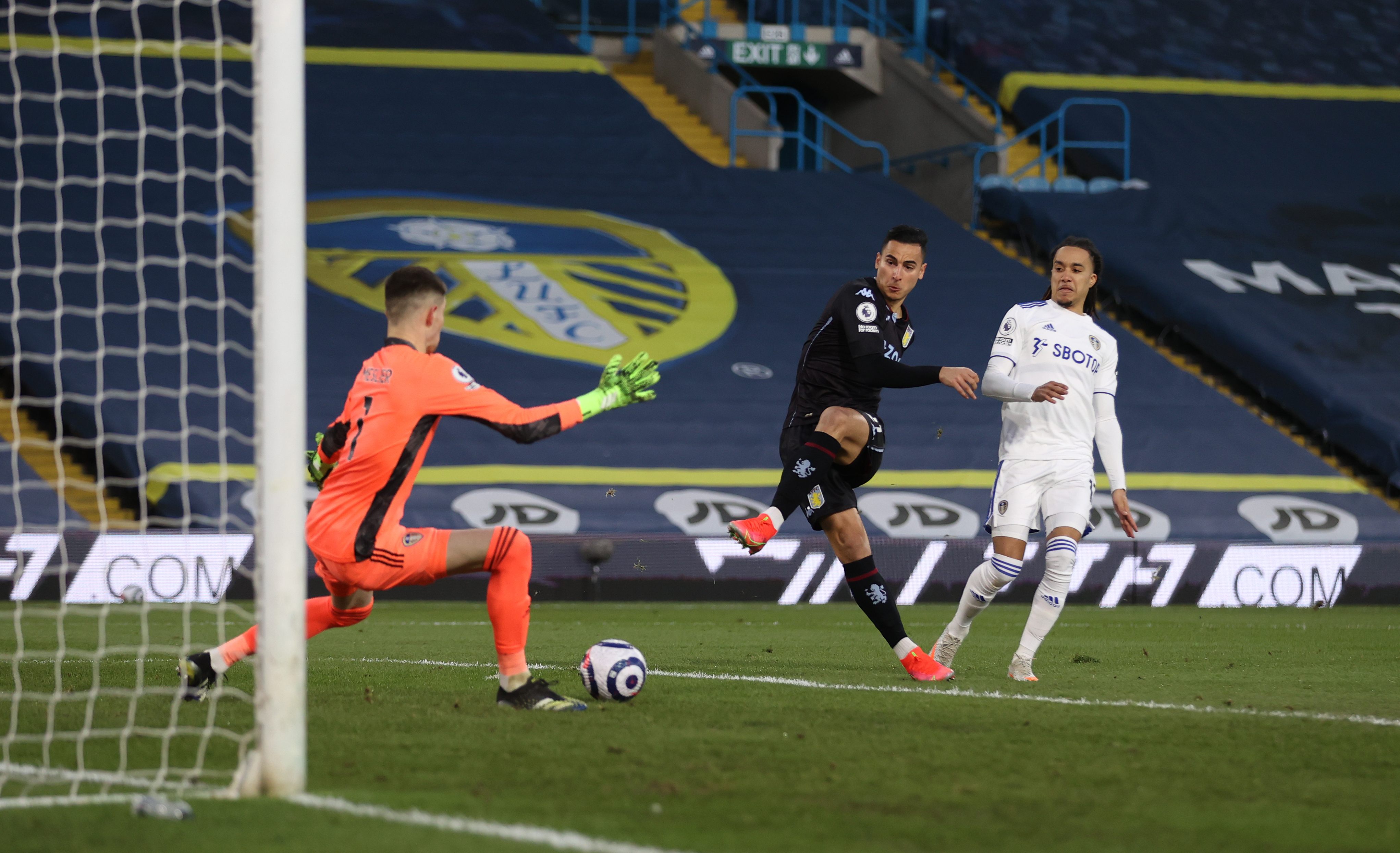 Leeds were left stunned as they conceded early onCredit: Mark Robinson – The Sun 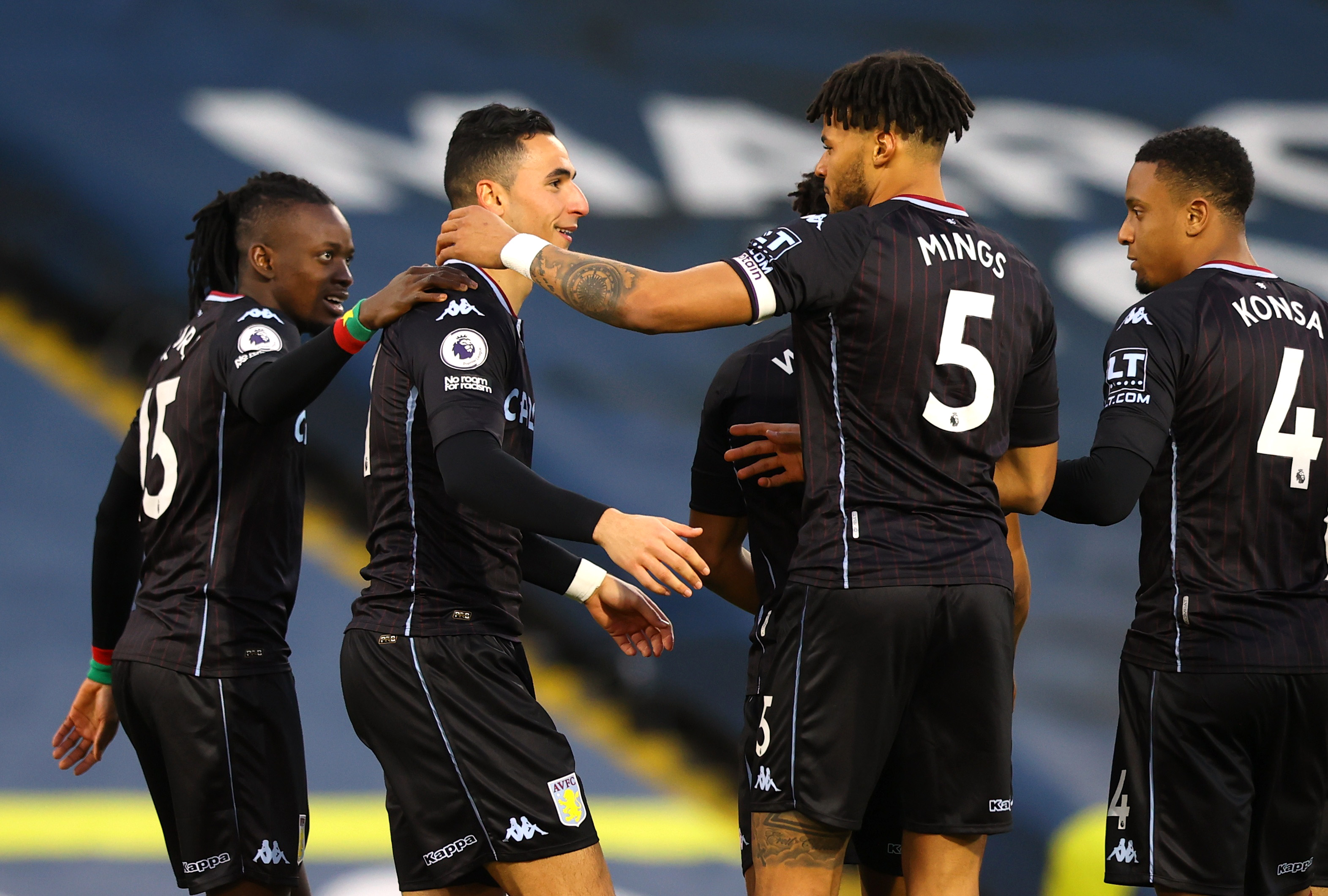 Villa were delighted to pick up a big three points on the roadCredit: Reuters

Officially an assist to Watkins, but don’t ignore the role the shocking surface played in it.

The Elland Road pitch was finally relaid in January, but is causing more problems than that particular cabbage patch did for Marcelo Bielsa’s side.

Perhaps they should switch to some of those grassroots and lower league arenas currently lying vacant, because even they would be better than this.

At times it was like watching a recording of Dancing on Ice as players slipped and stumbled their way around.

Leeds were certainly on skid row, as Villa – with an inspired El Ghazi at the heart of almost everything they created – oh-so dominant in the first half especially. 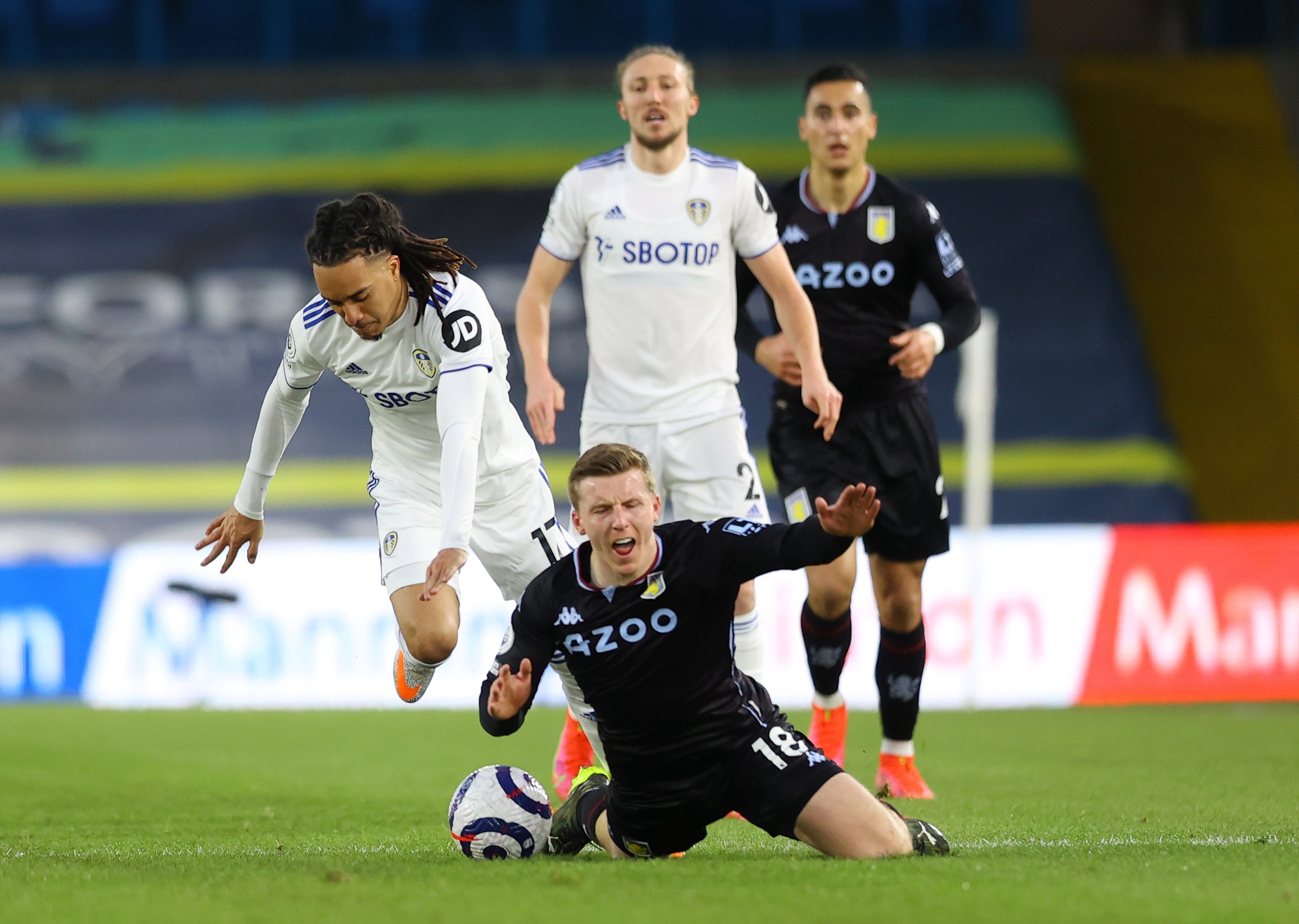 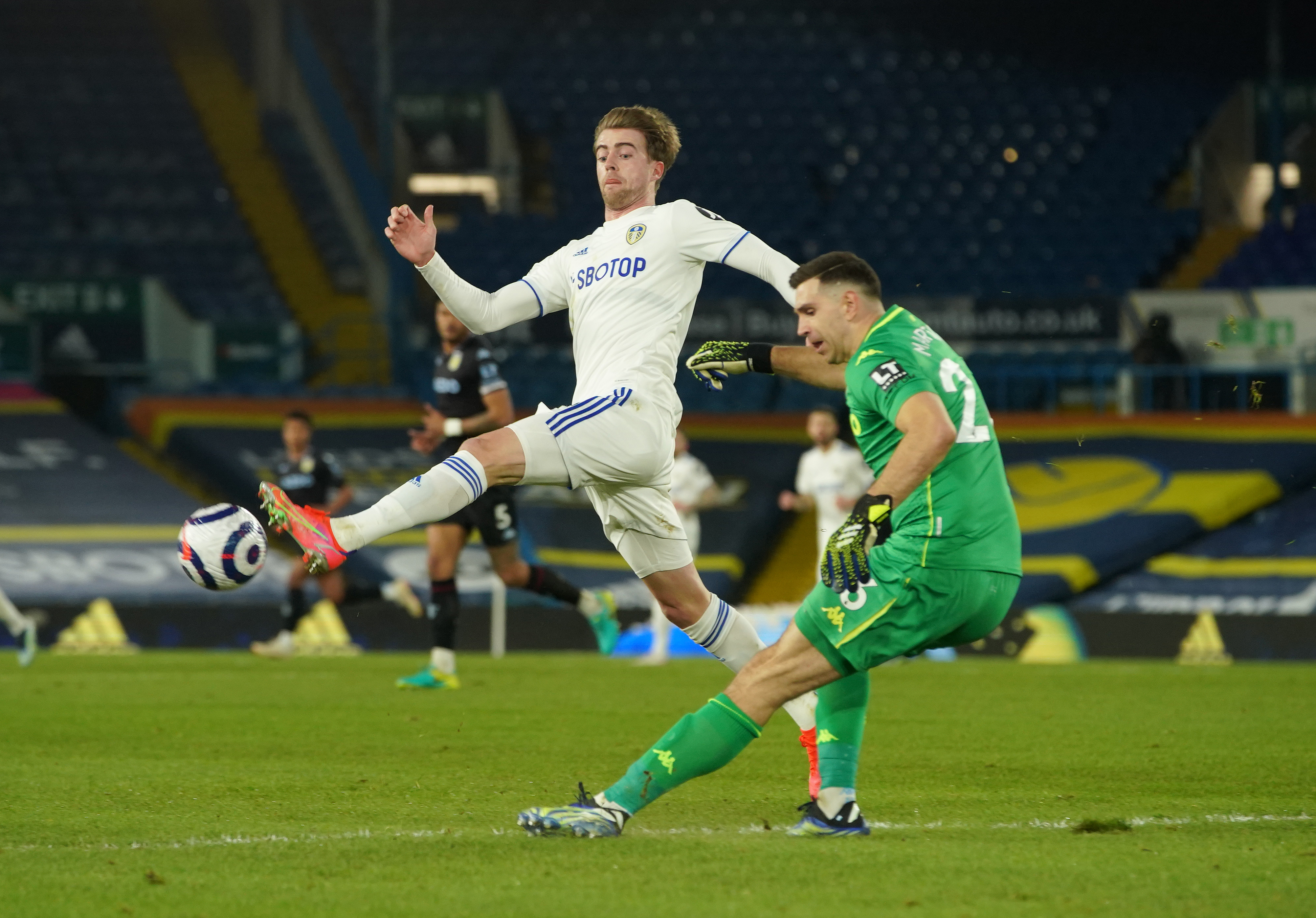 Patrick Bamford and Emi Martinez came up against each other numerous timesCredit: Ian Hodgson – Daily Mail

It is no exaggeration to suggest El Ghazi could have had a hat trick even before the break. Villa will certainly play far worse than this and wrap up games far earlier.

Leeds were still reeling from his fifth minute opener when he cut inside Pascal Strujik, and stung Meslier’s fingertips with a rocket.

Another edge-of-the-box fizzer had keeper Meslier diving to his left to deny him a second, and then a rat-a-tat one-two with Watkins ended with his drilling just wide.

No wonder a furious Bielsa was throwing his arms up in frustration on the touchline at the way Leeds, the hipsters’ darlings, were being outplayed.

Yet with the fleet-footed Raphinha in the ranks, there is always a chance. Make no mistake, the Brazilian is ultimately destined for far bigger employers than this. 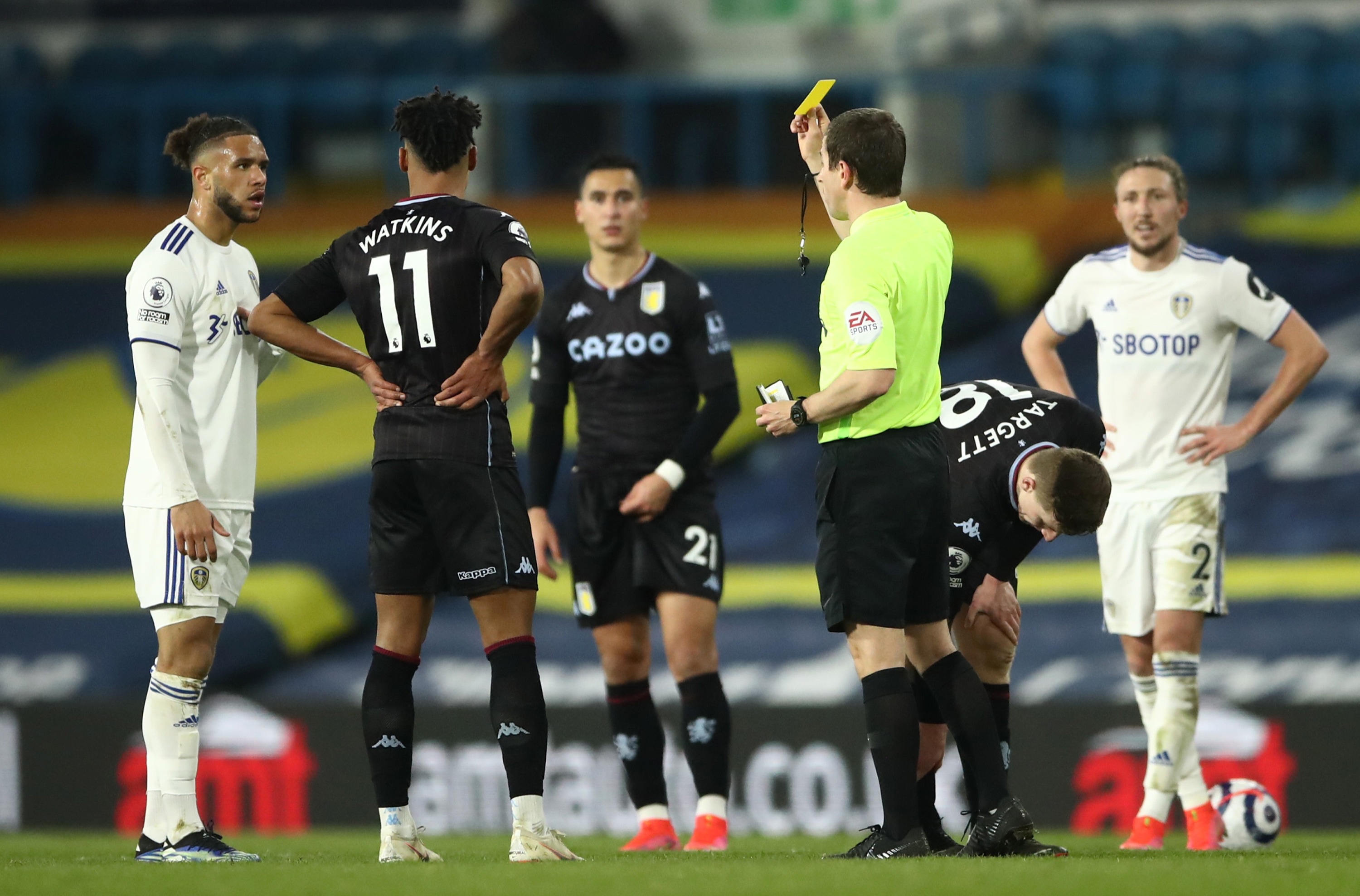 Both sides did not hold back challenging for the ballCredit: Getty – Pool 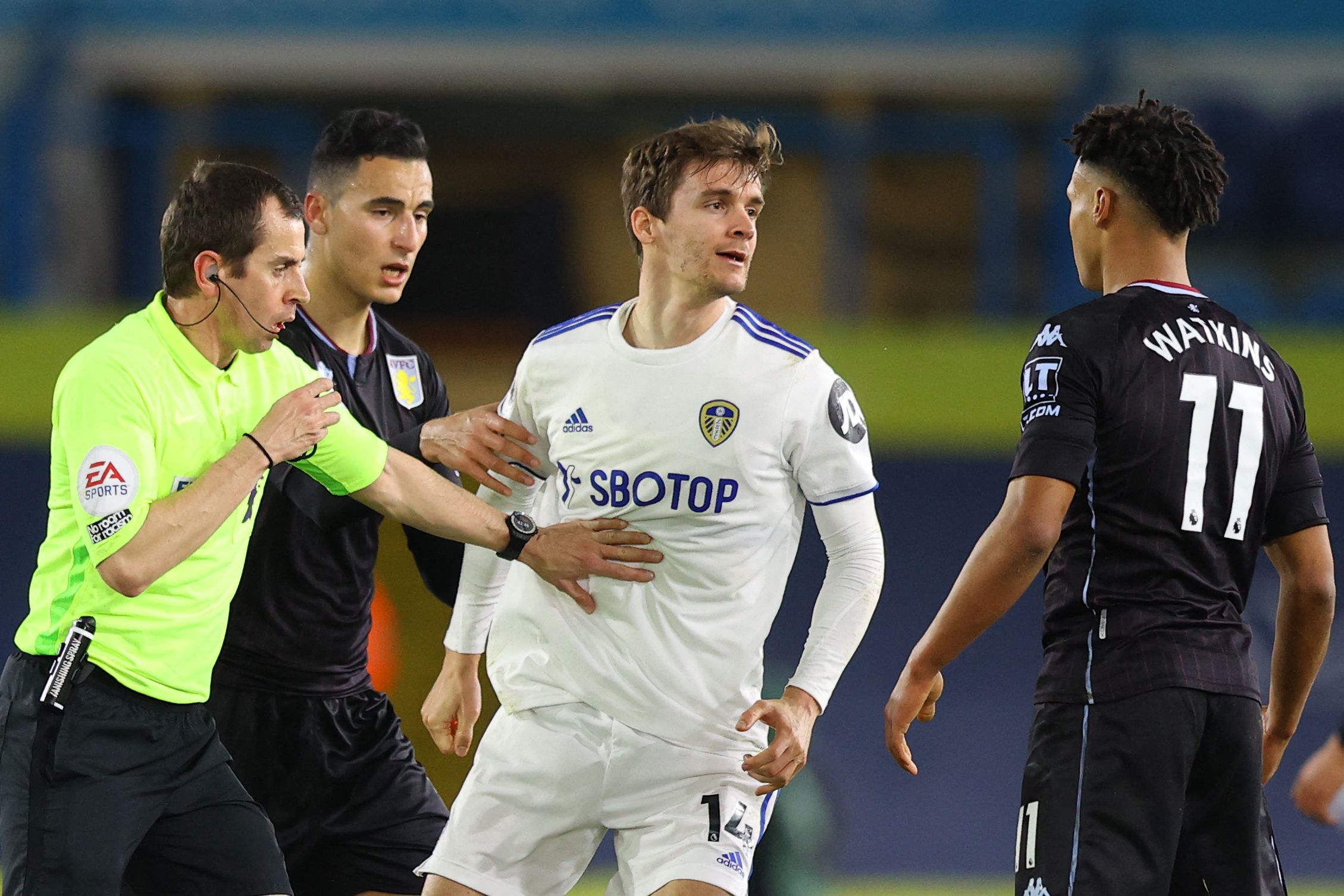 There were a few intense moments in the Saturday evening battleCredit: AFP

He always looked the home side’s likeliest source of salvation, and his dynamic bursts with the ball-on-a-string at the end of his toe were like watching Ryan Giggs at his very best.

So no surprise that Raphinha had Villa at sixes and sevens with one darting run ending with a shot blocked by Ezri Konsa Ngoya – ironically as he became the latest to slip over.

It pinballed back off the Brazilian straight to Tyler Roberts, and keeper Emiliano Martinez beat away a strike when he really shouldn’t have had a prayer.

Yet in the main Villa, marshalled superbly by the towering Tyrone Mings, barking out instructions that echoed around Elland Road, were as tight as cramp at the back.

And as the minutes ticked by you could visibly see the frustration creeping into the ranks of those in white. 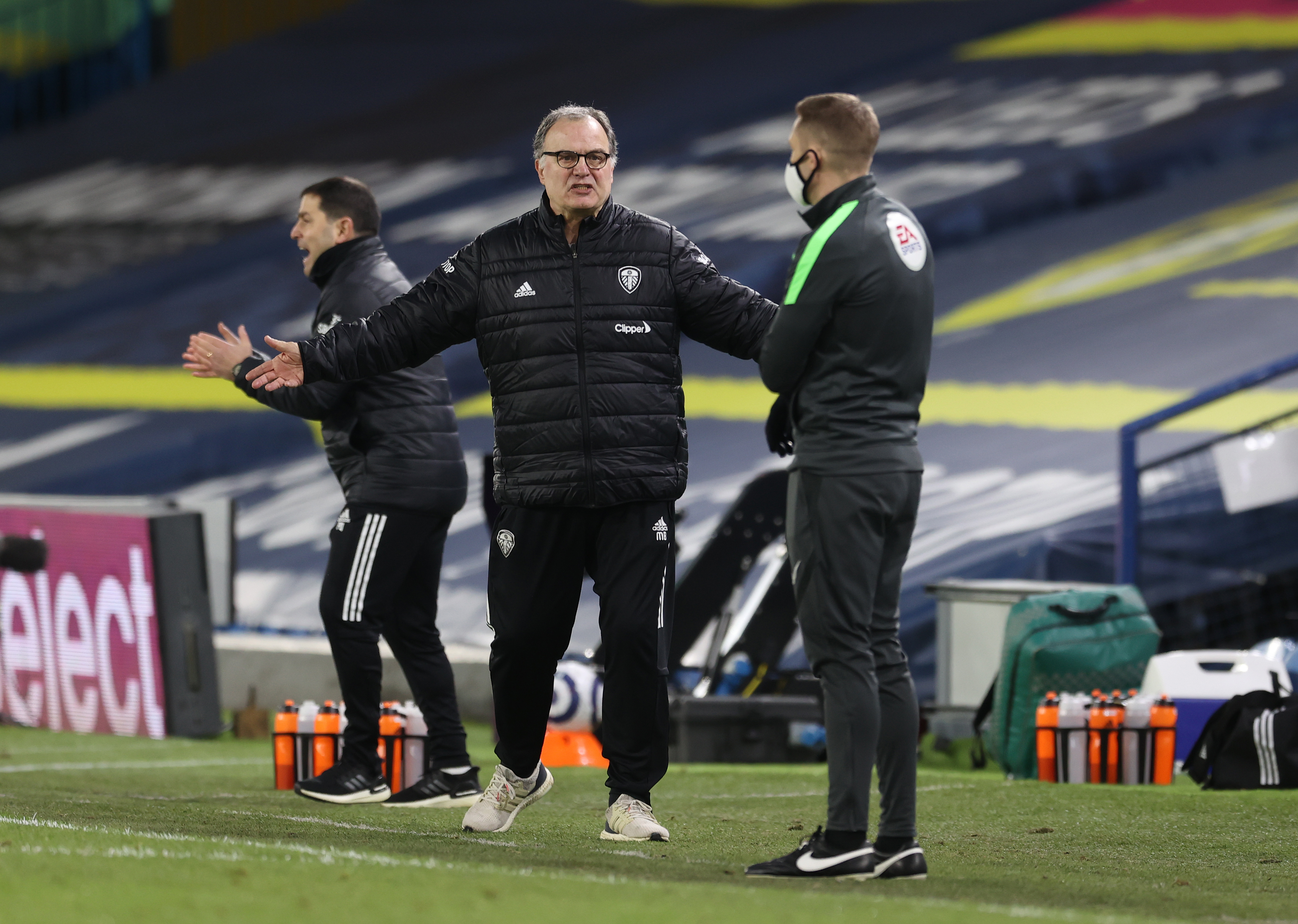 Marcelo Bielsa was his typical animated self on the touchlineCredit: Mark Robinson – The Sun 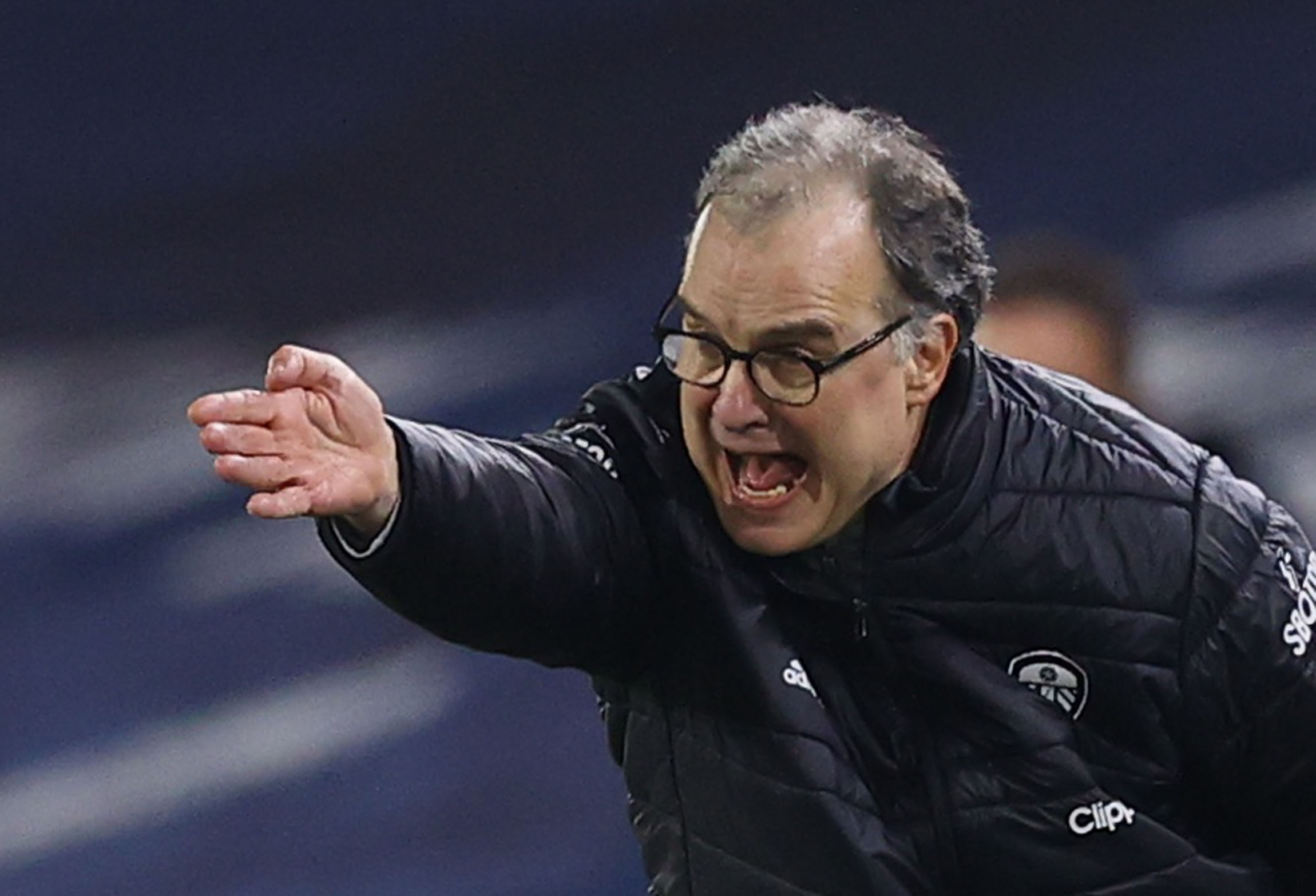 The Leeds boss will have been disappointed to lose at homeCredit: Reuters

Roberts was lucky to escape with a yellow for swiping a petulant arm at Matt Targett after a tangle which saw both booked, while a flick of the boot also saw Mateusz Klich carded.

Villa just needed that second goal to give them a bit of breathing space as Leeds desperately tried to save by throwing everything at them in an increasingly frantic finale.

Yet for all that, only Raphinha’s downward header really raised pulses in the visiting defence, and in the end there was really no argument as to who was their hero.

Much more of this and they’ll be renaming him El Grealish.