THIS is the shocking moment a drag-racing car crashes into fans in North Carolina.

One woman was left with ‘serious injuries’ after the horrific incident which occurred at Wilkesboro Dragway last weekend. 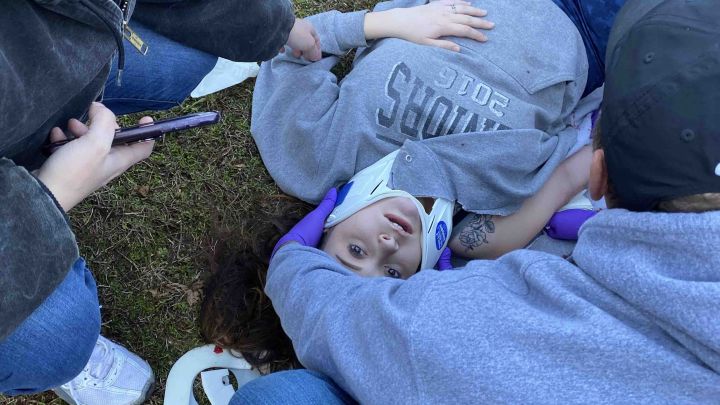 Stunned spectators watched as a Ford Mustang lost control before crashing into a railing in front of them.

It then ripped apart against the metal pole of a scoreboard, cleaving the vehicle in two, with one person heard exclaiming: “No way.”

Incredibly, the driver of the vehicle suffered no injuries as he crawled from the wreckage, and he even declined treatment from first responders.

But one woman in the crowd, later identified as 22-year-old Amber Garner, suffered a broken arm in four places as well as an open wound.

She was immediately rushed to hospital and, as of last Saturday, was set to undergo at least two surgeries.

A note from her sister Ashley read: “My family needs help raising money to help my sister.

“We were at a drag race at Wilkesboro and a car lost control and struck her. She will need multiple surgeries and physical therapy.

“Her arm is broken in four places and broke her knuckle. We would really appreciate any donations since she does not have insurance.

“She is such a fun-loving amazing person and didn’t deserve this. Anything helps!”

A picture on the GoFundMe page showed Amber in a neck brace waiting to be transferred to hospital.

And she has since described the traumatic scene in an interview from her hospital bed.

Amber told Fox 8: “There were two cars that were racing and I guess one of them lost control.

“It hit the guardrail where I was at and went over it and hit me on the side of my arm.

Just saw the wreck from the dragstrip in Wilkesboro yesterday. Hope everyone is okay..

“As soon as it did hit me, I guess I fell on the ground.

“I blacked out so I don’t know exactly. I thought that it [my arm] was gone.”

The owner of Wilkesboro Dragway, Phil Halbedel, has since claimed Amber ‘should not have been’ standing by the scoreboard, The Journal-Patriot reported.

And he added that the crashed Mustang was a ‘poorly-made car’.

A statement released by Wilkesboro Dragway on Saturday read: “Unfortunately we have had an accident at the track and will need to call of test and tune for tomorrow.

“We have some sensor issues and guard rail damage. Please say a prayer for the racer and for the lady that is injured.”