It starts with a whisper. A couple of mentions online. You begin to recognise the name, but nobody has actually seen them. Numbers paint the picture. Then the first sighting at some niche age-group tournament, perhaps a mention in the local press. Grainy YouTube footage. Next, a domestic debut. The whisper has become an echo. Yells for full international honours fill the air. Now everyone is aware. It’s that rare beast – the prodigy.

“He has a little chink in his armour,” said Ricky Ponting in commentary as Prithvi Shaw prepared to bat. “I think it’s the ball that comes back into him. He quite often leaves a gap between bat and pad, and that is where the Aussies will target. Starc will try and swing one back through the gate.” Shaw’s off stump went jack-knifing across the Adelaide Oval seconds after Ponting had explained how it would happen. It was the second ball of the Test. Shaw would face another four balls before being dumped for the remainder of the 2020–21 series between Australia and India. He is yet to face another Test delivery.

Shaw is the ultimate prodigy. Scouted on the streets aged three, his mother died a year later. He was raised solely by a father who gave up his business to prioritise his son’s talent, and the two of them moved to Mumbai aiming to stand out among the billions of limbs gripping cricket bats.

At 14, Shaw made the highest recorded competitive score since 1901: 546 in one innings, for Rizvi Springfield in the Harris Shield. Most boys that age spend time deleting their internet history every 15 minutes, yet Shaw spent his time breaking records. He was clearly special.

Eighty seconds was all it took for expectations to become infinite. Sports magazine show Transworld Sport gave the worldwide reveal. A 12-minute segment on the 15-year-old Shaw told his story. After 80 seconds the viewer is told they are hearing from the next Sachin Tendulkar. India, your next 15,921 Test runs have arrived. There’s a deep acknowledgement as the raw teenage eyes look down the lens. He knows expectations are already stratospheric. Perhaps it’s fear at what is to come.

“People expect me to play for India and be just like Sachin, so there is a lot of pressure. I don’t think I will achieve as much as him, he was very special,” he says. A boy who plays a game for fun is having to sit in front of a TV camera and dampen grown adults’ wild fantasies at what he can become. The ICC followed with an online profile of Shaw. “The next Sachin?” At least they had the decency to pose it as a question.

A year later, Shaw made his Test debut. He did not disappoint, scoring 134 against West Indies at Rajkot in 2018. He was the youngest Indian batsman to score a century on debut. What could go wrong?

Serena and Venus Williams at the US Open in 1999. Photograph: Jamie Squire/ALLSPORT

What does the prodigy offers us that simple greatness doesn’t? It’s the hope of something better. There is no ceiling. Tendulkar can’t score any more than 15,921 runs. Michael Jordan can’t score more than 32,292 points. Diego Maradona can’t win more than one World Cup. But the prodigy? Who knows what they can achieve?

The prodigy hasn’t yet cheated on their partner, tweeted their support of an abhorrent government or spouted problematic views. They are a flawless representation of what we love in sport. Unblemished. The future. The prodigy can be groomed from an early age, like the Williams sisters and Tiger Woods. Or sometimes they burst on to the scene in a flash, like Wayne Rooney.

The sporting prodigy feels exotic, something so rarely seen that it causes rational people to lose all sense of perspective. We are drawn to them. If we knew about them before others did, we become possessive. Every success for them is a success for us. Maybe it’s some perverse version of a parent wanting to live through their child. Instead of a parent, we are the sports obsessive who can’t play at the highest level. All of this feeds into our expectations for the prodigy.

US sports do the prodigy best – of course they do. Annual player drafts are million-dollar glitzy events on primetime TV, watched by millions. Thousands of fans sit for hours in an arena to watch a suited man stand on a stage and announce names. Then there are the hundreds of hours of reaction. Teams are graded on how they did in the auction and how their future now looks.

The allure of the prodigy can override even the desire to win. In the NBA, Philadelphia 76ers general manager Sam Hinkie undertook a project he dubbed “the process”. Essentially it was about building uncompetitive teams to stockpile the top draft picks, thereby increasing the chance of landing that coveted franchise-changing star. It was the hope that lured him in.

Cricket is an individual sport posing as a team sport, so can be unforgiving on the prodigy. Underperformance in most team sports can be hard to attribute to an individual, but not in cricket. If the prodigy is not performing, it is clear for all to see. Ponting knew Shaw had at least one weakness. Of course he does. He’s a kid playing an adults’ game. But elite athletes are ruthless. They have to be to survive. 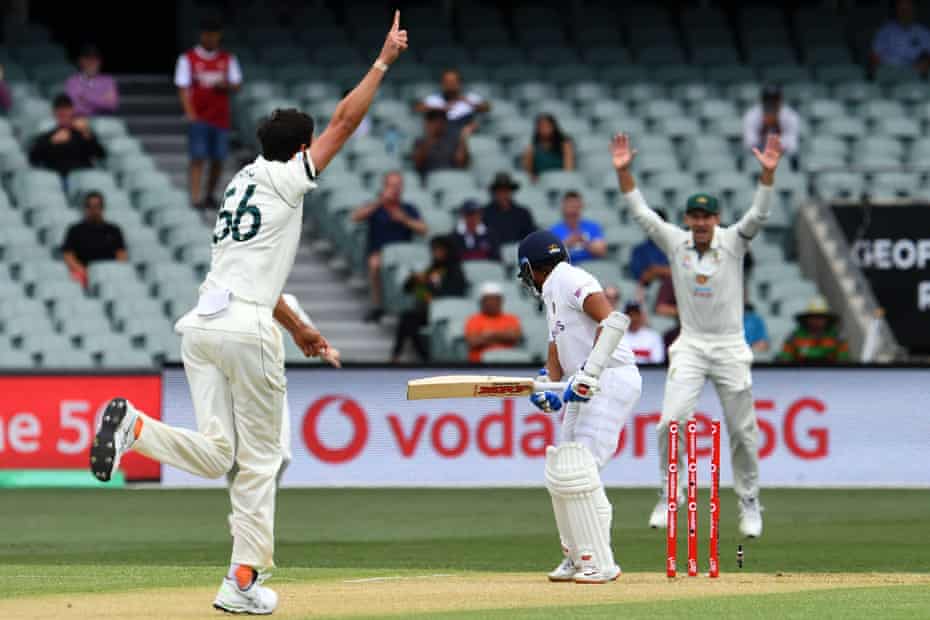 The problem is that we’ve bought into the prodigy. Our expectations didn’t factor in weaknesses. When we first see a prodigy we imagine the endpoint. We see what they could look like and substitute it for what they should look like now.

On a Cricbuzz panel show in April 2019, Michael Vaughan couldn’t get enough. “I see glimpses of Sehwag in Prithvi Shaw… he’s obviously young but has great technique. He is a wonderful player with plenty of great years ahead of him.” Shaw was 19 years old. On the same show just over a year later, Vaughan’s tone had changed. “He’s been around for a few years now… yet is still very inconsistent. He’s put on a pedestal too soon, maybe he’s not as good as we first thought.” Shaw was 20 years old.

What changed so drastically for such a transformation in tone? The ending of the teens and the beginning of the twenties? Were expectations so great that if it hadn’t all been achieved by the age of 20 then it would never be achieved at all? It’s easy to dig out Vaughan but he is not alone in this kind of thinking. We all do it to some level. That desire for instant gratification feels like it mirrors wider societal trends.

Clearly it is sometimes prudent to take a young player out of the firing line and we are not privy to the conversations between management and player. But the rhetoric around Shaw as he was dropped in Australia was uncomfortable. No public reassurance and no acknowledgement that development at Test level is a process.

This only goes to fuel the burning desire from the sports fan for that instant success. If we don’t see success immediately then we turn from one extreme to the opposite. Hope for the prodigy is cut off. Shaw became a toxic subject, unwanted with his career barely begun.

Insane natural ability they may have, but there is inevitably some learning to be done when the prodigy is exposed to the highest level of competition. It is only rational that a period of adjustment is required. Unfortunately, the prodigy does not attract rational thinking. There is no time to acclimatise and learn from mistakes. Instant returns are expected or we start to look to the next in line.

The next man dropping off the prodigy conveyor belt was Shubman Gill. He made his first on Boxing Day at the Melbourne Cricket Ground no less. With his manicured hair and broad shoulders, you’d take Gill home for Sunday dinner in a heartbeat.

He looks every bit like the 21st-century cricketer. That’s before he has even hit a cricket ball, which he does with extreme poise and grace. Search for Shubman Gill on YouTube and the word “classy” appears in the title of at least 75% of results. He is a wet dream for the ex-player turned pundit who doesn’t want to study numbers but simply watch and talk instead. 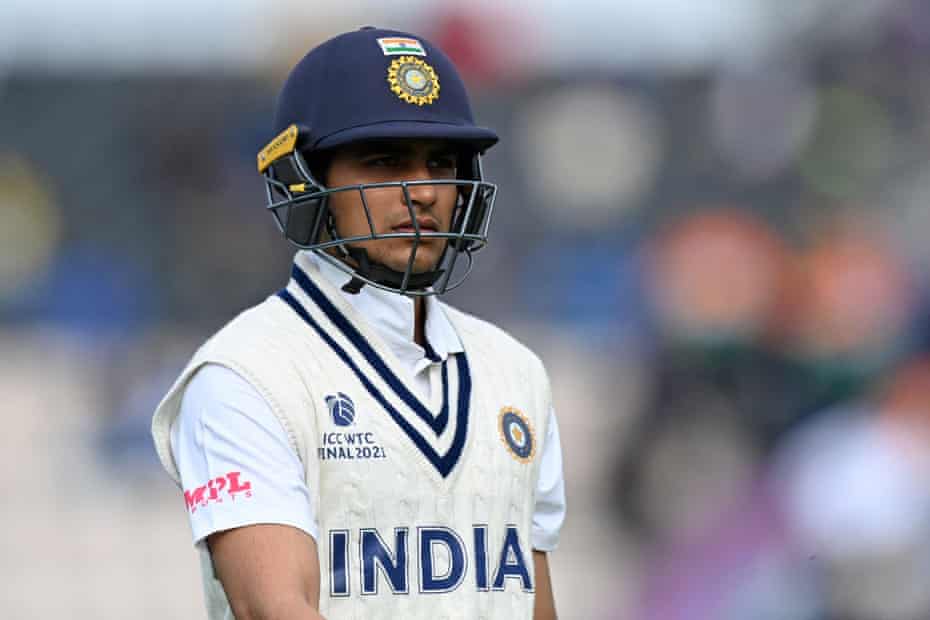 Shubman Gill walks back to the pavilion after losing his wicket against New Zealand in the World Test Championship final. Photograph: Glyn Kirk/AFP/Getty Images

Arriving at the crease, Gill appeared the shiny new toy to last year’s discarded Christmas present. Shaw was easily tossed to the side. Even Gill’s crisply blank bat hints at a clean slate.

Of course, none of this was Gill’s fault. A prodigy in his own right, the opportunity was arguably overdue. He is an incredible talent. Gill and Shaw have progressed side by side through Indian age groups. It culminated in Gill playing vice to Shaw’s captaincy as the Under-19 World Cup was captured in 2018.

Gill was impressive for the remainder of his debut Test series. Not quite Shaw levels of debuting, but still very promising. Both players were named in Cricinfo’s “20 Cricketers for the 2020s”. The prodigy production line firing on all cylinders. Yet something isn’t sitting right. Expectations for Gill are high, whereas for Shaw they are infinite. Gill still has a chance. It feels like Shaw doesn’t have a hope. You now feel the cross-hairs starting to focus on Gill.

The first sign of success and the sharks start circling. Averaging a tick under 50 after the first home Test against England earlier this year, a reporter decided it was time to scrutinise Gill’s performance, questioning Virat Kohli on the nature of Gill’s dismissals. The captain’s glare in response gave a clinical answer.

We can’t help ourselves. As soon as there is a sniff of weakness, we are ready to pounce. Gill and Shaw have played 11 Test matches between them. The figures are irrelevant on such a small sample size. Yet, we feel it’s all we need to pass judgment. Gill and Shaw are 21. Barely old enough to drink, get married or drive a car. They are already well ahead of their peers in playing at the very top of their industry. They are young men who need to make mistakes, who don’t have all the answers and shouldn’t have all the answers.

To expect them to be fully formed cricketers, let alone adults, is to rob them of part of their life. It becomes dangerous to deny them that space. They are pecked at until they break. We know this script. From Diego Maradona to Len Bias to Paul Gascoigne, from Amy Winehouse to Macaulay Culkin to Lindsay Lohan. It’s rarely straightforward being so good so young.

We are never going to get what we want from prodigies. It’s all a set-up. Right from the start, they are playing a game they can never win. By being so good, so early, they have lost. They can never satisfy our expectations. Shaw signed off the Transworld Sport piece with a veiled warning to the viewer: “I can only be who I am.” It feels prophetic, like he knew what was coming. His long walk along the green mile.

Originally in issue 34 of the Nightwatchman, Wisden’s cricket quarterly. Get 10% off an annual subscription when you use coupon code GSN12 (12-month subscriptions) or GSNDD (recurring subscriptions) at the checkout. Print and digital formats available.