The third ball Jonny Bairstow faced at Trent Bridge last week was an inswinger and he flicked at it without effect as it passed him and into the keeper’s gloves. Staring back down the wicket at the bowler’s retreating form, with quiet intensity, it was possible he was trying to get a look at the ball in the bowler’s hand. It was, after all, the first red one he had seen in a match this season.

Bairstow’s performance in the first Test suggested two things. First, that there is nothing wrong with his colour vision. And second, that he may be on the verge of a considerable comeback. The batsman suggested no less on Wednesday, when he positively vibrated with joie de vivre. It was, pleasing to spend some decent time at the crease, he said. “If I keep doing what I was doing in those two innings – keep with that method and approach and mindset – hopefully there’s a fairly big one to come soon.”

Going from the Hundred to a Test match is not so much a gear shift as it is swapping a rally car for a Rolls-Royce, but Bairstow made the switch more smoothly than several of England’s batters. One evening he was “trying to hit as many balls into the River Taff” as he could. The next day – after a 150-mile drive to Loughborough and a compulsory Covid test – he was facing Stuart Broad and Ollie Robinson in the nets with the Dukes ball. “It was, obviously, slightly different,” he said with a chuckle.

The key, he says, has been to manage his own expectations: “I was content, yeah. I was happy.” Hemade only 59 runs in the opening Test, but they were important ones. The Yorkshireman stuck beside Joe Root like an emotional support animal in both innings, quietly helping the England captain score his side out of trouble.

It was a calmer, quieter Bairstow than the one-day version, content to play a slow-scoring role while Root busied about with the run-getting. And he rode his luck, just a little. Hustling for first-innings runs, a throw from the deep would have run him out halfway up the pitch if it had gone to the right end. He cut and missed at Ravi Jadeja’s spin and there were enough lbw shouts to persuade India’s quick bowlers that he is still vulnerable to the straight ball. 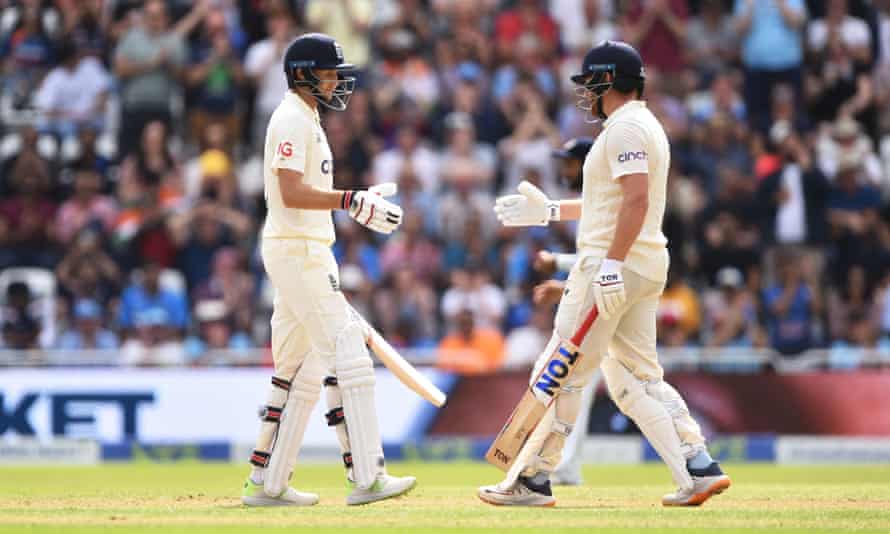 There was plenty to admire, too. When he came out in the second innings, England were effectively 40 for three and Mohammed Siraj was looking deadlier than he had all game. This was a proper tussle and one Bairstow may have considered himself to be winning until he played a magnificent hook shot on 30. It was only as his eyes followed the ball on its trajectory to deep square-leg that he spotted the fielder there.

Just like Moeen Ali, Bairstow has returned to the Test fold flying high from the Hundred. Captaining his team has given him wings. It is a role he says he has “thoroughly enjoyed and really relished”, which will offer Gary Kirsten little solace given England, rather than the Welsh Fire coach, are poised to reap the benefit.

Bairstow led from the front in the first two games of the new tournament, dancing around his crease and laying into the ball with enough power to cause blunt-force trauma. At times his open-chested stance has resembled Captain America squaring up for a throw down with a Nazi super-soldier and there is a look on his face that suggests that he can, indeed, do this all day.

The signs Bairstow is back in dangerous form have been hiding in plain sight. In June, his super-heroism extended to scoring a 48-ball century on one leg, having injured his ankle in a Blast innings against Worcestershire. The England coach, Chris Silverwood, has noted that he seems as happy as at any point in the past two years.

“It’s been tricky hasn’t it?” said Bairstow, reflecting on a period that has not always been easy for him. “There’s been a lot of different cricket, a lot of changes in circumstances.”

In February, he gave up a payday in the Big Bash League to reclaim his Test spot against Sri Lanka, averaging 46 in the two-Test series. It was “a good trip” and he enjoyed batting at No 3, but then came three ducks in four innings on the India tour.

Bairstow remains phlegmatic about those scores, pointing out that on difficult turning wickets no one on either side scored big runs. And while he has been moved about the order yet again, he looks genuinely chuffed to be back in a middle order that has spent plenty of time at the crease with each other over the years.

“It’s something we can latch on to,” he said. “There’s some very fond experiences of batting together. Being able to recall those experiences and relish those partnerships is something we’ll definitely be able to have a chuckle about before and during [the Test].”

Bairstow is a player who likes to be needed and England, with their brittle top-order batting, need him now. Do not bet against the big one and fairly soon.