ENGLAND were snared in a web of spin and deception and now look certain to lose the Second Test.

With Joe Root being dismissed for just six – his lowest first innings score this winter by 180 runs – England were routed for 134 in their first innings. 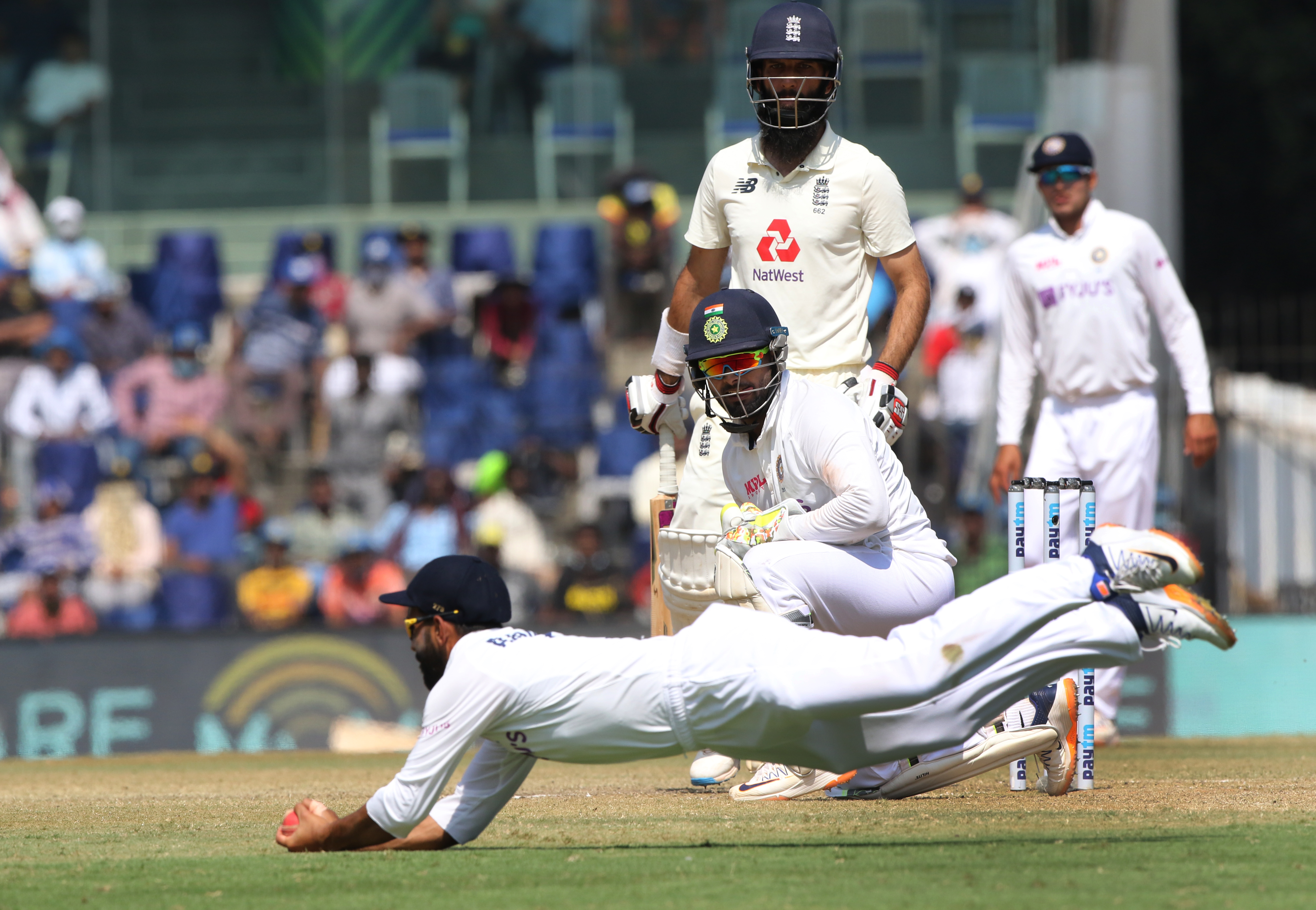 Moeen Ali is caught by Ajinkya Rahane after his edge deflected off the wicketkeeper’s legCredit: PANKAJ NANGIA 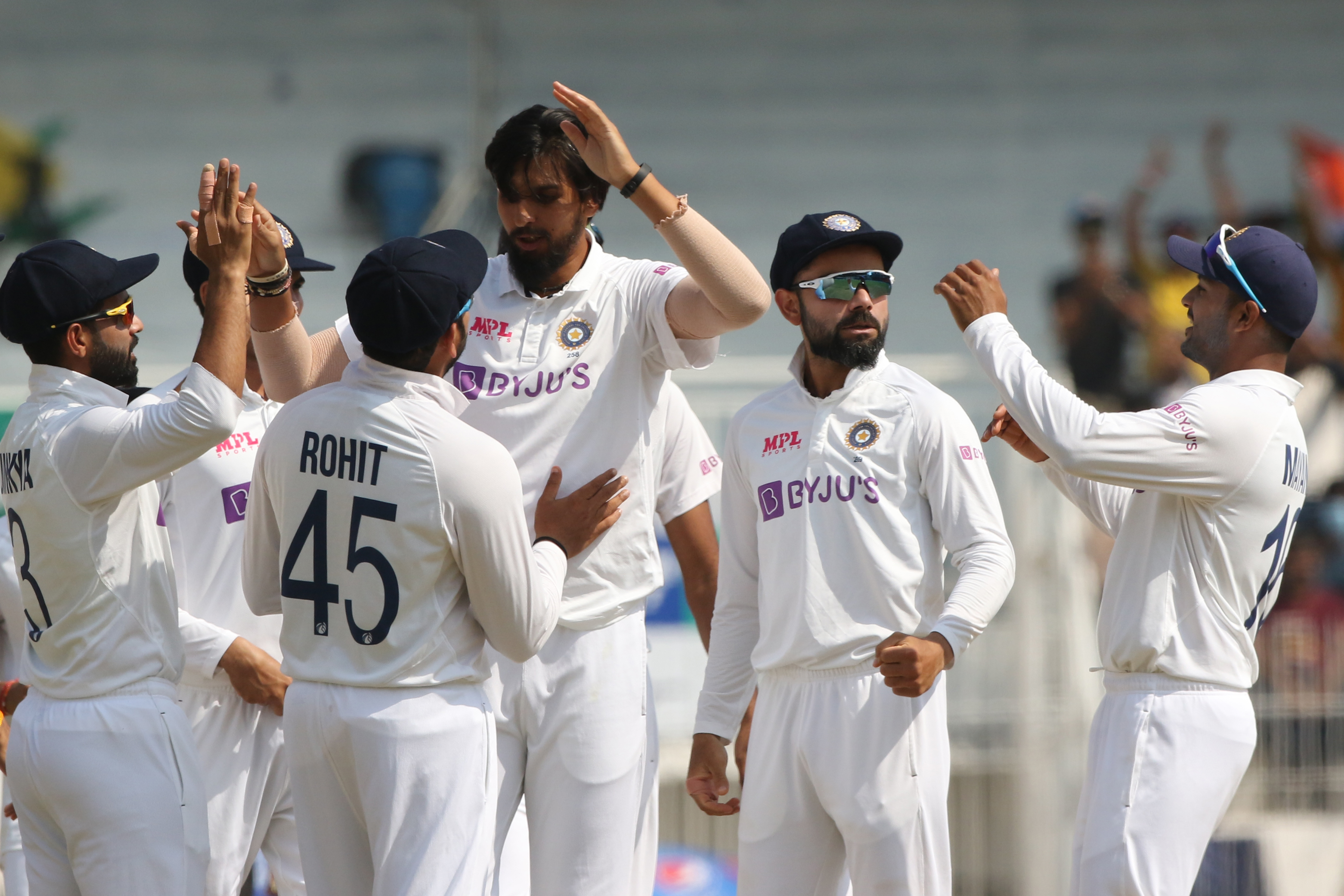 India skittled England all out for just 134 on the second dayCredit: PANKAJ NANGIA

The surface on which they batted was more like a lunar landscape than a cricket pitch. The ball turned, bounced and exploded with alarming regularity.

India’s bowlers exploited the difficult conditions and England’s batsmen had no answer. Only wicketkeeper Ben Foakes, playing his first Test for two years, offered much resistance with an innings of 42 not out.

Former Indian left-arm spinner Murali Karthik, part of the world feed TV commentary team, described the pitch as being made of ‘powder and pebbles’.

Sir Andrew Strauss, in the Channel 4 studio, said it was ‘poor’. Another ex-England captain, Michael Vaughan, reckoned on Twitter that it was a ‘shocker’.

After losing the First Test, India wanted a spitting, spinning surface on which to take advantage of their strengths.

It is nonsense having the ball creating puffs of dust and explosions of dirt almost every time it landed. Clearly, a sub-standard pitch for Test cricket.

But the truth is that, even though India won a vital toss, England allowed the home team to score far too many in their first innings when Rohit Sharma played a brilliant innings of 161.

England’s bowlers – and the recalled Moeen Ali, in particular – were not able to exert anywhere near enough control.

India added to their lead and, by the close of day two, were 54-1 and having an impregnable lead of 249 runs

England took the final four Indian wickets for 29 runs in the morning but their own first innings was soon in ruins.

Rory Burns was lbw third ball to Ishant Sharma. He called for a review, which showed the ball brushing leg stump. That’s a second duck on the trot for the Surrey opener.

Dom Sibley was caught at leg slip attempting a sweep shot. The ball brushed the back of his bat.

Dan Lawrence gloved the final ball before lunch to short leg and then Ben Stokes was bowled by a beauty from Ravichandran Ashwin that dipped and turned past the left-hander’s outside edge. Stokes was furious, swishing his bat on the way back.

Ollie Pope and Foakes batted together for 15 overs of relative comfort but, when quick bowler Mohammed Siraj was summoned for the first time, Pope was immediately caught down the legside.

It was a fine, diving catch by wicketkeeper Rishabh Pant, who gathered the ball at the second attempt after it initially popped out of his gloves. 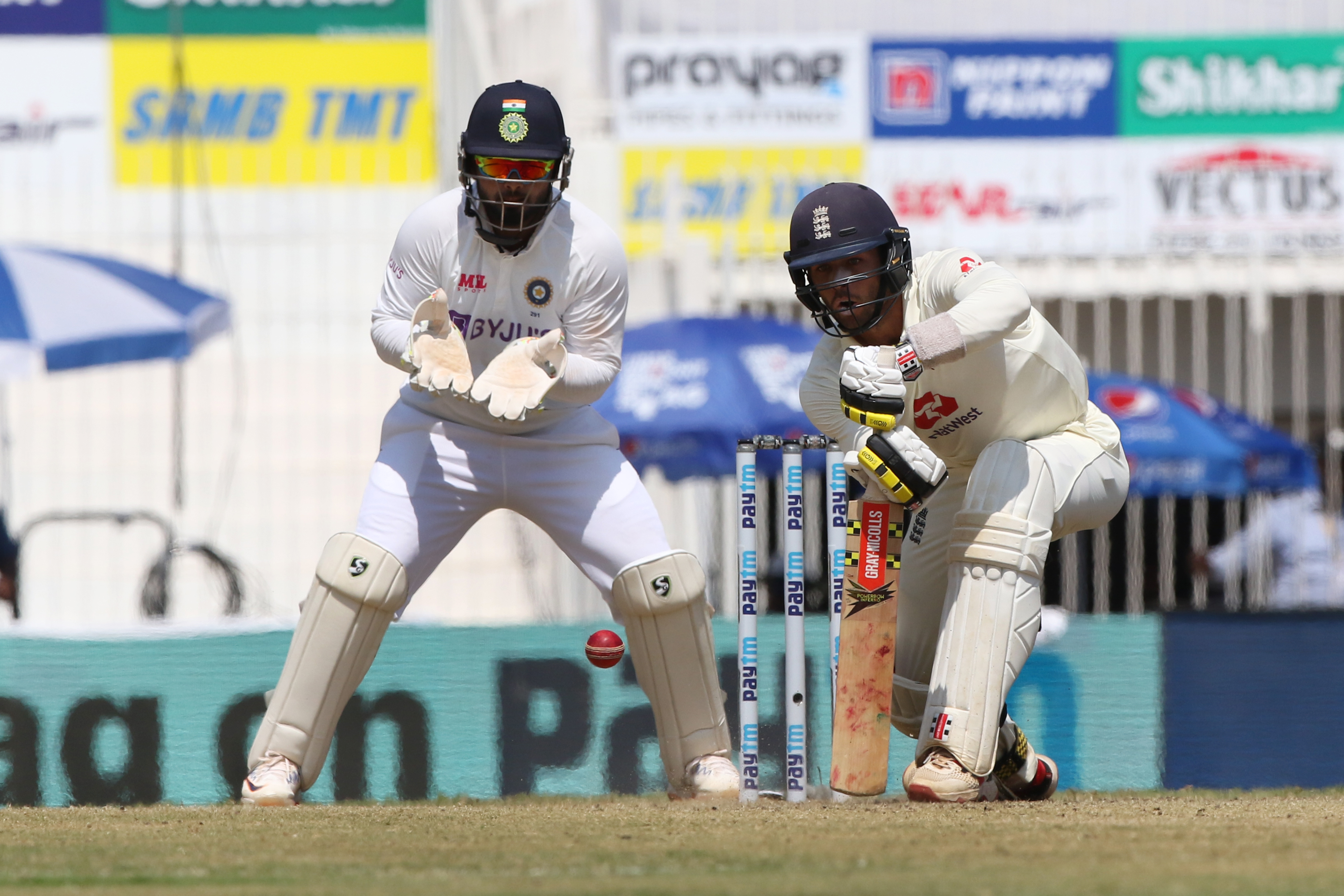 Ben Foakes was England’s top scorer with an unbeaten 42 in his first Test for two yearsCredit: PANKAJ NANGIA 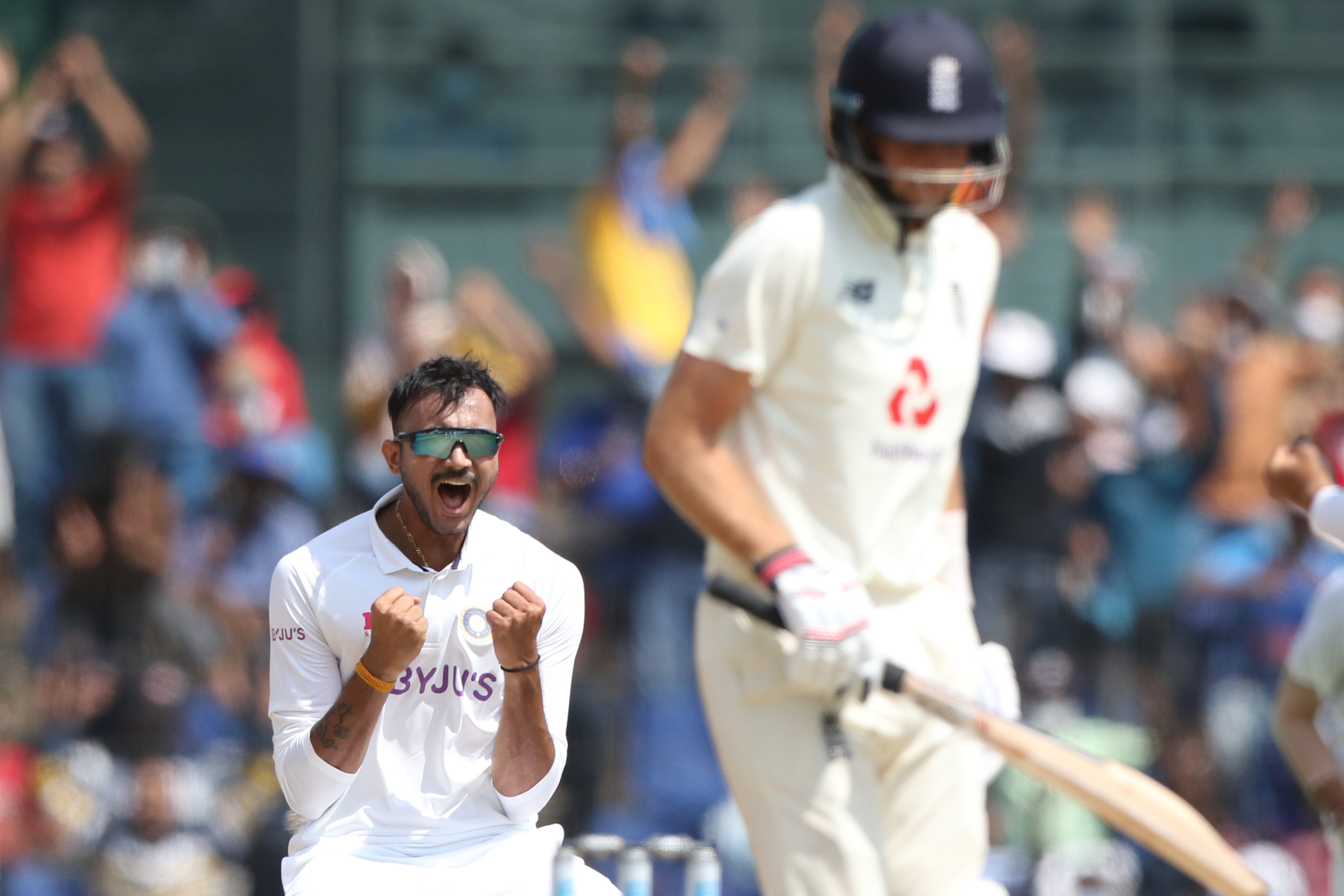 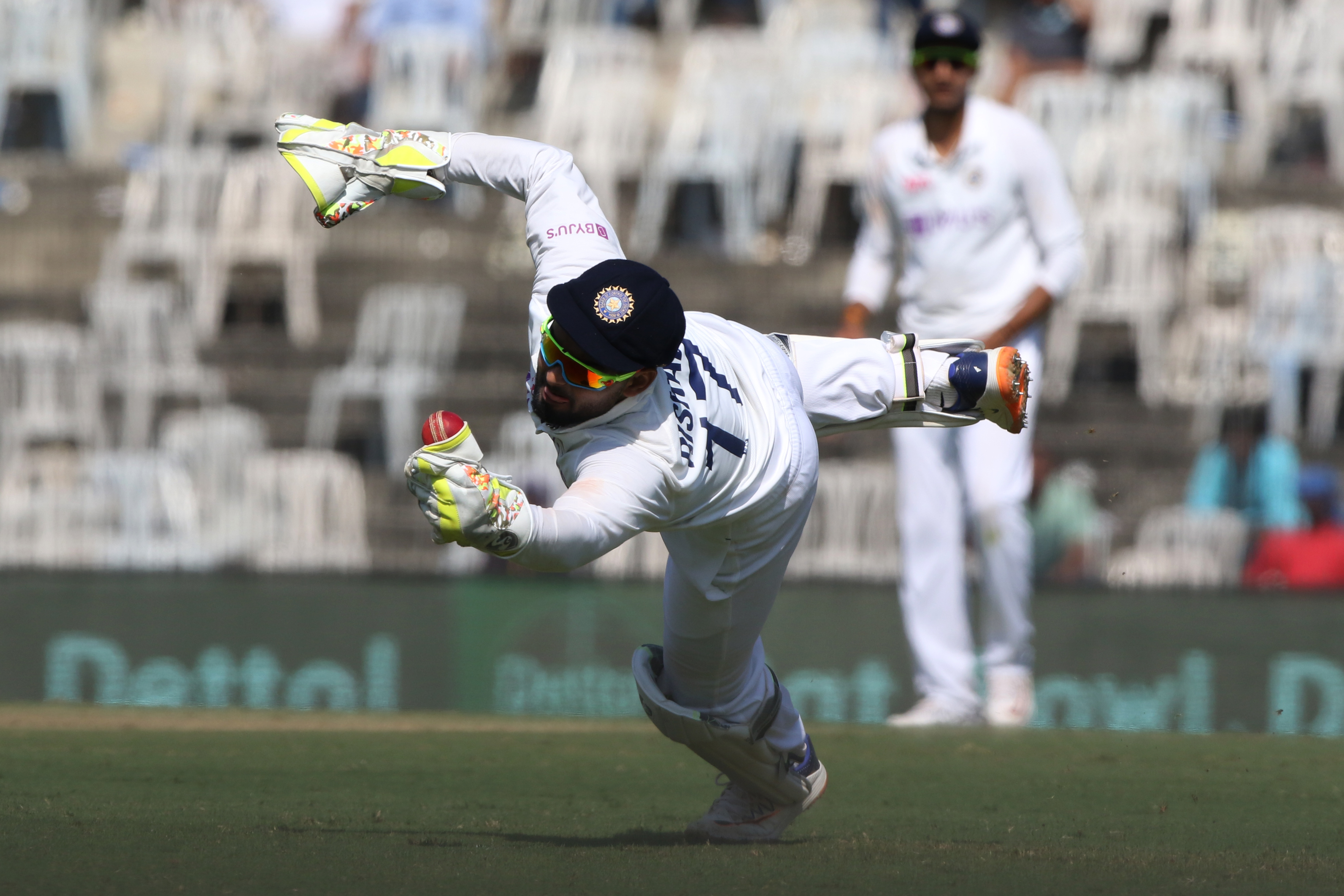 Moeen edged the first ball of an Axar spell, it struck Pant on the thigh and Ajinkya Rahane, diving forward at slip, clung onto the rebound.

Olly Stone clipped Ashwin to short mid-wicket the ball after being dropped by Pant and Jack Leach’s edge was snaffled by another fine diving catch by Pant.

Stuart Broad missed an attempted slog and was bowled for a duck with Foakes stranded.

When India batted again, there was more review frustration for England.

England reviewed an lbw against Rohit but on-field umpire Virender Sharma ruled the batsman had played a shot. Clearly, he hadn’t – his bat was tucked well behind his front pad.

It meant the impact outside off stump eliminated any chance of an ‘out’ decision. To increase Root’s irritation, ball-tracking showed the ball would have hit Rohit’s middle stump.

Rohit was then given out lbw to Leach aiming a reverse sweep but replays showed he had edged the ball. 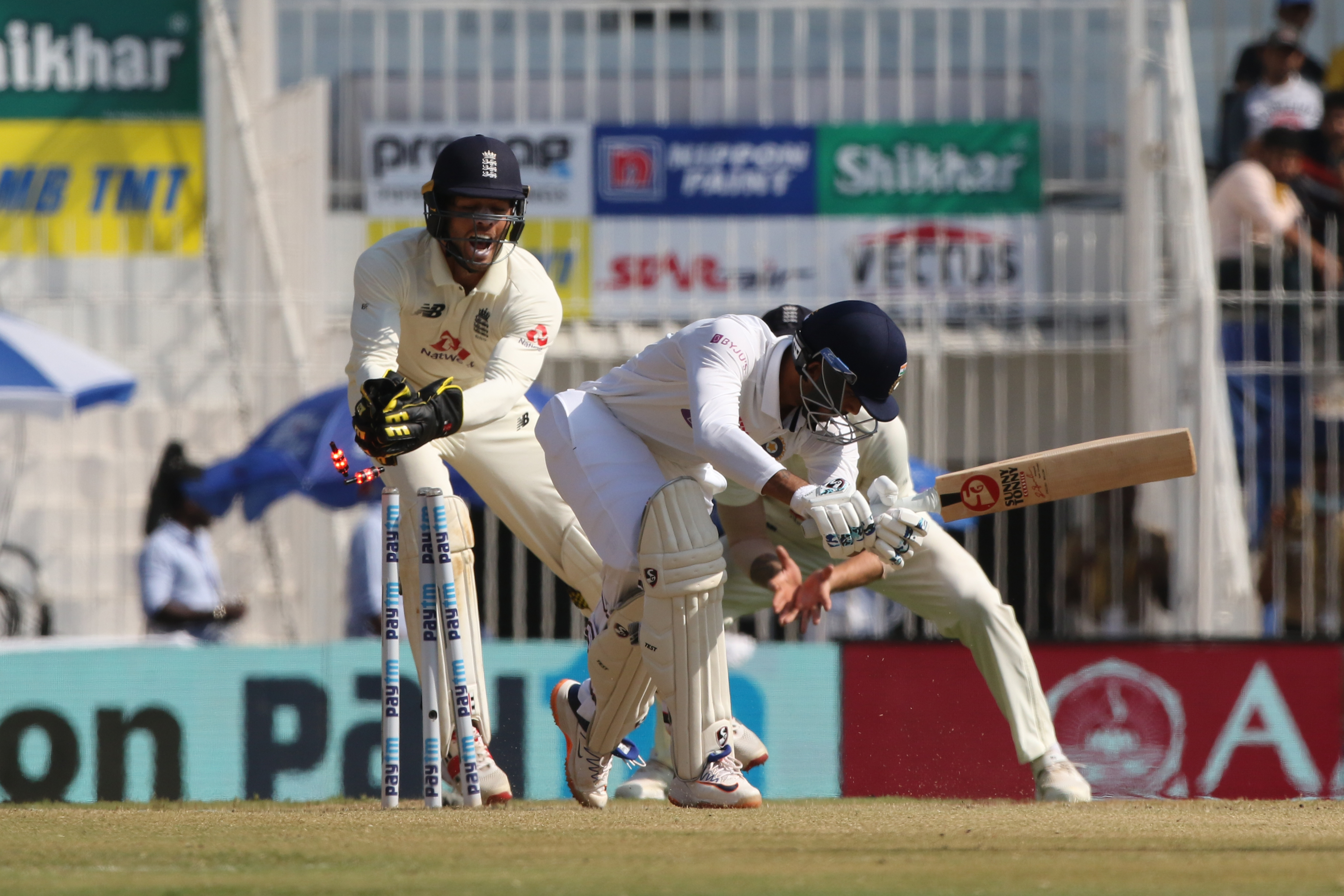 Foakes attempts a stumping as he replaced Jos Buttler with the glovesCredit: PANKAJ NANGIA 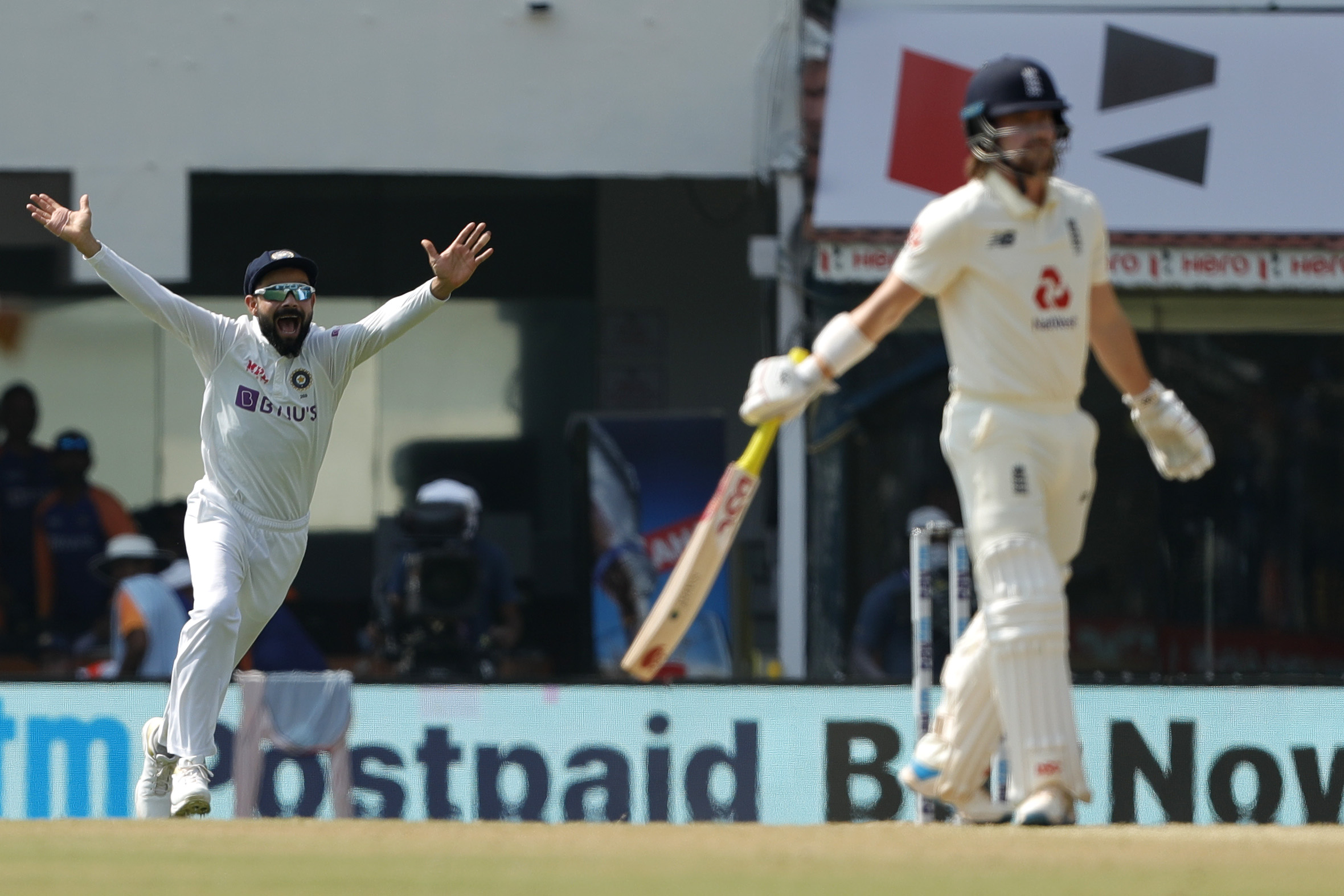 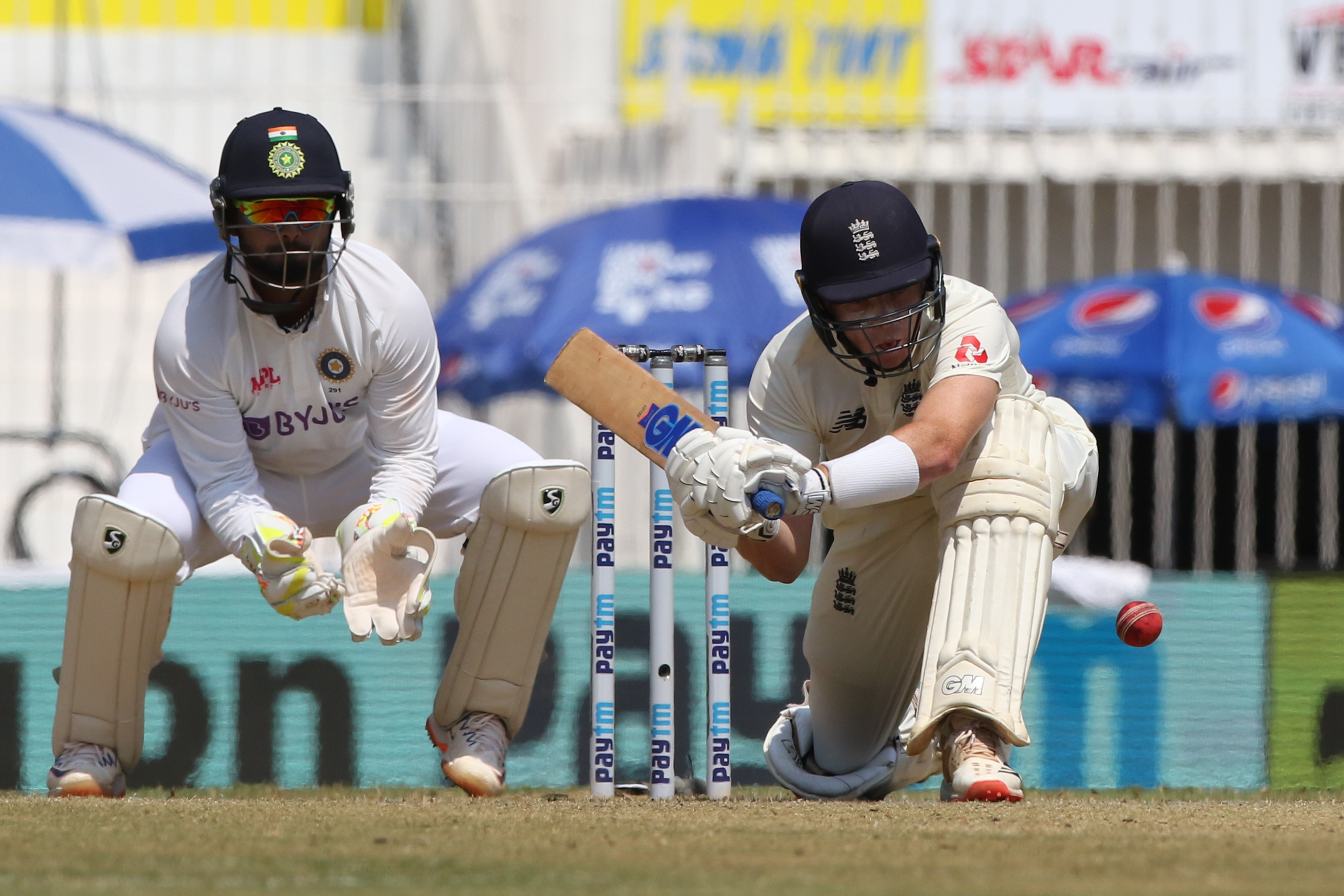 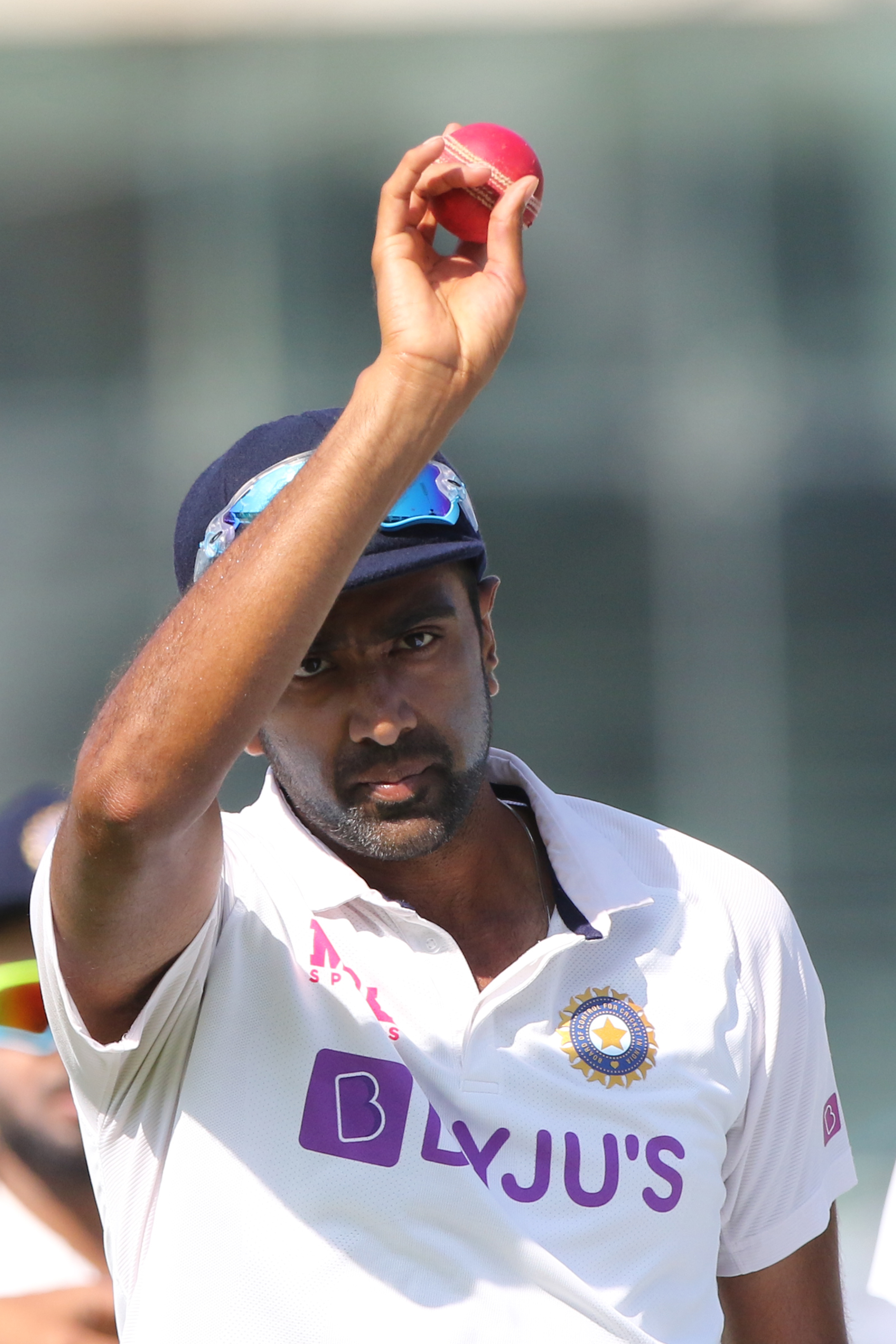 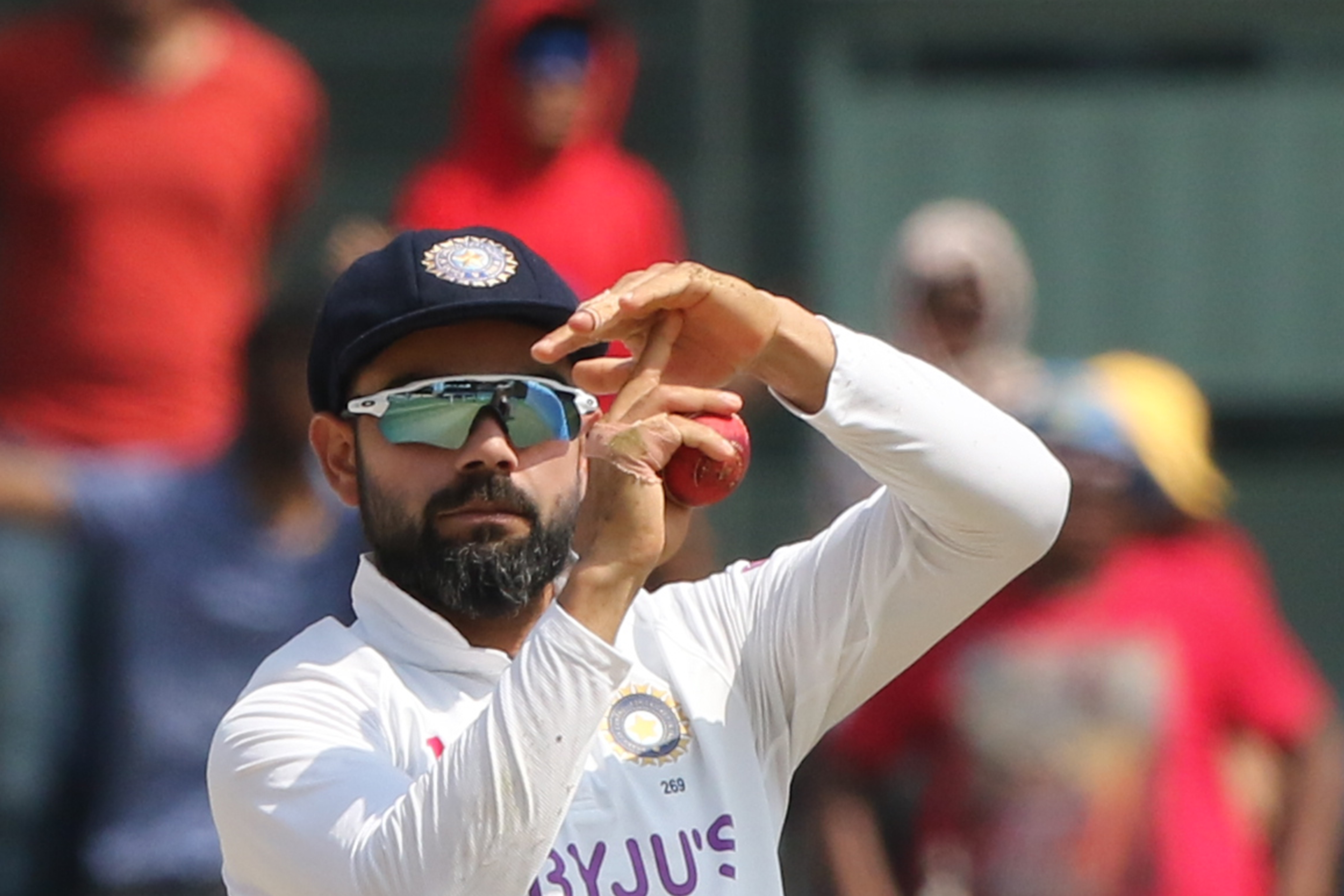 Virat Kohli’s side are well in control and lead by 249 runs in ChennaiCredit: PANKAJ NANGIA 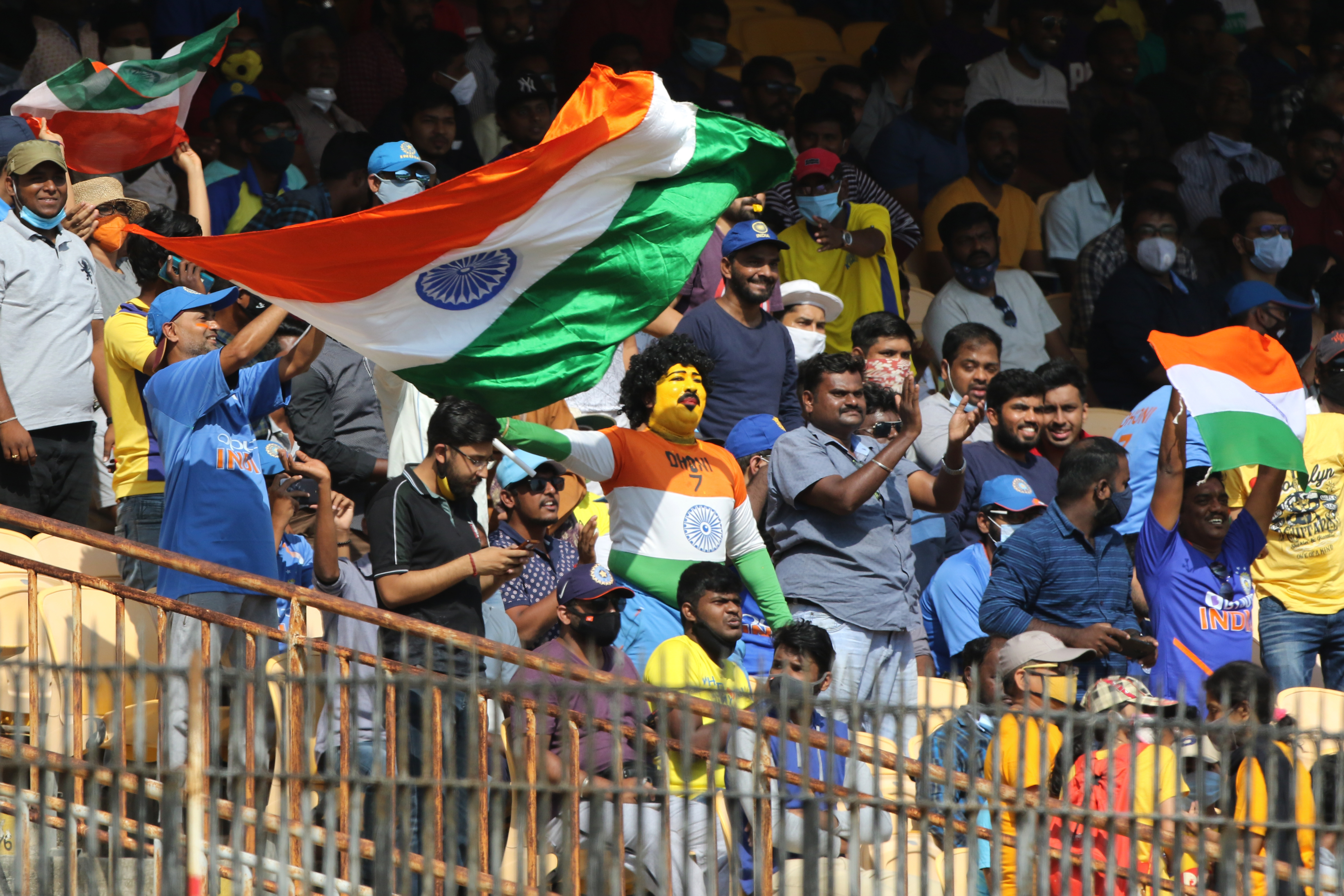 A vocal reduced-capacity crowd was inside the ground to cheer on their heroesCredit: PANKAJ NANGIA