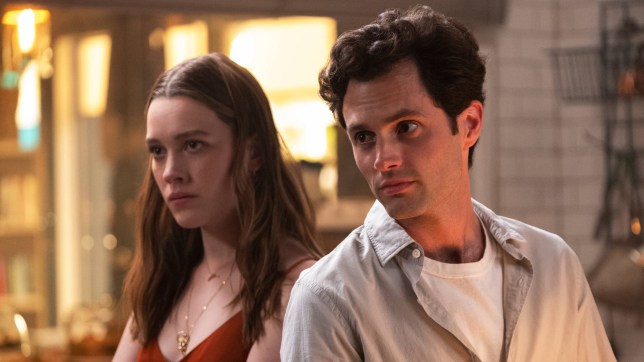 The series has wrapped and new episodes are on the way (Picture: Netflix)

The third season of Netflix series You is closer than ever, after the streaming service confirmed that filming on upcoming episodes had wrapped.

Netflix confirmed the news on Instagram with a picture of serial killer Joe Goldberg (Penn Badgley) sitting on set in a chair with the word ‘stalker’ written on it.

‘Don’t worry we have eyes on Joe at all times. happy S3 wrap,’ the picture caption read.

Netflix last dropped new episodes on Boxing Day 2019 and fans have been waiting patiently since then.

The second season focused on Joe and Love Quinn (Victoria Pedretti) who relocate to suburbia and have a baby together.

However, according to Penn, their happiness can’t last long.

The actor, who once said it’s ‘shockingly simple’ to play the killer, told TV Line: ‘Even Joe says, pretty unequivocally, that they’re not soulmates. He’s afraid of her in the end.

‘Basically it’s a set up for season three in a way where they would be each other’s arch nemeses.’

Netflix confirmed You had gone into production back in November.

The announcement came via the show’s official Twitter and was accompanied by a picture of creepy character Joe wearing a mask, with a cheeky coronavirus caption which read: ‘We recommend you stay at least 6 feet from Joe Goldberg at all times. YOU S3 is back in production.’

Meanwhile, joining Penn and Victoria this season will be Animal Kingdom’s Scott Speedman as a mysterious millionaire, Travis Van Winkle as an enigmatic supplement company boss Cary, and Shalita Grant as a two-faced Momfluencer.

A release date has yet to be announced for the new series.

You seasons two and three are available to watch on Netflix.