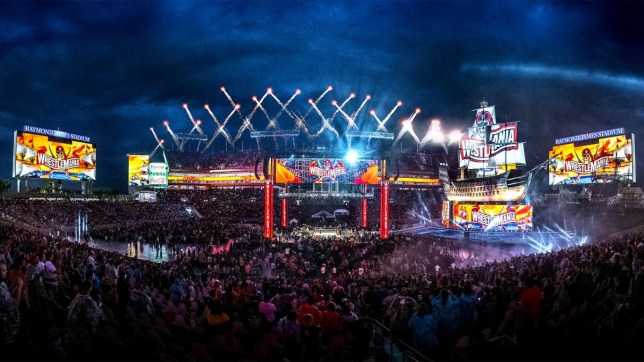 Raymond James Stadium was a sight to behold (Photo: WWE)

WWE excelled in extraordinary circumstances on Saturday with the first night of WrestleMania 37 at Raymond James Stadium as Tampa weather caused a heavy delay.

The event got underway around 40 minutes late with superstars having to improvise backstage promos to keep fans at home entertained as they made sure it was safe to continue.

Eventually, they did get underway, and while bad weather is continued to affect the area in Florida, there is no indication the show will be cancelled.

Tampa has been hit by heavy thunderstorms throughout the day, with some fans online reporting power outages in nearby hotels.

Indeed, some local attractions have also been forced to close today due to the weather.

And Tampa Bay Downs – which notes itself as the ‘only Thoroughbred race track’ in West Florida – wrote: ‘Today’s entire card has been cancelled due to adverse weather. Thoroughbred racing will return Wednesday with a first-race post time of 12:15 p.m. Be careful and be kind and we look forward to seeing everyone soon!’

According to The Weather Channel, thunderstorms are expected to continue until around 6pm EST – that’s 11pm in the UK – before some scattered storms three hours later and conditions look to improve.

It should be noted, the severe thunderstorm warning is currently in place until 4pm.

The second night of WrestleMania 37 is set to get underway at 1am BST, and Fightful Select reports that while this isn’t expected to change at the moment, talent’s call time has been delayed.

Saturday’s event was headline by an historic bout between Sasha Banks and Bianca Belair, as the latter won a fantastic match to claim the SmackDown Women’s Championship.

Tonight, the show will close with Roman Reigns putting his Universal Title on the line against Daniel Bryan and Edge in a highly anticipated Triple Threat.

Other blockbuster matches on tap include Asuka vs. Rhea Ripley for the Raw Women’s Championship, a Nigerian Drum Match between Apollo Crews and Big E for the latter’s Intercontinental Title, and Randy Orton battling ‘The Fiend’ Bray Wyatt.