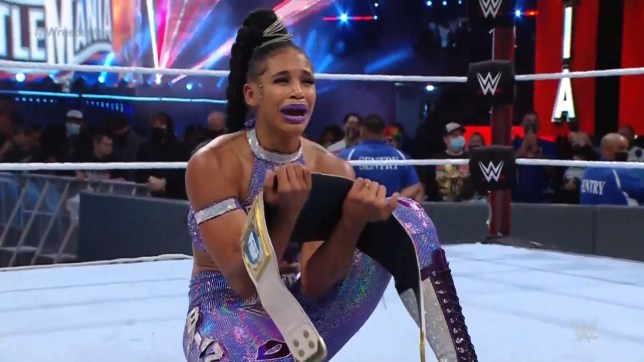 The EST of WWE won the big one (Photo: WWE)

Bianca Belair made history at WrestleMania 37 as she beat Sasha Banks in WWE’s first ever main event between two black performers at the annual extravaganza.

The two women had the world watching an historic match and the EST of WWE was visibly overcome with emotion as they soaked in the adoration of a live crowd.

It was the first time the performers had been in front of a live crowd in over a year, with Banks and Belair getting the huge honour of closing the first night of the double header at Raymond James Stadium.

The Legit Boss is highly regarded as one of the best performers of her – or indeed any – generation, and rising star Bianca has fans so excited for the future.

Thankfully, we don’t have to wait as she captured the SmackDown Women’s Championship on the grandest stage in a match that perfectly showed why everyone thinks so highly of her.

Banks deserves credit too for her role in the bout, which was absolute deserving of top billing.

Belair looked so strong throughout, including a brilliant moment where she carried her opponent back into the ring up the steel steps.

In a particularly brutal moment, she also whipped Sasha with her long hair, which left a nasty cut on her midsection.

In the end, it was the K.O.D. which secured the win, with Belair’s dad almost falling over the barrier as her family celebrated a memorable moment.

Vince McMahon opened the show with the roster flanking him on the stage, before Bebe Rexha sang America the Beautiful.

After a long delay due to bad weather, co-hosts Titus O’Neil and Hulk Hogan – the latter getting booed by sections of the crowd – welcomed everyone to the show, before Drew McIntyre was the first superstar to make his way out for a match in front of actual fans in over a year.

He fell to WWE Champion Bobby Lashley’s Hurt Lock, but the two monsters put on a belting battle to welcome the WWE Universe back in a big way – fantastic stuff.

The Tag Team Turmoil was up next, with Billie Kay and Carmella eliminating Naomi and Lana, before the Riott Squad took them out of the running.

They kept on rolling by beating Dana Brooke and Mandy Rose – who unfortunately slipped on her way down the wet ramp – and then had to face veterans Natalya and Tamina.

Things picked up a notch from there after what had been a shaky match up to that point, with Tamina and Natalya getting a big win to earn a Women’s Tag Team Title shot against Shayna Baszler and Nia Jax tomorrow night.

Up next was an early contender for match of the weekend, as Cesaro earned a career-defining win against Seth Rollins in the former’s first ever WrestleMania singles contest.

The crowd were fully behind the Swiss Cyborg in a bout that far exceeded even the loftiest expectations everyone already had, and it was a genuinely heartwarming moment to see him pin the Messiah in the middle of the ring.

Up next, Omos finally made his in-ring debut and looked great as he and AJ Styles won the Raw Tag Team Titles from The New Day. 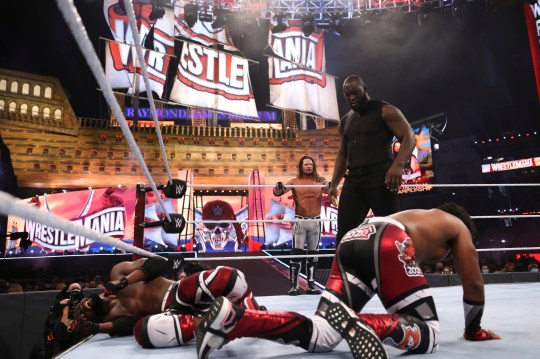 Omos and AJ Styles won the gold from The New Day (Photo: WWE)

Xavier Woods and Kofi Kingston actually seemed to work as heels for much of the match, and the reaction from the crowd when the giant was finally tagged into the match showed WWE has been wise to take things slow introducing him as an in-ring star.

The Steel Cage Match between Shane McMahon and Braun Strowman didn’t have a great build at all, but there shouldn’t have been much doubt that they’d deliver on the grandest stage.

This was a tonne of fun, with the Monster Among Men getting revenge on his rich kid tormentor, and a definite WrestleMania moment as he ripped the cage apart to drag Shane O’Mac back in.

Up next, it was Bad Bunny’s time to shine as the Grammy-Award winning musician blew everyone away and showed talent far beyond his few months training.

Teaming with Damian Priest, the crossover star excelled any expectations for a celebrity wrestling match as he delivered some advanced moves and looked totally at home opposite The Miz and John Morrison.

In the end, he picked up the big win for his team – and hopefully it’s not the last we’ve seen of him in the ring.

WrestleMania 37 night one results and grades