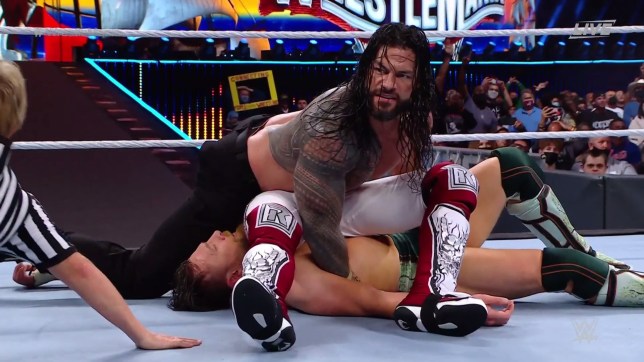 The Tribal Chief is still your Universal Champion (Photo: WWE)

Roman Reigns cemented his spot at the head of the WWE table as he retained his Universal Championship in a fantastic WrestleMania 37 main event.

The Tribal Chief needed his cousin Jey Uso to secure the win, but he looked every inch the beast he’s been for the past eight months against Daniel Bryan and 2021 Royal Rumble winner Edge.

All three men played their part to perfection here, with Uso and Paul Heyman adding to the action without detracting from the beautiful story unfolding at Raymond James Stadium.

Fans booed Reigns as he made his way out with his cousin and special counsel on either side, and it seems WWE is finally hitting the right notes with his villainous persona.

The match had a frantic pace without after appearing rushed, and the trio of superstars deserve full credit for their work in an intense and violent clash of titans.

The crowd was behind Bryan and Edge throughout, and one brilliant moment saw them both with Roman in a Yes Lock and Crossface respectively, before it descended into headbutts as they tried to get the upper hand.

Edge showed more than a flash of the old Rated R Superstar here, which had been evident in recent weeks and will add plenty of depth to his run now that the honeymoon period of the comeback is over.

Thankfully on this evidence, he clearly has plenty to offer as a main event performer in 2021, which is incredible at this point in his career.

On that note, it has to be said that there was an emotional tinge to this match with all three men previously stepping away from wrestling with no guarantee they’d do it again.

Indeed, while Roman returned in February 2019 after his leukaemia went into remission, both Edge and Bryan had been told by doctors they would never wrestle again due to respective injuries.

So it was poetic, then, that all three men who overcame so much then did battle in the first WWE show in front of fans in over a year.

The bout came to an end when Edge laid out Bryan with a conchairto, only for Uso to interfere once again and divert his attention, with Edge turned into a Spear from Roman Reigns.

The Universal Champion laid out the Rated R Superstar with a conchairto of his own, and threw his body over Bryan’s so he could definitively pin both men and cement his spot at the top of the card.

The second night opened with Titus O’Neil and Hulk Hogan coming out dressed as pirates, with the latter met with boos every time he spoke.

Randy Orton came out first before The Fiend made an entrance straight out of a horror film, complete with him walking through fire to be reborn, and coming out a giant jack in the box.

The match itself was slow but methodical, with Bray Wyatt nicely paying tribute to the late Brodie Lee a few times before a baffling ending as Alexa Bliss distracted him, black blood pouring over her face. 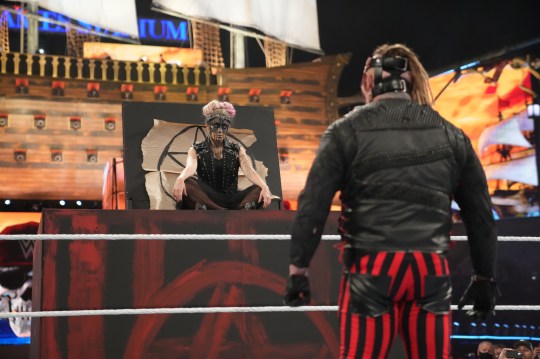 Bliss turned on The Fiend – but why?! (Photo: WWE)

That was enough for Orton to sneak in the RKO for the win, and a stare-down between The Fiend and Bliss ended as the likes dropped out and everything vanished.

Up next, the Women’s Tag Team Titles were on the line as Nia Jax and Shayna Baszler retained the gold over veterans Natalya and Tamina.

They put on a really fun match with the live crowd fully behind the challengers, but it wasn’t to be as the champions kept on rolling.

Kevin Owens and Sami Zayn delivered on the grandest stage in the latest chapter of their long-running rivalry with what was the best match for the night at this point.

Logan Paul was kept largely out of the way bell to bell, but he did take a huge stunner from KO after switching allegiances and abandoning Zayn after the bell.

Sheamus and Riddle delivered as hard hitting a match as you’d expect, with both going all out for the United States Title.

The former champ looked livid as he ended the match with blood pouring from his mouth after the Celtic Warrior caught him with a huge Brogue Kick as he hit a lionsault off the middle rope.

The Nigerian Drum Match between Big E and Apollo Crews was utterly brutal, although the stipulation didn’t come into play too much with a lot of drums surrounding the ring without really being used.

That said, both men delivered here in a fine No DQ match, with the ending providing a nice shock as Dabba-Kato – AKA Babatunde Aiyegbusi – helped Crews captured the Intercontinental Championship.

In the penultimate match, Rhea Ripley – who had her entrance performed live and looked every inch the star she is – beat Asuka to capture the Raw Women’s Title.

The crowd didn’t seem as into the match as perhaps they should have been, but that didn’t dampen the Nightmare’s crowning glory.

Before the main event, Bayley came out to interrupt hosts Hulk Hogan and Titus O’Neil, only to be interrupted in turn by the Bella Twins, who beat her up to boos from a crowd perhaps expecting Becky Lynch instead.