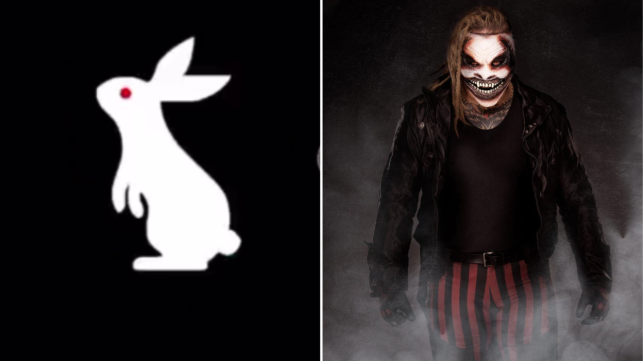 The mystery of the White Rabbit continued to play out on SmackDown last night as WWE keeps fans guessing.

With speculation mounting that Bray Wyatt could be make a sensational return to the company over a year after he was shockingly released, WWE has teased fans over the past couple of weeks with cryptic clues.

Friday night was no different, with yet another QR code, this time leading to a video of Disney’s Three Little Pigs animated from 1933.

The cartoon – which was interspersed with images of butchered pigs – included a Morse code message which spelled out ‘AZAZEL REBORN’.

Another clue hidden this week was a white rabbit graphic featuring the message TS_S10E6, brilliantly referencing to an episode of The Simpsons which features Jefferson Airplane’s song White Rabbit.

A phone number was included, with a reversed and slowed-down message spelling out Belair – when played in reverse, it says: ‘Bravo. Echo. Lima. Alpha. India. Romero. I am the way into the City of Woe. I am the way into eternal sorrow.’

Although the Belair reference is less clear, the rest of the message comes from Inferno by Dante Alighier, which continues: ‘Justice caused my high architect to move, divine omnipotence created me, the highest wisdom, and the primal love.

‘Before me there were no created things, but those that last forever—as do I. Abandon all hope you who enter here.’

The latter third – particularly those last seven words – does connect to Bray, who had the same phrase on the wall of the Firefly Fun House.

As well as the number 1911 (which appeared on Wyatt’s hat when he dressed up as the Mad Hatter) featuring in the URL for the video, there was another a direct nod to the star elsewhere on SmackDown.

At one point, someone held up a sign behind commentators Corey Graves and Michael Cole, which read: ‘Revel in what you are’.

Plenty of fans picked up on this and pointed out that Bray himself tweeted the same line almost three years ago.