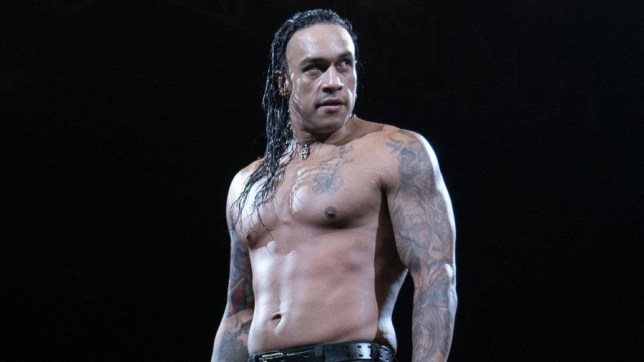 The Archer of Infamy had a run-in with the Dead Man (Photo: WWE)

The Undertaker and Damian Priest is a dream match WWE fans may never get to see – but it almost happened at the Performance Centre.

The Raw superstar – who has recently been seen paired with Grammy Award winning musician Bad Bunny since being called up from NXT – has recalled working with the legendary Dead Man at the company’s Orlando training facility.

Appearing on Metal Injection’s Squared Circle Pit podcast, Priest recalled them sparring in the ring during one of Taker’s trips to the PC to help the younger talent.

He said: ‘What wasn’t on it [the footage of Undertaker being at the Performance Center], we actually got to get in the ring a little bit with Undertaker, and man he put on the gloves and everything.

‘I was like, “Oh no, he’s gonna beat us up,” and then I actually got to lock [up], throw some blows with him and I remember he was showing somebody something and he threw a punch and he was just explaining something so he wasn’t actually trying to hit me.

‘ But he threw it full speed and it touched my face and he pulled back, I mean just before he broke my nose and I was like — and I looked around and I was like, “Man! That was awesome, do it again.” So cool… The fan in me couldn’t help it.’

Meanwhile, the former North American Champion has been impressing WWE fans who witnessed his NXT run over the past year or so, but it turns out he could’ve been on the scene even earlier.

He explained: ‘I had a tryout with WWE in 2014 I believe, and at the time, they liked me. They all said, “You’re a yes for the company,” that, “You’re the type of guy we’d wanna hire but there’s just nothing for you right now” and then I said, “Oh okay.”

And then I spoke to one of the scouts and coaches and he was like, “Go make a bigger name for yourself.” He goes, “And make yourself undeniable to the company.” I said “OK”, and that’s what I did.

‘I started making a bigger name for myself and then I kinda contacted the company a year after that, and again, it was just like, “Nothing for you now” and then I kind of wrote it off as far as, “I’ll probably never work there but it’s OK. I’m OK with that and I’m not gonna stop working as hard as I am.” ‘

Priest – whose dad once defeated Chuck Norris in an exhibition fight – decided to focus on enjoying his career on the independent scene, and then in 2018 it all came together.

‘I was working for Ring of Honor at the time, my contract was up and they called me at literally a perfect time and they were like, “Hey, are you under contract?” And I was like, “Yeah, until the end of the month.” They’re like, “This month?”

Cristiano Ronaldo’s dreadful Juventus free-kick record defended by No3 keeper who says ‘in training, they all go in’