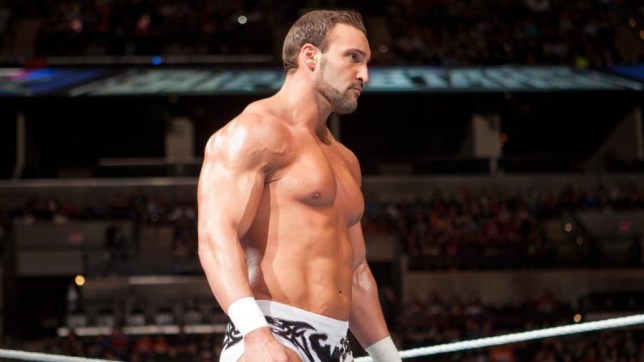 The Masterpiece will be a perfect fit for NWA (Photo: WWE)

Former WWE superstar Chris Masters is set to make his National Wrestling Alliance (NWA) debut at Back For The Attack and it’s a chance to prove his critics wrong.

The 38-year-old veteran – now working under the name Chris Adonis – first made his Monday Night Raw debut as the Masterpiece a few weeks after his 22nd birthday in February 2005, with an enviable physique and old school style built around his signature Masterlock Challenge.

Despite the growth the ripped star – who was initially released by WWE in 2007 before returning for another two-year spell in 2009 – has shown in the ring over the past decade or more on the independent circuit both in the US and here in the UK, a lot of fans are yet to really see what he can do.

Explaining his development as a performer, he exclusively told Metro.co.uk: ‘I was sick and tired of all the criticism in terms of just being a “body guy” who couldn’t work, and Lex Luger comparisons – nothing against Lex Luger, by the way.

‘But I was tired of that. And being a lifelong fan and somebody who grew up loving Bret Hart, Curt Hennig, Shawn Michaels, all those really great workers – I started on the Warrior but then those guys really caught my eye.

‘So, I didn’t wanna be known as a guy who couldn’t be that type of worker in the ring. So it made me eventually really start analysing my matches, picking them apart and seeing what I can do better and I just started understanding things better.’

For Adonis, this meant really leaning into the art of storytelling – which was a big part of his early days as the Masterpiece as WWE looked to ‘recondition’ its audience to appreciate the ‘simple things’.

‘They wanted to put credibility behind simple things like that, a Full Nelson, rather than guys having to go to the absolute extreme for finishes or even for high spots,’ he explained.

‘A lot of guys got hurt, and they were learning from that and they just kinda realised they needed to recondition the fans again and make stuff like that mean what they should, essentially. Because they are effective!

‘If you put somebody in a Full Nelson, it’s legit. I used to do that before I even got into wrestling, as a bouncer.’

In the early years of his career, Chris admitted despite being featured in prominent spots on worldwide television, he still had ‘a long way to go’.

‘It’s taken a long time. You would think being a lifelong fan that you would just pick it up that must quicker than everybody else. And I got it from the get go, but I didn’t “get it” get it.

‘I still had to develop a lot of little things, like perfect my selling, my offence, physicality, intensity, all that stuff.’

He’s certainly done that, as many fans who watched his memorable battles with the late Kris Travis in Preston City Wrestling – bouts the Masterpiece still regards as among the best of his career – will confirm.

On Sunday night at NWA Back For The Attack, he’ll be battling fellow WWE alumni Trevor Murdoch – a former tag team champion in Vince McMahon’s company – and given their crossover, it’s surprising that this will be their first ever meeting outside of Battle Royals.

‘This is a guy I’ve known forever, we were the WWE at the same time. He’s a physical guy, he’s old school by nature but he’s still good even in this day and age,’ Chris said, noting his excitement for what is sure to be a hard hitting bout.

‘When I saw the announcement that I was working him, there’s not many guys I would – he would be near the top of guys I’d wanna get in there with. I think we can have a good match.’

Fans will be delighted to see Adonis back on a major platform, with NWA also bringing back its weekly Powerrr programme, which is a major call back to a timeless era of wrestling.

‘NWA is definitely a great platform, they’ve created a lot of buzz. I love what they’ve done – I’m a fan of the old school architect of wrestling,’ he said.

‘Even when I watch to this day, when I’m bored, I’ll be going back into even before the Attitude Era – the Golden Era, the New Generation Era, then the Attitude [Era] and the Monday Night Wars.

‘I love all that stuff, and it’s gonna be fun. I like what they’ve got going on, and I’m really excited to take part in it.’

*Chris Adonis debuts at NWA: Back For The Attack tonight at 8pm. Tune in on pay-per-view via FITE TV or Virgin Media.