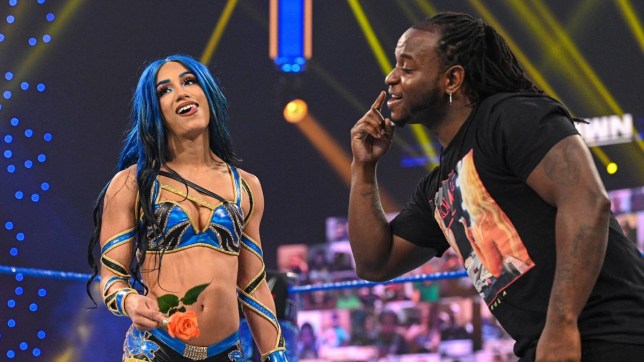 WWE superstar Reginald had a rough night on SmackDown as he got fired midway through the show.

The former Cirque to Soleil performer has appeared on screen since late last year as Carmella’s personal sommelier, but their on-screen partnership ended on Friday night.

After his attention seemed to be swayed by Sasha Banks in recent weeks, Carmella was unimpressed and cut ties with Reginald during a backstage segment.

The Legit Boss was also annoyed after his interference at ringside during Bianca Belair’s match with Shayna Baszler – although thankfully he didn’t stop the EST of WWE from winning.

Poor Reggie was gutted after Carmella kicked him to the curb, and he later went to try and talk to Banks but she responded with a definitive ‘no’ – and slammed the door right in his face.

Baszler appeared on cue as she mocked and threatened him, but her fellow tag team champ Nia Jax calmed her down and admitted Reginald is actually ‘kinda cute’.

Before wrestling, Reggie shone on the grand stage of Cirque du Soleil, where he appeared as an acrobat specialising in hoop diving.

This clearly caught the eye of WWE bosses, who signed him up around this time last year in the January 2020 Performance Center class, where he has been adjusting to his new environment.

He was given the ring name Akeem Young after signing with NXT, but fans had to wait until his SmackDown appearances at the end of last year – and his first WWE match – to really see what he’s about.

Meanwhile, he had previously posted a training video to show how he was developing after just seven months training as a wrestler, with many stars on the black and gold brand having years on the clock on the independent scene.

He teased at the time: ‘The start of something new, something legendary, something that you haven’t seen before, the future of this business.’

After last night, there aren’t many who’d bet against him.