Roman and The Usos decimated the New Day (Picture: WWE)

Roman Reigns and The Bloodline destroyed The New Day to end WWE SmackDown on a high.

The Universal Champion stood tall alongside Jimmy and Jey Usos as the tag team champions joined their cousin to make an example of King Xavier Woods and Sir Kofi Kingston.

The night kicked off with Reigns coming down to the ring with Jimmy, Jey and Paul Heyman as he admitted he took last week off to celebrate his win over Brock Lesnar at Crown Jewel.

After demanding the acknowledgement of the crowd, he pointed to last week as an example of his greatness, claiming everyone had a bad week without him there.

He specifically pointed to The Usos losing to The New Day in the main event, and urged Jimmy – who took the fall last week – to make amends, which led to Xavier and Kofi interrupting.

They mocked the Head of the Table and the Island of Relevancy, laying down a challenge where Jimmy losing would see The Bloodline bending the knee, and a Woods loss would mean he’s acknoweldge the Tribal Chief.

The main event, which was a fantastic way to end the night, saw Woods and Jimmy put on cracking match as the former scored a roll-up win.

The Usos almost knelt before the king, but Reigns attacked Xavier with a Superman Punch, which led to an intense three-on-two beatdown.

Eventually, the Bloodline stood tall as the show came to an end, and this could be a masterful bit of build towards Reigns and Big E at Survivor Series.

Sonya Deville continued to antagonise Naomi, who faced Shayna Baszler in a rematch from last week.

She looked fired up, putting up a fight as she escaped the Karifuda Clutch and rolled up the Queen of Spades – but all was not as it seemed.

Deville pointed to Naomi grabbing the rope and insisted it should have been a break, thus ruling that the match should restart, which led to Baszler quickly locking in the move for a submission victory. 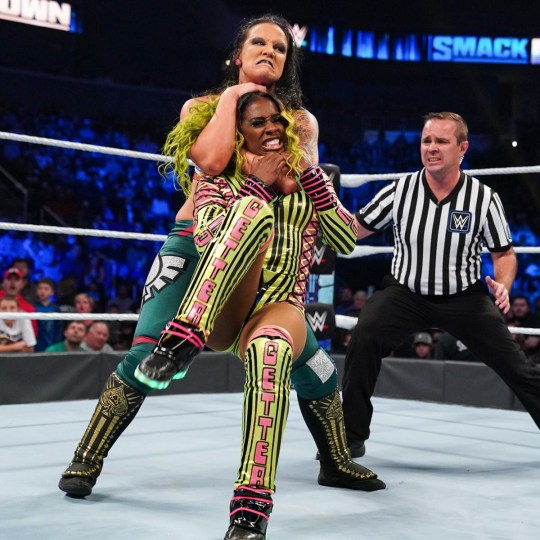 The Queen of Spades made an example of out Naomi (Picture: WWE)

Shotzi spoke backstage as she pointed to her missing title shots and the loss of tag team partner Tegan Nox, the fans and her loss to Charlotte Flair – which she blamed on Sasha Banks.

She vowed to run over anyone in her way, and claimed she doesn’t need her trusty tank to do so.

Up next, Cesaro and Mansoor teamed up against Los Lotharios – the newly-named team of real life cousins Angel Garza and Humberto Carrillo. 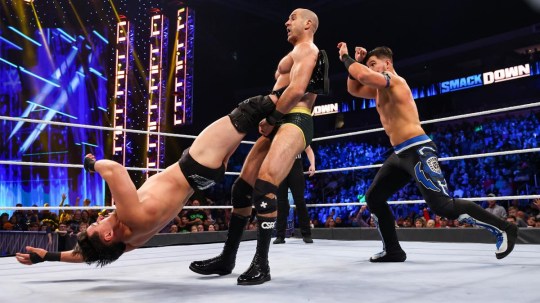 Los Lotharios proved too much for Cesaro and Mansoor (Picture: WWE)

Of course, the Swiss Superman deserves much better than being an afterthought, but this as a great tag team bout, and it makes sense of the heels to win after some miscommunication between Cesaro and Mansoor.

Drew McIntyre continued to build momentum with another open challenge, this time answered by Ricochet as the two stars put on a fun showing.

The One and Only showed some fire, but in the end he won with an incredible closing sequence as he hit a Claymore mid-moonsault for the victory. 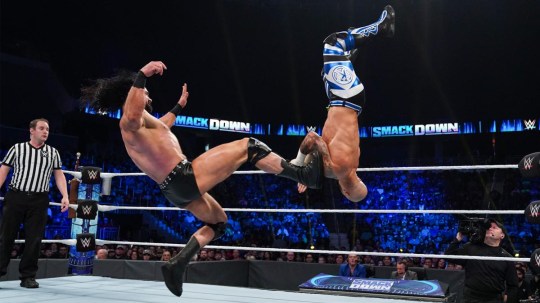 McIntyre and Ricochet put on a fantastic sprint (Picture: WWE)

Backstage, Mustafa Ali has pointed to the common ground between him and Ricochet, but the latter rejected the offer to team up, pointing to the way his partnership with Mansoor disintegrated.

The pair had a great Main Event feud, so seeing that on a bigger stage would be a welcome addition to SmackDown.

Happy Talk with Happy Corbin and Madcap Moss saw The Viking Raiders make an appearance, as Erik and Ivar had their say and led to a match with the cheery duo.

It was a lot of fun, even with a disappointing ending as Corbin and Moss took a Count Out loss where a pinfall would have meant much more.

We also saw some friction between Hit Row – minus B-Fab after her shock release this week – and Sami Zayn, who showed the trio how to make an entrance.

Isaiah ‘Swerve’ Scott, Top Dollah and Ashante ‘Thee’ Adonis teased a union before they turned on him with a verbal put-down.

*WWE SmackDown airs on Friday nights at 1am on BT Sport 1.