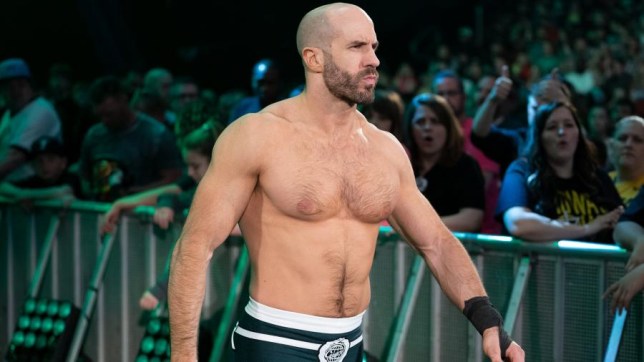 SmackDown opened in style as Universal Champion Roman Reigns came out flanked by Jey Uso and Paul Heyman to start the show.

The WWE star did what he promised he’d do at WrestleMania 37 when he stacked and pinned both Edge and Daniel Bryan in the main event to reclaimed his title.

Heyman took over to hype up that accomplishment, before the Tribal Chief insisted no one wanted to fame him and he’d fulfilled his contractual obligations by stepping out to start the show.

However, Cesaro – fresh off a huge win over Seth Rollins in his first ever singles match at Mania – did step up, only for the trio to disrespect him by immediately leaving the ring before he could speak.

Backstage, the Swiss Cyborg bumped into Adam Pearce and Sonya Deville, and demanded a match with Roman in the main event – with the latter saying she’d speak to the champ and see what he thought.

Later on, Heyman was seen speaking to Kayla Braxton as he tore down Cesaro before insisting he’d give him what he wants – but it turned out to be a ruse as he revealed he will actually face Jey Uso at the end of the night.

Cesaro – who was repeatedly highlighted throughout the night with footage of his epic UFO on Rollins from Mania – responded in short but sweet fashion and promised to prove he belongs in the rings with Roman.

Moments before the main event, Jey Uso branded his opponent a ‘one move wonder’ and looked ready to take care of business for his cousin.

The main event itself was as fantastic as you’d expect, with both men making the most of the time they were given and putting on a brilliant show.

Unfortunately, the ending – which came without Cesaro actually hitting the UFO despite WWE hyping the move all night – soured things somewhat.

Rather than the Swiss star being focused on Roman Reigns, it seems his issues with Rollins aren’t done just yet as the SmackDown Saviour attacked his rival, causing the disqualification as the show reached its conclusion.

The first match of the night – a special mention to new commentator Pat McAfee here, for his work alongside Michael Cole throughout the whole show – highlighted the tag division as Otis and Rey Mysterio battled with Chad Gable and Dominik at ringside for their respective partners.

The duo worked well together in a clash that was sadly all too brief, with Rey sneaking the win with a crucifix pin in a bout that could’ve done with another five minutes.

Following on from Sami Zayn’s loss at WrestleMania, he was still ranting and raving about the conspiracy and insisted the distraction of Logan Paul at ringside was the only reason he didn’t win.

He called out Kevin Owens for a rematch, which was accepted – and there was no way these two were every going to deliver anything other than top-notch storytelling.

They had time to do just that, and in the end Zayn lost again via countout, only for KO to drag him back to the ring to hit and Stunner to make a statement to the locker room.

In a feel good moment, the Street Profits’ Angelo Dawkins and Montez Ford hosted a championship celebration for the latter’s wife Bianca Belair after her historic win over Sasha Banks at WrestleMania.

Surprisingly, there was no interruption as the trio shared a sweet few minutes together and the EST of WWE urged the duo to pick up the SmackDown Tag Team Titles later in the night.

Backstage, Sasha Banks looked fuming, and Bayley spoke to Kayla to run down Belair while putting the new champ in her sights.

The tag title bout delivered in a big way, with both teams going all out and treating fans to a top-level clash which saw the Dirty Dawgs steal a win to retain the gold.

Over in the women’s tag division, Natalya battled Shayna Baszler in a very short match after she and Tamina came up short on the second night of WrestleMania.

The live crowd got massively behind the challengers that night, and an accidental distraction from Nia meant Natalya was able to sneak a win to surely set up a rematch as they stood tall.

Elsewhere on the show, new Intercontinental Champion Apollo Crews introduced the world to his new bodyguard Commander Azeez and hyped up his finisher the Nigerian Nail (the Samoan Spike to fans for Umaga).