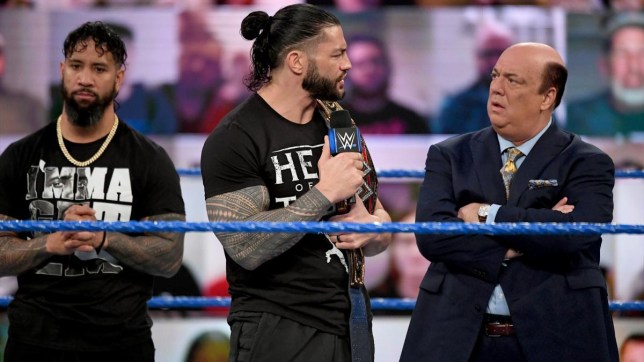 Will the Rated R Superstar move for the Island of Relevancy? (Photo: WWE)

WWE SmackDown put a big focus on the Universal Championship, and a potential decision from Royal Rumble winners Edge and Bianca Belair.

Right at the top of the show, Roman Reigns came out with Paul Heyman and Jey Uso by his side and insisted the Rated R Superstar was wasting his time considering challenging Drew McIntyre or Finn Balor for the WWE or NXT Titles.

Instead, he should be begging to be allowed onto the Island ot Relevancy.

However, Heyman relayed a message from production and confirms Edge hadn’t arrived at the ThunderDome yet, which angered the Tribal Chief.

He questioned whether his potential challenger sees him as a fool before using Kevin Owens as an example of what happens when you disrespect the champ.

He insisted Edge will have to give him a decision before the end of the night, and described this as his ‘only chance’.

During the night, Hulk Hogan made a return to celebrate 33 years since the most watched wrestling match in history as he faced Andre The Giant on Main Event.

He used his time wisely in fairness, hyping up Edge and referencing their time as tag team champions before backing his former partner to win the gold at ‘Mania.

Later in the evening, Edge came out for the main event segment and discussed his own journey over the past seven months to get back to full fitness, with the Rumble and now look ahead to a WrestleMania main event.

He pointed to the fact he never actually lost the World Heavyweight Title, before noting he now has his pick of three top champions – although everyone has given different advice regarding his choice. 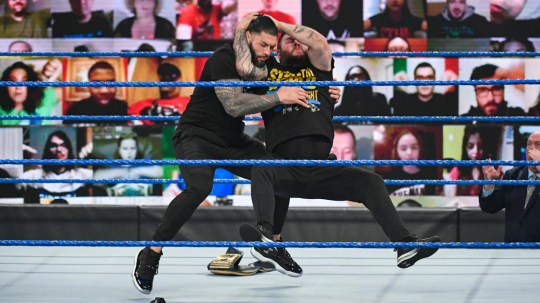 Reigns interrupted and came down with Heyman and Uso, although Edge immediately questioned his need for back-up which was played down brilliantly by the Tribal Chief.

He ordered Uso to leave, and then urged Edge to acknowledge him as the main event of WrestleMania and his choice of champion.

Instead of him making his decision tonight though, Kevin Owens appeared out of nowhere and hit a Stunner on Roman – so it seems they’ve got one more match in them even after their brutal Last Man Standing fight.

King Corbin continued his issues with the Mysterio family, attacking Dominik and Rey during their entrance and lobbing the latter off the ramp before the bell.

The match itself was strong, although Dominik picking up the win after his dad helped him cheat was a questionable result meaning this feud will keep on rolling.

Cesaro made Daniel Bryan submit to the sharpshooter in a typically fantastic clash, before the pair shared a fist bump as a mark of respect after the bell.

Elsewhere, Bayley defeated Ruby Riott after another moment of botched interference from Billie Kay, who instead ended up arguing with Liv Morgan at ringside as the Role Model picked up a win.

After the match, Billie tried to switch sides and offered the winner Bayley her resume/headshot – worth a try!

Royal Rumble winner Bianca Belair was also on the show, teasing her WrestleMania 37 opponent as she discussed Asuka and Sasha Banks before getting interrupted by Reginald.

The Cirque du Sommelier insisted the EST of WWE couldn’t beat Banks or Carmella, with both women coming out in turn to hype their own chances against the rising star.

Bianca ended up whipping Reggie with her hair to send him running, and naturally no decision was actually made.

Over in the tag division, champs Dolph Ziggler and Robert Roode defeated Chad Gable and Otis in a fine non-title bout, with the use of Street Profits on commentary darting between entertaining and distracting at times.

Big E retained the Intercontinental Championship in a brilliant Triple Threat, hitting Apollo Crews with a Big Ending after Sami Zayn was left laid out in the time keeper’s area.