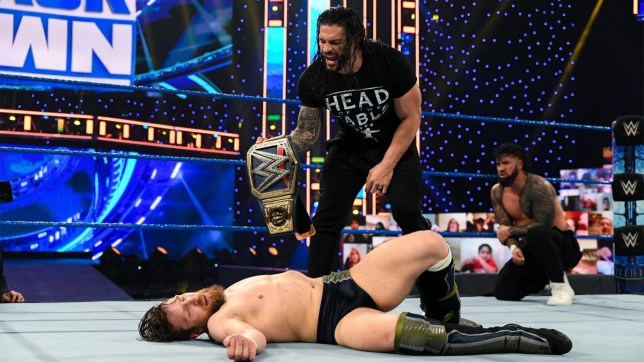 WWE SmackDown went off the air with Roman Reigns standing tall over a fallen Daniel Bryan.

The company has left things open heading into Fastlane next month, as the Universal Champion took a shot at a potential challenger.

Roman started the night with Jey Uso and Paul Heyman by his side as he insisted the blue brand needed him and claimed the same was true for Elimination Chamber as he proved he operates ‘at another level’ – but Edge stopped it from being a perfect night.

The Tribal Chief told the Rated R Superstar he doesn’t want or need a WrestleMania main event with Reigns in his life, and Reigns doesn’t want to hurt him.

However, Daniel Bryan was he one to interrupt as he suggested fans have called the Head of the Table a coward for the way he beat the leader of the Yes Movement after he already won an Elimination Chamber match.

He issued a challenge for Fastlane, which was played down by Uso, who then used a distraction from Reigns to lay Bryan out.

Backstage during the night, Edge focused on a major WWE plot hole in recent years, as he interrupted Adam Pearce and Sonya Deville and argued about Daniel getting a shot at the Universal Title before him despite losing the same Royal Rumble he won.

With seeds planted for a possible Bryan/Edge ‘Mania showdown, te main event was set where if Bryan beat Jey, he’d get Reigns for the gold at Fastlane – if not, he’d team with Edge against Roman and his cousin.

Typically, the two worked really well together until it became a wild brawl ending in a double count-out, before Reigns charged in, escaped the LeBell Lock and took out Bryan with a spear and guillotine choke.

The first match of the night saw Chad Gable and Otis double down on last weeks decimation of Rey Mysterio, as they defeated the legend and his son Dominik.

The match did exactly what it needed to do, with American Alpha in fine and relatively dominating form.

Apollo Crews showed off his new attitude as he embraced his wealthy Nigerian heritage, delivering one of the best promos of his career.

Then, he attacked Shinsuke Nakamura before their match and defeated the Japanese legend in a barnstormer of a bout. 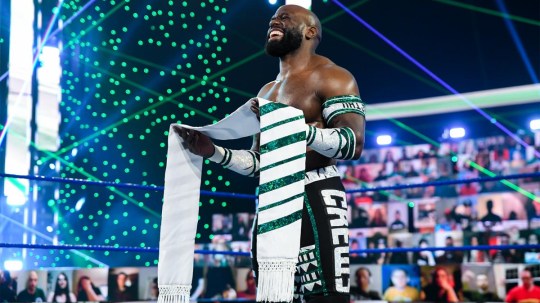 Tamina Snuka – with Natalya by her side – made easy work of poor Liv Morgan, as it seems the Riott Squad isn’t getting the push people have hoped for just yet.

Meanwhile, Bianca Belair was set to make her choice for WrestleMania 37, but Reginald hit the ring to try and sway the Royal Rumble winner’s decision.

Sasha Banks took exception to that – and Belair’s claim of being the EST of WWE, because the Legit Boss is the best.

Bianca then laid it all on the line and issued the challenge for ‘Mania, giving us a legitimately historical and exciting main event, if Reginald – no matter how great he is – stays well away as things get closer to the big show in April.

Street Profits picked up some momentum on their way back to the SmackDown Tag Team Titles as they defeated the duo of King Corbin and Sami Zayn, who couldn’t get along enough to secure a win themselves.

Finally, don’t look now but Cesaro might be in line for a featured singles match at WrestleMania 37.

The Swiss Cyborg interrupted Seth Rollins this week to halt his rant about his recent return, before the SmackDown Saviour tried to manipulate his rival and urged him to embrace the vision to really grab the brass ring in WWE.

However, Cesaro didn’t seem to want Rollins’ help, drooping him with a giant swing, leaving Seth to dizzily stagger into a beautiful European uppercut.

Come on, WWE – please don’t drop the ball on this