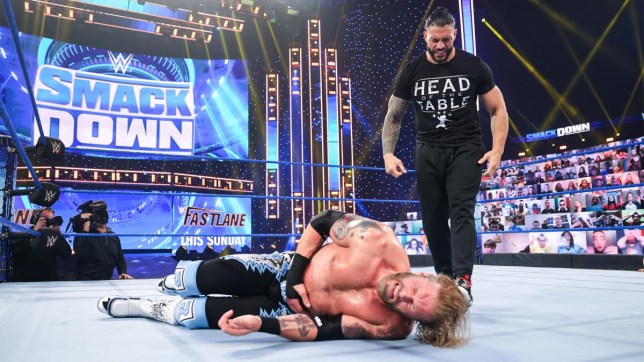 The Head of the Table stood tall (Photo: WWE)

Roman Reigns stood tall on SmackDown after taking out both Edge and Daniel Bryan just 48 hours before WWE Fastlane.

The Universal Champion has all the momentum heading into the final roadblock on the Road to WrestleMania, and last night’s show did a fine job of building to both pay-per-views.

There was plenty going on before we hit the main event pitting Edge against Jey Uso, and the Rated R Superstar put over his opponent brilliantly while insisting he needs to get out of Roman’s shadow.

He hadn’t forgotten Bryan hitting him with a running knee last week, but also insisted the Leader of the Yes Movement deserves a fair shot at Fastlane with Edge as enforcer.

Later, Bryan had his chance to respond in the ring, as he cut another brilliant promo highlight his tension with Edge before getting interrupted by the Tribal Chief and Paul Heyman.

Reigns was at his absolute best – as you’d expect from the former Shield man since his return last summer – as he took issue with his Fastlane opponent claiming he’ll make him tap out.

Roman pointed out he’s never tapped out in WWE, and he’d rather die than do so to Bryan – which the latter thought was a pretty strong claim, but he’ll still go all out to get the win.

Onto the main event between Edge – his first SmackDown match in over a decade – and Jey Uso, with the winner being the special enforcer for Bryan and Reigns’ Universal Title match on Sunday.

The match was a lot of fun with Main Event Jey getting a great spotlight with the Rated R Superstar, who hit a Spear to win the match.

However, after the bell he got distracted by Bryan which led to a Spear from Roman, before Jey attacked the challenger and pushed him into the ring to get hit by a Spear of his own.

SmackDown started with a backstage row between Sasha Banks and Bianca Belair, before the former headed to the ring to defend her Women’s Championship against Nia Jax, who had her tag team partner Shayna Baszler at ringside (although Reginald was away on a spa day).

The night went straight into the action and this title match was a fine effort from both women, with the ending coming as Baszler accidentally – or perhaps deliberately? – cost Jax the win.

The Queen of Spades would then promise to give Belair the beating of her life, which came later in the night as they faced off. 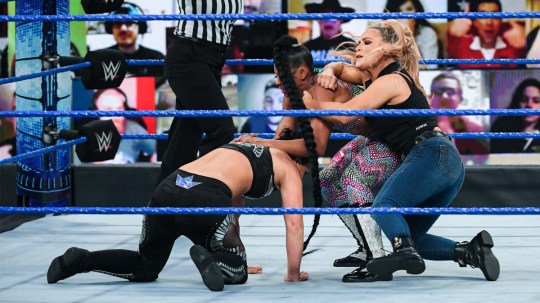 Nia left, seemingly frustrated with her partner, and the two women barely had time for a match before Natalya and Tamina staked their claim for the Women’s Tag Team Titles by taking out both stars.

Earlier on, Seth Rollins and his iconic taste in suits claimed Cesaro left him disrespected and humiliated after he turned on the Vision earlier this month, and described his sure fire WrestleMania 37 rival as an ‘abject failure’.

However, the Swiss Cyborg’s former partner Shinsuke Nakamura heard enough and told the SmackDown Saviour to shut up before leaving him on the mat with a Kinshasa, setting up what should be a great Fastlane match. 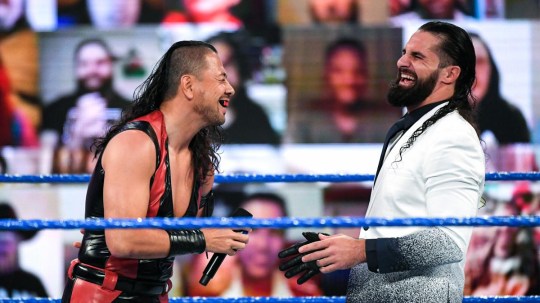 Elsewhere, the SmackDown Tag Team Title scene heated up, with Rey and Dominik Mysterio defeating the Street Profits in a face-paced match.

Chad Gable and Otis didn’t like the idea of the father and son team pushing themselves into the title picture, which led to an aggressive bout with Alpha Academy picking up a win of their own.

After Kevin Owens tried to talk some sense into Sami Zayn regarding his conspiracy documentary, the latter faced off with King Corbin in what was a fun match despite the heel vs. heel dynamic.

Corbin got the victory, but the fans were the real winners when KO once again turned down Zayn’s requests to back up his fraud allegations – which led to a Helluva Kick putting the longtime friends and rivals in line for a blockbuster ‘Mania showdown.

Finally, Michael Cole was in charge of a split screen, sit down interview with both Big E and Apollo Crews before their Intercontinental Title match on Sunday.

The IC Champ seemed furious here, warning his challenger of the pain he’ll feel this weekend, before Crews again delivered a fantastic promo in his Nigerian accent as he promised to crack his rival’s face open and take the gold.

The New Day man had heard enough, and both men went looking for each other backstage, with Big E in a gold cart.

Eventually, they clashed and started battering each other before the champ used a trash can to attack his foe, who was able to escape in the cart.

What the numbers mean for you today Saturday March 20

How can we restore our social batteries when the pandemic is over?