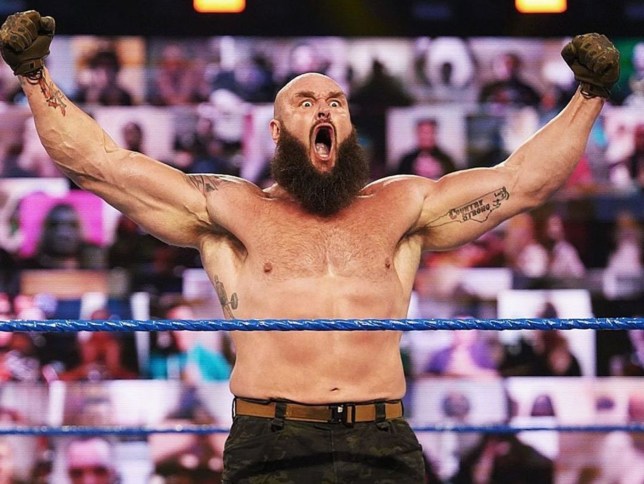 The Monster Among Men is back (Photo: BT Sport WWE)

WWE ended SmackDown on a huge bombshell and utter chaos as Braun Strowman made his return just days before the Royal Rumble.

On a night highlighted by some baffling but entertaining decisions, the show got underway with Daniel Bryan in the ring hyping up this weekend’s Royal Rumble match before he got interrupted by AJ Styles and his bodyguard Omos.

The Raw star – who was apparently appearing thanks to a quarterly brand invitational rule, because why not – also staked his claim for winning the huge 30-man bout, and laid down a challenge for tonight’s show.

Bryan suggested the Phenomenal One should come down without Omos to prove he can fight without the safety net of his massive associate, and we had ourselves a blockbuster clash confirmed.

Backstage during the show, The Miz and John Morrison – also Raw superstars – attacked Big E, and elsewhere Sami Zayn was filmed by his documentary crew as he tried to convince Shinsuke Nakamura to reunite the Artist Collective to no avail.

Later in the night, Styles and Bryan put on an absolute clinic in the ring – we’ll ignore the bizarre logic about the brands crossing over – with a match every bit as incredible as you’d think.

Eventually, Sami Zayn came down and staged a protest at ringside claiming Big E was not his Intercontinental Champion, before the New Day man stormed the ringside area, playing his coat and belt on the steps before taking out Zayn, with Cesaro – who was on commentary – also getting involved.

Bryan hit a suicide dive to the outside, which led to Sami following him back into the ring to cause a DQ, with everyone piling in as the ref called off the match.

Nakamura charged down to join, leading to a very fun six-man tag main event as he teamed with Bryan and Big E to take on Cesaro, Styles and Zayn, but Miz and Morrison interrupted that and Otis came out to almost even the odds.

When we came back from an ad break, it was 5 on 4 action, with an incredible wealth of talent in and around the ring as SmackDown threw everything at the main event leading into the Rumble.

With everyone taken out, we eventually got left with a 5 on 1 beatdown on Bryan , but Sheamus – yep, another Raw man – charged down, hopped on the apron and made the tag, eventually pinning Zayn after a Brogue Kick.

Miz, Morrison and Styles immediately jumped him after the bell, but Strowman made his surprise return from a storyline suspension and cleaned house, destroying Zayn and Cesaro with powerslams to make a statement and put the Rumble field on notice.

Best of the rest: Roman Reigns and Kevin Owens deliver

Bianca Belair and Bayley’s issues continued on SmackDown, as the Role Model had some strong words before they met in the first match of the night.

The two stars put on a really strong match without giving too much away, and the rising star picked up a huge win over a former women’s champion.

Bayley didn’t look impressed after the bell as the victor cut a great promo on the stage and explained how she wanted to win the Rumble match and go on to put the EST in WrestleMania.

King Corbin came out for his match with Dominik Mysterio, only for Rey’s son to attack him before he could make it to the ring and get a measure of revenge for his recent actions against his family.

The match itself was great, with Corbin and Dominik working well together and showing some clear chemistry – albeit with a couple of scary moments due to the latter’s inexperience – with Rey on commentary to add more to the story.

In the end, the king hit the End of Days to beat the younger Mysterio once again, although the masked luchador got a measure of revenge for his son after the bell.

Backstage, the Cirque du Sommelier Reginald tried to present Sasha Banks with a fancy bottle of fizz before the Legit Boss teased winning him over only to promise to crush Carmella’s dream at the Rumble.

As always, these men more than delivered with a heartfelt, passionate promo focused on family, adding another layer to their characters and the storyline.

The Tribal Chief brought KO’s dad into things, before claiming in a game of chess, Owens is simply a pawn who doesn’t belong in the title scene.

He said that he is a fool to think he deserves a shot, and that by extension that makes his father a fool for instilling that belief in him.

KO showed incredible fire with his retort, with the emotion hitting a new level before Roman – unimpressed with being labelled a bully – simply turned his camera off rather than listen to the end of his speech, displaying a perfect level of arrogance.