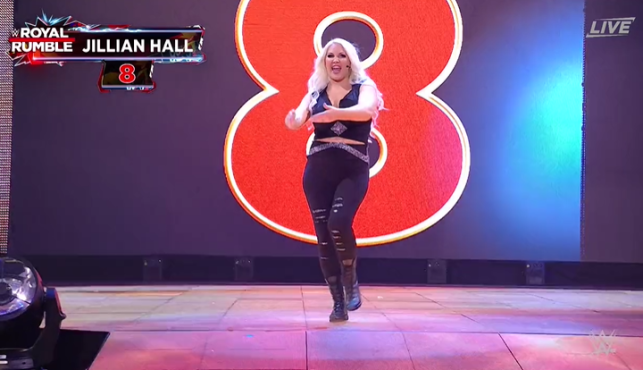 What a great move! (Photo: WWE)

WWE Royal Rumble is always a night for surprises – and Jillian Hall was one name fans didn’t expect to see.

The former Divas Champion – who hadn’t been seen in over a decade – made a shock comeback during the match, and even formed a temporary alliance with Billie Kay during the women’s Rumble.

It was a great moment for Jillian and her fans, who seemed pleased to see her on social media during the show.

She wasn’t the only unexpected return during the match, as former two time Women’s Champ Victoria made her first appearance since 2009 after being rumoured for last year’s bout, while Torrie Wilson was also featured.

Over in the men’s Rumble, there were also plenty of names from the past who showed up to the delight of fans.

Carlito was a name rumoured for the recent Legends Night edition of Monday Night Raw, but instead he made a comeback here – which honestly seemed much more meaningful than his involvement would have been at the beginning of the year.

He looked absolutely ripped as he came out, and had a strong showing until Elias threw him out.

Christian also returned a year after his best friend and former tag team partner Edge did, and fans will be hoping his strong showing means his injuries are behind him and there is one more match on the cards.

It was great to see him back, especially with the obvious emotion between the pair as they got to reunite in the ring for some memorable spots.

Speaking of reunions, Team Hell No also got back together and hugged it out one more time as Kane entered the match while Daniel Bryan was in the ring – although he was later taken out by NXT’s rising star Damien Priest.

Finally, The Hurricane also made another Rumble comeback and recreated one of his famous moments from the match as he tried to chokeslam Bobby Lashley and Big E, only for the heavyweights to throw him out.