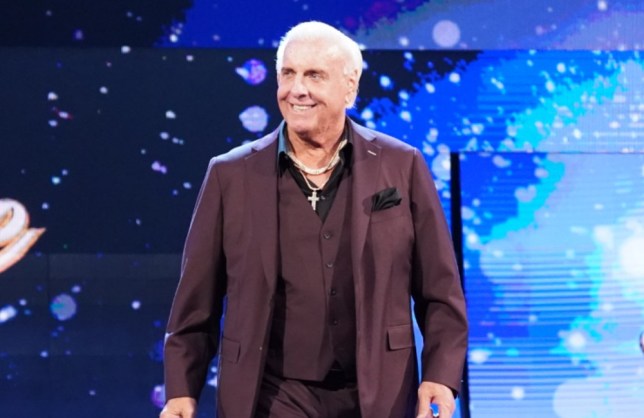 The Nature Boy will be on hand to keep control (Photo: WWE)

WWE legend Ric Flair is stepping into a very different role tonight as he referees his first ever SlapStrike battle in the build-up to the Jake Paul versus Ben Askren fight.

The Nature Boy himself will have his hands full as he officiates the exhibition bout between Da Crazy Hawaiian and The Bear Man in the newest combat sport craze.

‘Triller Fight Club announced today it will add a slap fighting exhibition match with SlapStrike, the league that has brought the new sport to the US.

‘Triller Fight Club Co-owner and Head Commentator, Snoop Dogg got hooked on the sport after watching SlapStrike’s “The War from Warsaw” tournament on FITE in March.’

Responding to the news before Saturday’s big event, Flair tweeted: ‘Hope To See Everyone At The @MBStadium Saturday Night!! WOOOOO! @triller #trillerfightclub (sic)’

Last month, the War From Warsaw captured the imagination of fans around the world, while former WWE superstar and current IMPACT Wrestling commentator Matt Striker joined Vampiro to call the action.

Discussing the appeal of slap fighting, he exclusively told Metro.co.uk at the time: ‘There are characters, there are stories, and there are elements that fans will recognise from combat sports.

‘But at the end of the day, two grown human beings stand across from one another and attempt to knock each other out with an open palmed strike to the cheek. It doesn’t get more genuine than that.’

And he noted that the new sport takes sport and entertainment to its roots.