The 35-year-old star – who is expecting her first child with AEW wrestler Jon Moxley – left the company last summer after eight years, and she has defended the long-time announcer for his work behind the desk, despite him occasionally drawing criticism from a vocal minority.

She exclusively told Metro.co.uk: ‘I still talk to Cole all the time though! Michael Cole’s the absolute best. It’s so funny, I feel like he is such an unsung hero in WWE.

‘It’s easy for people to be like, “We hate Michael Cole, bleurgh” – but he is so good at his job, and he has always been so generous to me through my career in WWE.

‘He’s always supported me too much, and really became such a great friend to me through my time there. He’s such a great dude – I can’t wait to see Cole again down the line.’

Although Renee – who joined Cole and Corey Graves on the Raw commentary team after taking on a similar role in NXT – never really felt comfortable at the announce desk, she admitted working alongside the industry veteran was eye opening. 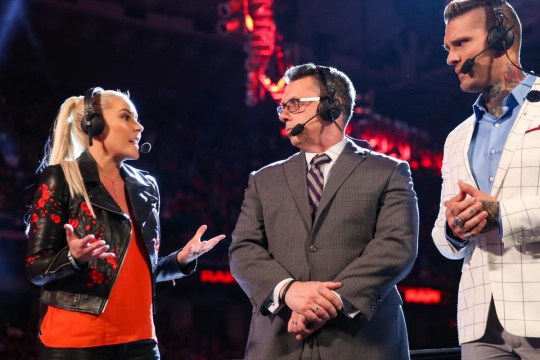 She explained: ‘When I first started getting ready to do commentary and we did the Mae Young Classic together – me, him and Beth Phoenix – that was really an insight for me, “Holy crap, he’s so good at what he does”.

‘I never really knew what I was doing when it came to commentary, but especially doing that tournament and you’re shooting over a weekend and it’s match after match after match, shows back to back – watching the way that he would function, and just keep our train on the rails.

‘But also, our monitors would not be up properly. It was a taped show, so we’re kinda reacting to things that are happening, but we didn’t have our monitors there to see playback to call the replays.

‘So, we couldn’t see the replays – and he would still call the replays as if he was watching it! I’ve never seem anything like that in my life, it was like a magician pulling something out of a hat. “What are you doing?! Are you seeing something I’m not seeing?!” He’s just so good at what he does.’

Oral Sessions podcast host Renee recalled seeing Cole – who started with WWE in as a backstage interviewer in 1997, has been behind the desk for over two decades and was named Vice President of Announcing in 2020 – work with Nigel McGuinness on the inaugural United Kingdom Championship Tournament in Blackpool back in 2017.

The duo were praised for their commentary at the event, with Cole showing a side not often seen on weekly programming, which is typically more produced.

‘I remember talking to him about that,’ Renee smiled. ‘I think that was one of the first times we were really got to hear Nigel McGuinness do commentary.

‘I was like, “Wow, Nigel’s really great!” And Cole really was able to shine in those moments.’

*Renee Paquette hosts the Oral Sessions podcast, and her cookbook Messy In The Kitchen will be released in May.

We Are FSTVL announces 2021 line-up, features Carl Cox, The Blessed Madonna and more