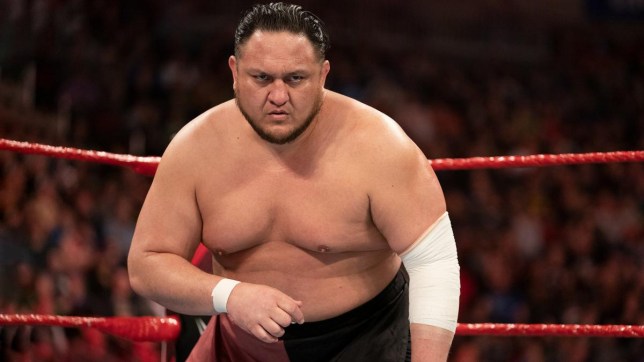 Samoa Joe is one the more surprising releases (Photo: WWE)

The company revealed a number of surprising names have been axed from its brands, with fans left baffled by some of the decisions.

In a brief statement on WWE.com, they said: ‘WWE has come to terms on the release of Samoa Joe, Billie Kay, Peyton Royce, Mickie James, Chelsea Green, Tucker, Kalisto, Bo Dallas and Wesley Blake as of today April 15, 2021.

Of the names confirmed thus far, Samoa Joe and Billie Kay both appeared at WrestleMania 37 last weekend, with the former featured on commentary.

Meanwhile, Kay – who has appeared on screen a lot lately in comedy skits handing out her resume – teamed up with Carmella in the Tag Team Turmoil match on the first night.

Many of the stars are yet to comment publicly on their releases, although veteran Mickie James thanked boss Vince McMahon for the role he’s played in her career.

‘You can never expected others vision of you to be big as your own dreams. Thank you @VinceMcMahon #AlwaysBlessedAndGrateful (sic)’

Samoa Joe got into an exchange with CM Punk on Twitter, responding to the latter’s post and saying: ‘They really should of never gave me money.’

Just days ago, WWE announced Samoa Joe and Tom Phillips had been replaced on the Raw commentary team with Byron Saxton now joined by Corey Graves and newcomer Adnan Virk.

They said at the time that Phillips is shifting his focus to hosting 205 Live and overseeing ‘special projects for WWE’s programming on Peacock’ – which presumably includes the WWE Network outside the US – as well as working at the Performance Center in Orlando.

For Samoa Joe, they had said he ‘remains part of the WWE talent roster’, which is now not the case.