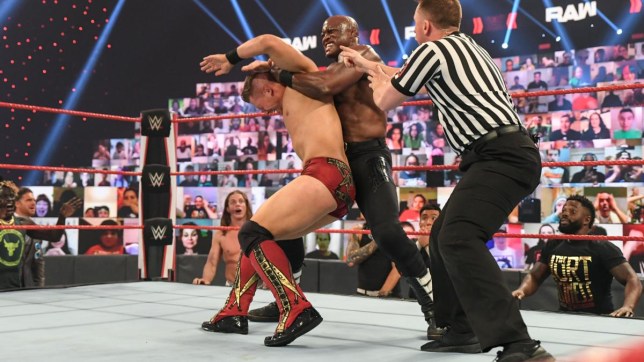 The All Mighty is the new WWE Champion (Photo: WWE)

Bobby Lashley ended a 16-year wait for the WWE Championship despite The Miz’s best efforts on Monday Night Raw.

The All Mighty helped the A-Lister win the gold by destroying Drew McIntyre after an already hellish night for the champ at Elimination Chamber, earning himself a shot at the new title holder.

On Monday, it was time to pay up, although Miz didn’t seem ready to fight as he and John Morrison came down to convince McIntyre to help him retain.

MVP came out to reveal the match would happen at the top of the hour, although when the time came he insisted he was having cramps and couldn’t possibly compete.

The match was pushed back an hour later, which he couldn’t weasel out of despite even trying to get Lashley to wait until WrestleMania 37 next month for his big moment.

However, when the bell rang Miz immediately ran away, darting out of the ring and up the ramp, retaining his title via count out.

Backstage, the champ was irate when Shane McMahon ruled he would be stripped of the gold if he didn’t face Lashley in the main event, which was later made a lumberjack match with superstars surrounding the ring.

Miz tried – and failed – to get himself disqualified, but in the end he was tossed around by the All Mighty, who finally made him submit to the Hurt Lock to win the gold.

After the bell, Lashley locked in the feared submission hold again for good measure and held the title high above his head.

After the initial drama with The Miz, Raw kicked off with its first match as Drew McIntyre battled former best friend Sheamus.

This was a match many had pinned for Fastlane or even WrestleMania, and the two rivals delivered a match worthy of the grandest stage for the television audience.

To call this an instant classic is no hyperbole, with both men working a physical and entertaining style en route to a brilliant ending as Drew interrupted Sheamus’ Brogue Kick attempt with his own Claymore for the win. 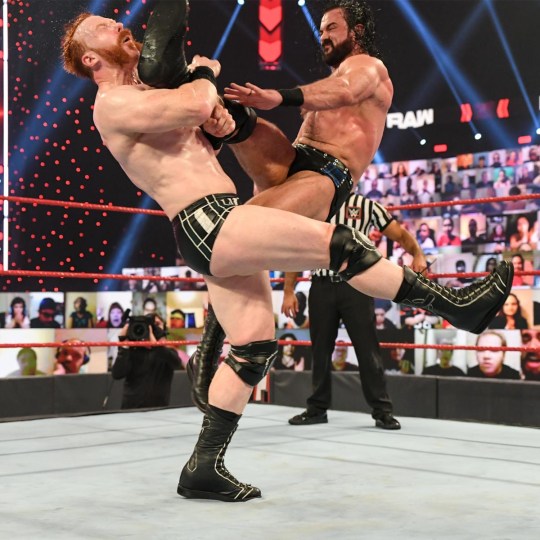 Sheamus and McIntyre had a WrestleMania-worthy match (Photo: WWE)

Sadly, the second match of the night didn’t live up to the same standards, with Nia Jax making disappointingly quick work of Naomi.

Elsewhere, Braun Strowman called out Adam Pearce and Shane McMahon for cheating him out of opportunities, and the latter announced the Monster Among Men would team up with the WWE official himself for a Raw Tag Team Title match.

Shelton Benjamin and Cedric Alexander retained the gold, with the former rolling up Pearce immediately after he was tagged in.

Meanwhile, Elias – who tried to set up a collaboration with Bad Bunny – had Jaxson Ryker at ringside as he lost to Damian Priest in a decent but unremarkable match with no real spark.

Randy Orton’s issues with Alexa Bliss – and thus The Fiend – continued too, as opened up on last week’s black vomit incident, before another version of himself appeared on screen with the promise he would pay for what he’s done.

Charlotte Flair discussed her WrestleMania ambitions as she put Asuka in her sights, and went on to defeat Shayna Baszler despite a pre-match beat down from the Women’s Tag Team champs.

RETRIBUTION – Mace, Slapjack and T-Bar – once again failed Mustafa Ali as they lost to Riddle and Lucha House Party in a rushed match.

This led to Ali challenging the US Champion immediately after, and he won in a similarly quick bout with an ugly ending as the storytelling outshone the in-ring action.