The duo left the arena during the show (PIcture: WWE)

WWE announcer Jimmy Smith has admitted he ‘doesn’t know’ what the future holds for Sasha Banks and Naomi after they walked out during Monday Night Raw.

The 44-year-old star is the lead commentator for the company’s flagship weekly show, and he has addressed the controversy after the Women’s Tag Team Champions legitimately left the arena shortly after being publicly announced for the main event of the night.

Smith insisted WWE has a duty to deliver on its promises, and the wrestling giant’s public statement – which referred to Raw as a ‘scripted’ show – makes things very complicated.

‘So where does that leave them? It’s hard when something like this becomes so public’, he said on his own Unlocking The Cage podcast, noting his doesn’t ‘know Vince McMahon personally’ on a level to predict his feelings.

‘That didn’t happen last night. So when you look at it that way, how do Sasha Banks and Naomi come back from this? I don’t know because this is not – if this were inside baseball, if the WWE had never released a statement about this, I would not be talking about it right now. Wouldn’t be a public issue. 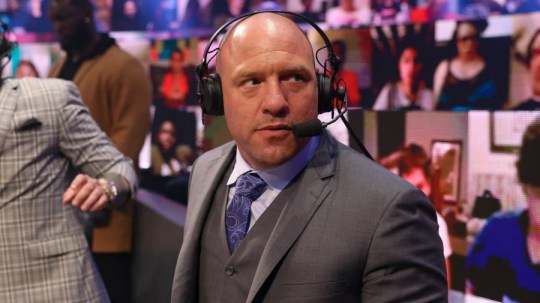 ‘You know, like, that’s behind the scenes. I generally don’t talk about behind the scenes stuff. I don’t give away angles, any of that. This is now incredibly public in an almost unprecedented way.’

Jimmy noted ‘there are many sides to a story’, but that he’d heard ‘everything the WWE is saying happened’.

‘I don’t know why Naomi and Sasha Banks walked out. I’ve heard rumors, but I’m not gonna repeat them just because it’s innuendo. I don’t know,’ he said, admitting he thought it was an injury until he got told more after Raw went off the air.

In WWE’s statement, the company claimed Naomi and Sasha ‘walked into WWE Head of Talent Relations John Laurinaitis’ office with their suitcases in hand, placed their tag team championship belts on his desk and walked out’.

‘And even though they had eight hours to rehearse and construct their match, they claimed they were uncomfortable in the ring with two of their opponents – even though they’d had matches with those individuals in the past with no consequence.

‘Monday Night Raw is a scripted live TV show, whose characters are expected to perform the requirements of their contract. We regret we were unable to deliver, as advertised, tonight’s main event.’

Smith suggested the company’s swift response was an attempt to not let ‘somebody change the narrative’.

Noting the duo were clearly ‘upset for some reason’ – as transcribed by Fightful – he added: ‘[WWE] wanted to get their version of events out very, very quickly, to show that “Hey, there’s no spin here. This is what happened. You might get a different competing story, but before somebody else spun it in a different way.” ‘

Naomi and Sasha are yet to publicly address the incident.