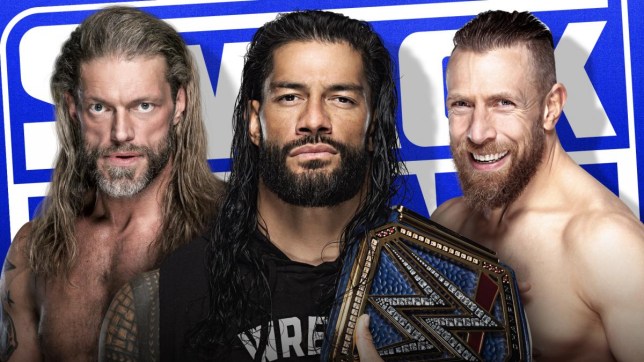 WWE has announced a special WrestleMania edition of SmackDown next week with two big matches.

Although this year’s edition of the annual extravaganza – which features the return of a live audience for the first time in over a year – is set to take place across two nights, it seems the company might be stuck for time.

As revealed on Twitter Spaces credited to WWE official Adam Pearce, two matches which fans may have expected to be included during the festivities on April 10 and 11 will instead be held on the Friday.

SmackDown Tag Team Champions Dolph Ziggler and Robert Roode will defend their titles against the teams of Dominik and Rey Mysterio, American Alpha (Otis and Chad Gable) and the Street Profits (Angelo Dawkins and Montez Ford).

The Fatal Four Way match has been brewing for a while now, and it seemed like a sure fire addition to WrestleMania itself.

Bosses have also decided to move the Andre The Giant Battle Royal, which was cancelled at last year’s event due to Covid restrictions.

The match – a staple of WrestleMania since its introduction in 2014 – is typically seen as a good way to get more superstars performing in front of a huge crowd at the stadium.

However, this doesn’t seem to be the case – with 22 wrestlers set to collide on the blue brand for the trophy.

This follows reports that the company wants to make the first entrance in front of a crowd truly special, given how long it’s been, which would mean no Kickoff matches on the first night, which is where the Battle Royal would probably fit in.

There’s more planned for SmackDown too, as Universal Champion Roman Reigns, the Rated R Superstar Edge and the Leader of the Yes Movement Daniel Bryan will address the WWE Universe two days before they meet in the main event.

There’s no doubt the go-home show is set to be an action packed one with some real stakes.

However, there’s some disappointment in the tag team scene missing out on a Mania spot, while the likes of Jey Uso, King Corbin, Shinsuke Nakamura and Mustafa Ali could justifiably have felt they’d have found their way into a match on the main card somehow.