CM Punk hasn’t been seen in All Elite Wrestling since All Out (Picture: AEW)

CM Punk has made his first public appearance on live television since the controversial events at AEW All Out two months ago.

After winning the AEW World Championship at the event on September 4, the WWE legend used the media scrum to launch an astonishing verbal attack on the company’s management as All Elite Wrestling owner Tony Khan sat by his side, accusing ‘irresponsible’ executive vice presidents for spreading ‘lies and bulls**t’ to the press.

The wrestler was then reportedly involved in an altercation with The Elite – Kenny Omega, and Matt and Nick Jackson – after Punk hit out at Matt , with Punk’s friend Ace Steel allegedly throwing a chair at Matt’s brother Nick and biting Omega.

On Thursday night, Punk appeared as a colour commentator for a Cage Fury Fighting Championships (CFFC) event, although he didn’t address any the incident on air.

‘I’m happy to be here! I’ve missed you, I’ve missed everybody watching at home, I’ve missed the fights. Tonight, I’m not gonna do that,’ he told broadcaster John Morgan.

Although boss Tony has repeatedly refused to comment on the matter, AEW’s Chris Jericho recently appeared on the Howie Mandel Does Stuff podcast and confirmed ‘there was a locker room fight’.

At the time, Sports Illustrated reported that the punishments would involve ‘suspensions for every person involved’, including Matt and Nick Jackson, Omega, Pat Buck, Christopher Daniels, Brandon Cutler and Michael Nakazawa.

Sources were quoted by the publication as saying that Punk and Ace Steel would either both be among those suspended, or could leave the company in the near future.

Steel has since departed, while Punk – who was injured at All Out and would have had to take time off to recovery – is yet to appear on screen, with his future unclear. 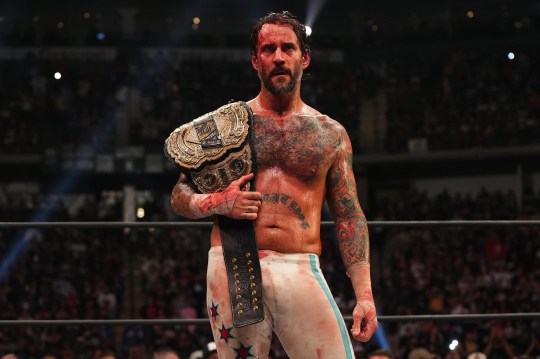 CM Punk won the world title before sitting down at the media scrum (Picture: AEW)

A third party investigation into the altercation has been completed, but again, no statement has been made by Tony Khan, AEW, or any of the parties allegedly involved.

The Elite – Omega and the Young Bucks – look set to return to AEW television after vignettes teasing their comeback.

There had been previous reports with sources suggesting Punk may have had a role to play in getting his former friend Cabana – real name Scott Colton – taken off air in AEW.

The pair were close friends for years, but they fell out following their legal battle against WWE doctor Chris Amann in 2014, and Cabana later sued Punk to try and get his legal fees paid.

Immediately after All Out, Punk told reporters: ‘The fact that I have to sit up here because we have irresponsible people who call themselves EVPs and couldn’t f***ing manage Target, and they spread lies and bulls**t and put into a medium that I got somebody fired when I have f**k all to do with him.’

Cabana himself has since returned to AEW television, having appeared as a surprise opponent for Ring of Honor World Champion Chris Jericho.