WWE: JBL reflects on ‘bloodiest ever match’ against Eddie Guerrero

John ‘Bradshaw’ Layfield admits his WWE Judgement Day match with Eddie Guerrero was ‘probably too much’.

The legendary on-screen rivals – who were close friends away from the ring – battled in one of WWE’s ‘bloodiest’ ever bouts in 2004 when they met for the WWE Championship.

During the bout, JBL struck Guerrero with a steel chair, and the late, great star accidentally cut too deep as he went to ‘blade’ himself – which used to be a prominent way for wrestlers to bleed on screen – with the ring and both stars ending up covered in his blood.

Reflecting on the clash, the Wrestling God exclusively told Metro.co.uk: ‘I’ve been in some pretty bloody matches, I think that’s the bloodiest I’d ever been in. Looking back in hindsight, I’m sure it was, but at the time I didn’t realise how much blood there was.

‘It’s hard to believe that I’m right across from him not realising it, but I knew there was a lot of blood – I didn’t realise how much there was.’

JBL admitted while they went too far – with Eddie having to be rushed to hospital after the match ended – he is in two minds because of his friend’s intentions and the way it’s gone down in history.


The Judgement Day match has gone down in history (Picture: WWE)

‘Eddie wanted to make the match. He passed out in the back and they ended up having to take him to hospital. It was a lot! I think it was probably too much,’ he said, before pausing.

For Layfield, he will always be grateful of the way Latino Heat (who tragically died in 2005) impacted his career, particularly when it comes to helping his drastic character change work as he shifted from a beer-swilling member of the APA with Ron Simmons to a Wall Street villain.

‘I had a lot of hesitation over whether it would work or not. People knew me in the Attitude Era, the ratings were so high then, everyone saw me as this guy with Ron Simmons,’ he explained. 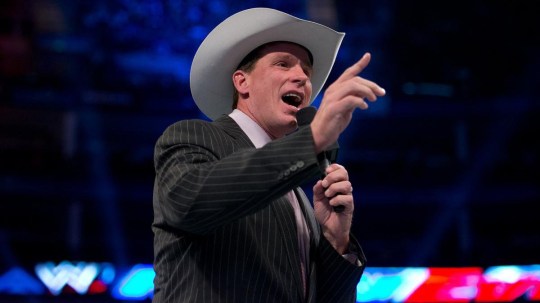 ‘I didn’t mind, I’d have been happy retiring as part of the APA, but they needed somebody to wrestle Eddie.’

They took their rivalry to outrageous heights, including a storyline moment when JBL gave Eddie’s mother a heart attack in the ring.

‘In El Paso that night, Eddie had smartened up some of his buddies, “They’re coming over the rail if they don’t”. He told me that afterwards,’ he laughed, reflecting on the stunt.

‘I had to get a police escort out of town, they wouldn’t even let me stay in the city of El Paso. They said, “You could be killed!” The police escorted me out the highway, all the way out of town and told me to drive a couple of hours away to fly out the next day.’ 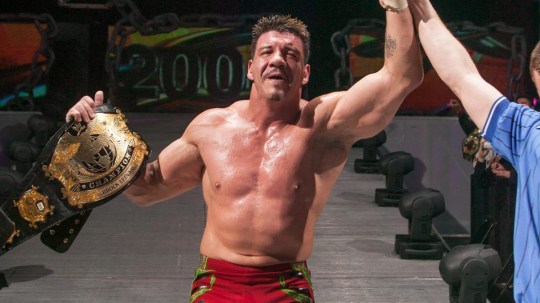 The pair battled over the WWE Championship (Picture: WWE)

Layfield noted he knew they had struck gold with the angle when someone tried to hop the barrier to confront him the very next week.

‘I knew right then we had a massive amount of heat. I loved it! I never thought I was in fear of my life. It’s part of the business,’ he insisted. ‘You live to get fans on that riot level, and if you get to a riot you’ve just gotta figure out how to survive and get out of it!’

JBL and Eddie’s legendary feud was almost a happy accident, with WWE scrambling for an opponent for the WWE Champion with a number of top stars out of action or gone.

‘I think Big Show had got hurt, Kurt Angle was hurt, Brock had left the ocmpany. It was just the matter of filling a need. I knew it was a one-off if it didn’t go well, and that’s what I was concerned about the most,’ JBL admitted.

‘And that’s what Eddie was concerned about, because Eddie didn’t wanna be the champion that had a guy he could only bring to a one-off pay-per-view match.’

He noted how Eddie had an old school, ‘competitive nature’ which made him strive to make his opponents look like a star.

‘The champion, you have a real sense of defeat if you can’t make the guy across from you, and Eddie did not want that sense of defeat because of his competitive nature,’ he smiled.

‘He really wanted to see me succeed – which I greatly appreciate. Without Eddie, there wouldn’t have been JBL past that match.’

Keep up with JBL on the Stories With Brisco and Bradshaw podcast.