The Tribal Chief has to face the Demon (Picture: WWE)

WWE Extreme Rules is upon us.

It’s the one night a year WWE goes extreme, with last year’s edition throwing up plenty of surprises with a literal Swamp Fight featuring Bray Wyatt and Braun Strowman, and Rey Mysterio losing an eye against Seth Rollins.

Yep, the pandemic has been a rollercoaster for wrestling fans, but this weekend things are back on track with no outlandish stipulations.

In fact, there aren’t really any stipulations at all, with the card itself absolutely stacked and loaded with high stakes – five title bouts and a grudge match – but only one being fought under Extreme Rules.

Still, WWE can continue its run of delivering on pay-per-view, especially given the quality match-ups on tap for Sunday’s event.

As ever, we’ve put together our regular guide with the full match card, streaming details and more.

WWE presents Extreme Rules tonight (September 25) with all the action on the main card kicking off at 1am for fans in the UK.

How can you watch WWE Extreme Rules 2021?

For fans in the UK, you can tune into the main Extreme Rules show by either streaming live or watching on demand via the WWE Network – or order the event via BT Sport Box Office.

What can you expect from WWE Extreme Rules?

The heat is on for Vince McMahon and his company, as WWE is facing viable competition for the first time in years as AEW keeps building momentum with each passing week.

Of course, the company deserves credit for its response the past couple of weeks with Raw in particularly seeing a marked improvement, SmackDown continuing in a similar vein and pay-per-views as a whole ranging from good to fantastic since SummerSlam 2020.

On paper, Extreme Rules is in a strange position of being stacked full of exciting matches, but still feeling like something’s missing – whether it’s because of some predictable results or a lack of stipulations befitting of the show’s name and legacy. 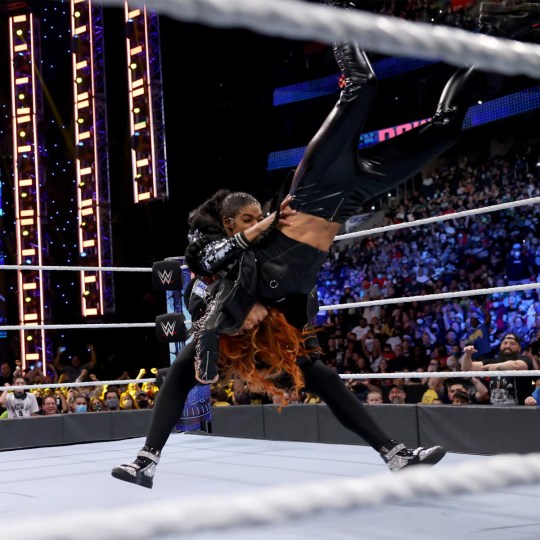 The EST will hope for a longer match against The Man this weekend (Picture: WWE)

There’s time for them to fix that with space for an extra match or two, or the opportunity to add to the sole Extreme Rules match, which pits Roman Reigns against The Demon.

It will be an enthralling match, and Finn Balor’s alter ego will give the Tribal Chief his toughest test to date, even if the Universal Champion will likely retain here to keep on rolling.

Damian Priest should definitely keep his title in a fantastic bout with Sheamus and Jeff Hardy, while Becky Lynch should similarly hold onto the gold – and at least she and Bianca Belair will get time to tell an actual story this time round.

The Usos will win over the Street Profits unless WWE wants to shake things up with the Bloodline, and Liv Morgan should beat Carmella – although given her loss to Zelina Vega on SmackDown, who knows how this’ll go down?

The one moment of unpredictability – save for a potential Demon win – comes as Charlotte Flair defends the Raw Women’s Title against Alexa Bliss with her latest run in jeopardy already at the hands of Bliss and Lilly.

Regardless of the results, this seems like an obvious home run for the company if the matches deliver at the level they clearly can.