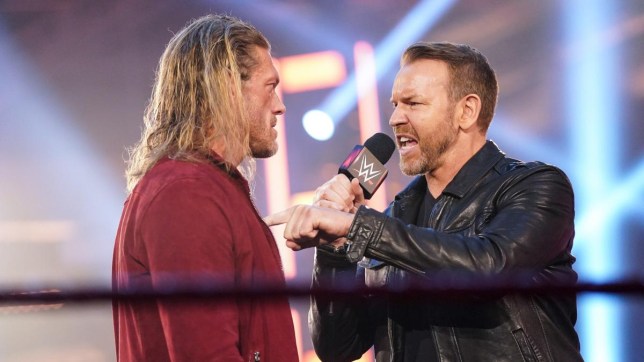 Will they ever shared the ring again? (Photo: WWE)

WWE legend Edge would still love to get in the ring with Christian Cage one more time despite his move to All Elite Wrestling (AEW).

The Rated R Superstar – who will be facing Daniel Bryan and Universal Champion Roman Reigns for the gold in the main event of WrestleMania 37 on Sunday – has opened up on the chance of him sharing the squared circle with his lifelong best friend before they both call it quits.

Edge returned to WWE at the 2019 Royal Rumble eight years after he was told he’d never wrestle again, while Christian returned in January at the same event seven years after his own in-ring career came to an end.

He’s since made the jump to AEW, and his pal thinks the chances of seeing them back in a ring together are getting slimmer by the day.

He exclusively told Metro.co.uk: ‘I would love to be able to, whether it’s as a team or whether it’s just a one on one match, it would be amazing. Especially where we’re both at in terms of the way we approach the storytelling of a match now.

‘I feel like we are really on the same page. Since I’ve watched his stuff since he’s come back I’m like, oh my gosh, the stuff we would do now. It would be so different, too! I don’t know if it ever happens, I really don’t.

‘I think possibly that ship has sailed – but we had that moment at the Royal Rumble and I have to look at the things that you do have, not the what ifs, right?’

Indeed, the memory of them both hugging at the Rumble earlier this year – and the very real emotions felt by everyone watching – will live long in the memory.

‘We got that moment and we both got this thing back that we were told we’d never happen again,’ he pondered. ‘And now we both have an opportunity to try and tie this in a bow that we never got a chance to before.

‘It was hanging threads before, right? Now we can tie it in a bow and at the end of this go, alright, job well done! If that’s not together – not a lot you can do, right?

‘At the end of the day, I just want him to be happy and to be respect where he’s plying his trade, as respected as he is in the locker room.’

Shortly after the Rumble moment, Edge told Metro.co.uk how he and Christian ‘needed’ to team up again after both being cleared – although this was before the latter decided to sign with AEW.

‘I would love it! I think at some point that would need to happen -just because there’s so many opportunities there,’ he said at the time. ‘Here’s the beautiful part, here’s where wrestling can work at its purest, best level.

‘So the look you saw on my face as Christian was coming down the ramp, that was real. That was me being part dumbfounded that we were both in the Royal Rumble in 2021 after being told we could both never do this again.’