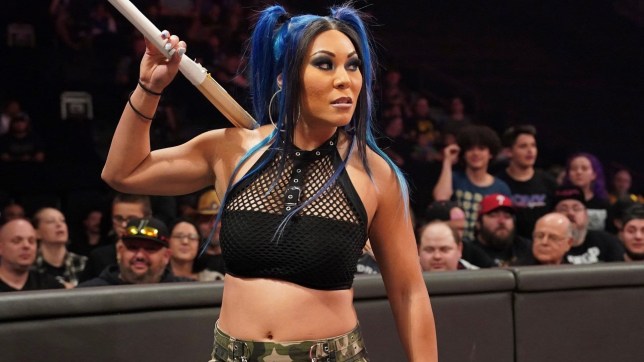 Mia Yim is now going by the name Michin

WWE has renamed Mia Yim following her return to the company and the star has explained the new moniker.

The former RETRIBUTION star – who recently joined forces with AJ Styles, Luke Gallows and Karl Anderson in The O.C. – will now go by the name Michin, with her WWE.com profile already updated after this week’s episode of Raw.

Despite a bit of confusion from commentary team Corey Graves and Kevin Patrick, it looks like Michin is more than just a nickname now, and fans will be trying to get used to the change.

After the show, she revealed the name’s meaning in Korean and tweeted: ‘미친 . Michin (Mee-chin). Crazy.’

She also shared a picture of South Korean pop band 4Minute and their single Crazy, and she retweeted a response from a fan who was delighted by the inspiration.

‘4MINUTE WAITTTTTTT SHE GOT IT FROM 4MINUTE?!?! OH I HAVE TO STAN NOW (sic)’, they wrote, while Mia replied with blue hearts to another fan who said: ‘I think it’s awesome that @MiaYim can pay homage to her Korean heritage with the name Michin.’

Meanwhile, with plenty of other viewers complaining about the name change and blaming WWE bosses for the switch, Mia thanked another fan who seemed to hit the nail on the head with their view on the situation.

They wrote: ‘Y’all. Mia literally owns the rights to her name and has always wanted to keep the rights no matter where she’s worked. I bet you money Michin was her idea especially with it being Korean.’

Name changes in WWE are nothing new, nor is some kind of backlash over them, despite the likes of GUNTHER (formerly known as WALTER) and Butch (Pete Dunne) playing down their own situations in the past.

Butch exclusively told Metro.co.uk: ‘I was aware of that, and that’s quite nervewracking at the time ’cause you know the reaction that’s coming from people. But, you just have to tune out from that and focus on what you can, and that’s the quality of the work you put out.

‘Seeing it catch on in different places, it’s almost more rewarding because I know who I am with Pete Dunne and the Bruiserweight, that’s established. But to start establishing something new is a really rewarding process.’

WWE Raw airs Monday nights at 1am on BT Sport 1.