The Hot Mess thought she could have added to the act (Pictures: Getty/WWE)

Former WWE superstar Chelsea Green has revealed she wanted to join ‘The Fiend’ Bray Wyatt and Alexa Bliss as part of their sinister group.

The 30-year-old wrestler – who was released from the company earlier this month along with the likes of Samoa Joe and IIconics duo Billie Kay and Peyton Royce – has opened up on the kind of storylines she pitched to play on the Hot Mess persona she honed before signing with the company in 2018.

She exclusively told Metro.co.uk: ‘I was always trying to figure out a way to incorporate myself into that group because I felt like that was such an extension of the Hot Mess in so many different way.

‘I felt the Hot Mess could fit in perfectly there! Then also, I do feel like that group, they’re so strong the two of them, but they’re almost missing that third person that can jump over to the women’s division.

‘Alexa’s the puppeteer, The Fiend’s the men’s side, so why can’t they have a woman to take over to the women’s division and then they’re taking over the entire show. Or then Alexa has a tag partner – there’s just so many different ways to spin it.

‘Lilly is so creepy and I love it, and I just imagined myself with that hair, with that dress, with that makeup. I just could picture it the minute I saw it!’

Although Chelsea – who has revealed she once had a 30-minute meeting with WWE boss Vince McMahon where he told her to talk him through her ideas – was immediately hooked by Alexa’s doll friend Lilly, she also wanted to play Bray’s longtime enigmatic partner of sorts, Sister Abigail.

There were also other ideas, including being the ‘Daisy Duke’ for Steve Cutler and Wesley Blake, and even joining up with Peyton and Billie with a typically creepy twist.

‘I wanted to be a Triconic at one point,’ she added. ‘Turn the IIconics into the Triconincs and turn into the Hot Mess on them, try to make them feud.

‘And eventually they would come back and turn it around on me. I had so many ideas!’ 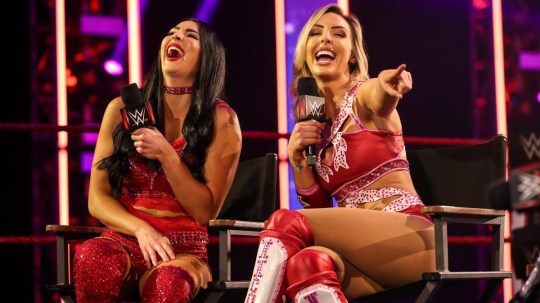 Billie and Peyton were also released this month (Photo: WWE)

Chelsea admitted while she loves embracing her sexuality, she enjoys the contrast that comes with playing darker character.

‘I love playing into my sexuality, I love being sexy and showing off what I worked so hard for,’ she said, before getting into her favourite persona to portray in the ring, or on screen.

‘Those kinda characters, the ones with a side of creepiness or a back story that you just can’t deny, that’s just what I fall in love with. I love different characters and I love something unexpected.

‘I love that people might see me in a bikini on Instagram and think that I don’t have anything else to me, but then see me wrestle and see that I actually don’t care that I looked stupid, or don’t care that I come off as a creep. I love that, I love unexpected characters.’

Two weeks after WWE announced their recent releases, Chelsea is now looking to the future, with the first episode of her new podcast 50 Shades of Green already out in the world.

She isn’t short of options in wrestling either, with ties to IMPACT Wrestling and AEW – the latter from her appearance at 2018’s All In event which is seen as the genesis of the promotion – and a desire to get involved in Ring of Honor.

‘I’m trying to talk to everybody. I’m trying to get my name back out there,’ she said. ‘My ideal, my vision would be to pull a Cody Rhodes and do a little bit of everything.

‘I would love that! I think that was genius of him, to get himself out there and to wrestle people he would never have been able to wrestle. That’s what I really wanna do.’

With the typical 90 day non-compete clause keeping her out of the ring until the summer, now’s time for Chelsea to lay the groundwork for the next stage of her career.

‘I feel like the past two years, I was just sitting and waiting for opportunities. Now I’m really to got out and just take them,’ she smiled.

‘I’m kinda just putting feelers out there like, guys, I’m a free agent. July 14th is my date – whatever you guys need, I can do.’

*Chelsea Green has launched the 50 Shades of Green podcast with a new episode every Monday.