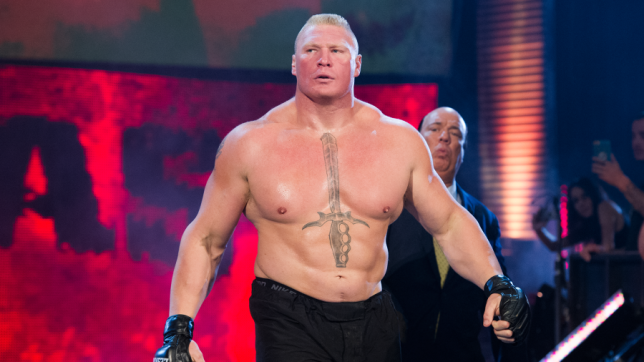 Can he follow in Brock Lesnar’s (front) footsteps? (Picture: WWE)

The legendary wrestler – who leads the company’s black and gold brand – discussed the clear potential surrounding the 6 foot 3, 300lbs American football star, who bares an uncanny resemblance to the former world champion.

Speaking to media including Metro.co.uk before this weekend’s NXT TakeOver: Vengeance Day, he told Sportskeeda: ‘People look at someobody like Parker and they see – “oh my God, he looks like Brock Lesnar!”

‘Immediately they go, “Oh he’s the next big thing! He’s got a big personality!” We’ll see. For all of this, you have to be ready to be a performer.

‘Even Brock Lesnar wasn’t a guy… as amazing – and Parker is as well – as an athlete as he is, you gotta be trained, you gotta know what you’re doing, everything’s gotta be done safely.’

He added: ‘I’m incredibly excited about Parker Boudreaux coming in, Bronson Rechsteiner, we have a lot of people coming in the door. Just as I am on people who have been here for awhile.’

Parker’s signing – which comes after the man calling himself the new Next Big Thing was spotted backstage at NXT – is an exciting one for fans, and the young star has the opportunity to rise up the ranks.

Triple H added: ‘Everyone we bring in the door, we want to succeed to the best of their ability and capability. All the tools are are there for them to use!

‘I say this a lot a the Performance Center that the generations that came before you had none of these tools. They got trained, learning from the people around them as they were getting to do this.’

However, the current landscape with limited fans is a tough one for anyone taking their first steps in the business.

He admitted: ‘In some ways they’re limited by the environment of today. There’s no live events, so to, speak right now.’