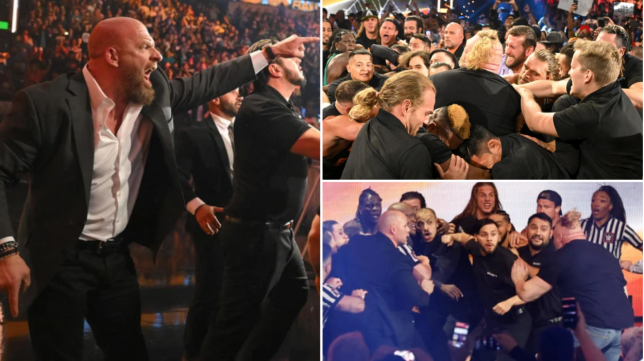 WWE boss Triple H was forced to get between Brock Lesnar and Bobby Lashley on Monday Night Raw as he threatened to call off their Crown Jewel match.

The two heavyweights are set to clash in Saudi Arabia this weekend as the stadium show in Riyadh, but their explosive rivalry continued to turn up the heat as security, WWE officials, referees and other wrestlers tried to separate them.

Even the boss came out to ringside to try and calm things down without much luck initially, before he insisted anymore physicality would see the huge match scrapped.

Although Lashley and Lesnar first faced off at the Royal Rumble in January, their feud really kicked off last month when the latter cost the All Mighty his United States Championship.

A pre-match attack from the Beast left Lashley vulnerable going into a title clash with Seth Rollins, and the Visionary was able to capitalise to win the gold.

Since then, Brock and Bobby have been at each other’s throats, and just two weeks ago the former US Champ sent his rival crashing through a table as they brawled at ringside.

On Monday night, the plan was for them to sit down – in separate areas of the arena – for an interview hyping up Saturday’s match, but that’s not how it ended up going down.

First, Brock didn’t turn up for the interview, leaving his opponent to answer the first question before the Beast’s music hit and he came out, challenging Bobby to a fight. 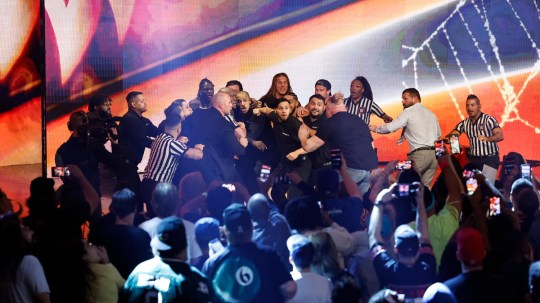 Not surprisingly, the All Mighty obliged and made his own entrance as they started fighting on the ramp before plenty of people tried to get them to stop.

This weekend’s Crown Jewel card is looking absolutely stacked, with a battle of the giants also lined up between Braun Strowman and Omos, while Bianca Belair will defend the Raw Women’s Championship against Bayley in a Last Woman Standing Match.

The Undisputed Tag Team Titles will also be on the line as The Usos face off against the Brawling Brutes, and Drew McIntyre will get his hands on Karrion Kross in a Cage Match.

The O.C. and Judgment Day are set to collide in a six-man tag match, and the main event will see Roman Reigns face Logan Paul for the former’s Undisputed WWE Universal Title.

WWE Crown Jewel airs Saturday (November 4) at 4pm on the WWE Network. Watch Raw every Monday night at 1am on BT Sport 1.