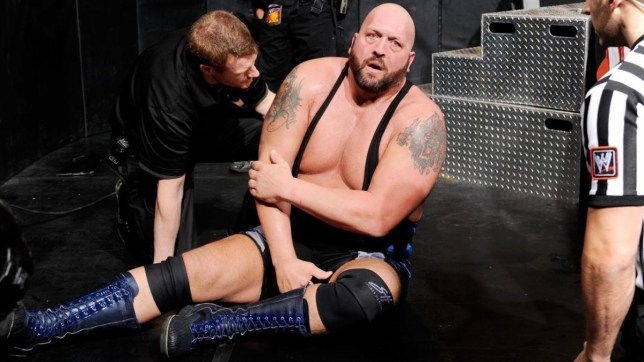 Even legendary wrestlers have their awkward moments (Photo: WWE)

AEW star Paul Wight has admitted he once ‘s*** himself’ in the middle of a WWE ring – and Brock Lesnar is to blame.

The legendary star – who spent 22 years in Vince McMahon’s company as The Big Show before jumping ship to the rival promotion earlier this month – recalled the mortifying moment thanks to a combination of ‘bad food’ and Lesnar’s F-5 signature move.

Appearing on Renee Paquette’s Oral Sessions podcast, he said: ‘In Cape Town, I had some bad food and this is back when I had the leather pants you know, thank God.

‘He had dumped Paul Heyman in the ring too. That was the finish and then I would usually get up, pull Paul up, throw Paul over my shoulder, and carry Paul out. That was the end of the night for the heels. We were totally humiliated.

Renee seemed shocked by the story, but noted how lucky it was that he was wearing leather pants.

Meanwhile, Wight couldn’t stop laughing at his own misfortune, and revealed he had to wash his clothes round the back of the venue after the show.

He added: ‘So, meanwhile, I’m the guy out the back of the arena with a hose, hosing off my pants.’

Wight made his first appearance on AEW Dynamite last week as he teased the arrival of another Hall of Fame-level superstar coming into the company, which turned out to be Christian Cage.

Captain Charisma also joined Renee recently, and admitted he never would have expected himself to join All Elite Wrestling just weeks after making a shocking in-ring return at the Royal Rumble in January.

‘No, I would not think that at all to be honest with you. It all happened really quick I wasn’t sure how it was gonna go; All the talks that I had [with WWE] were very cordial,’ he said, adding that Renee’s husband Jon Moxley played a big role in getting him on board.

‘He talked to me and had his opinions and stuff like that it made me kind of think that like okay, maybe I am doing myself a disservice if I don’t at least explore all my options,’ Christian explained.

‘And at this final stage of my career. I ended up having a conversation with Tony [Kahn] and it escalated very quickly. It went very fast. Like within a week it was a done deal.’