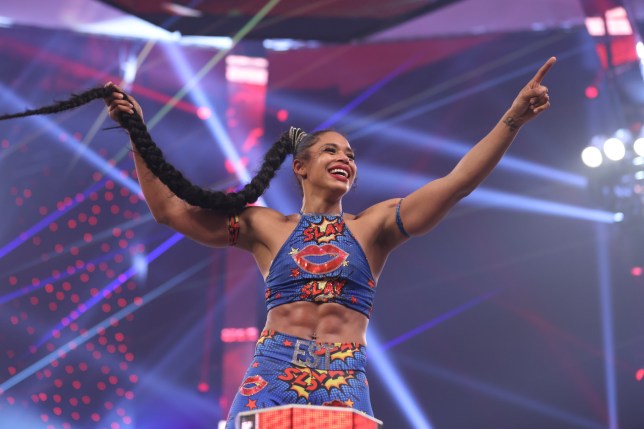 The EST of WWE has handmade every single outfit she’s worn to the ring (Photo: WWE)

WWE superstar Bianca Belair has always worn her own handmade outfits to the ring – and WrestleMania 37 won’t be any different.

The so-called EST of WWE – who became the first black woman to win a Royal Rumble match last weekend and booked her own ticket to the Show of Shows in April – has opened up on her plans for what will be the biggest match of her career.

She exclusively told Metro.co.uk: ‘I have no idea what I’m gonna do for WrestleMania yet because I feel it’s on the grandest stage so my gear has to live up to the hype.

‘I’m very nervous, ’cause I don’t even know – can I make something, with these hands, that can live up to the hype of the grandest stage, WrestleMania.

‘But in my mind, I’m thinking I’ve made my gear from the very beginning, there’s no way that I just cannot make my gear for WrestleMania.’ 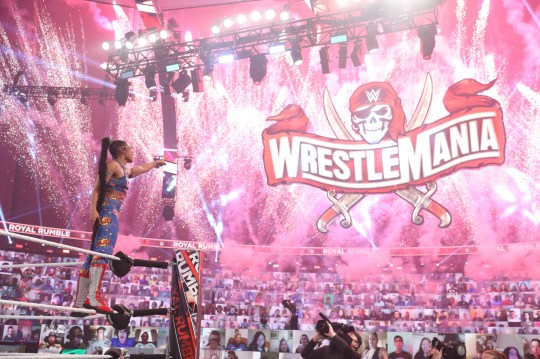 What does Bianca have planned for WrestleMania? (Photo: WWE)

One thing’s for certain – Belair will be adding to her vast collection of unique outfits when she steps out at Raymond James Stadium with fans back at a WWE show for the first time in a year.

‘So I am going to make my gear,’ she confirmed. ‘I have no idea what I’m gonna do yet, but I’m probably going to end up making 10 different gears up until WrestleMania.

‘And then the night before, something’ll come to my brain where I’m like, “This is what I have to do” and I’m gonna be up all night the night before WrestleMania making my gear.

‘That’s probably what’s gonna happen, we’ll see what happens. But hopefully it lives up to the hype – and I am gonna make it with my own hands!’

Bianca is a multitalented star, and fans are treated to a full spectacle each and every time she shows off her athletic prowess in the ring.

She has always stood out with her own designs, and even used time at home during the pandemic to work on her masterpieces.

She previously told us: ‘I have more time to create gear. I’ve probably made more gear in this year than I’ve made since I’ve been in WWE.

‘I have a room full of just gear that’s ready to be worn. I’m ready to have so many matches so I can just show this gear off, because otherwise it’s just going to sit in the closet.’

*Catch Bianca Belair on WWE SmackDown every Friday at 1am on BT Sport.

£5.5m lottery winner ‘stabbed in the face by her partner’ at luxury home three years after life-changing win

Millionaires drive £100k Bentley to a campsite after swapping hols with a skint single mum on Rich Holiday, Poor Holiday