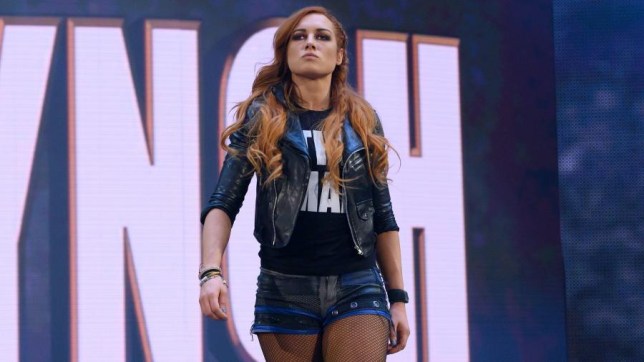 Will The Man make her comeback? (Photo: WWE)

Becky Lynch has teased a sensational WWE return for WrestleMania 37.

The Man – who became The Mom in December when she and fiancé Seth Rollins welcomed baby girl Roux into the world – hasn’t been seen on screen since May last year when she revealed her pregnancy and gave up the Raw Women’s Championship.

Now, it appears she could be primed for an epic comeback on the grandest stage as fans return at Raymond James Stadium on Saturday night.

Becky has got everyone talking ahead of ‘Mania after posting a workout photo looking in incredible shape five months after giving birth to her daughter.

However, it’s not just the picture that’s got everyone talking – take a look for yourself and read the first letter of each line.

Seriously, this is brilliant…

Is The Man returning on night one?! Stranger things have happened, and it’s a very real possibility after Stephanie McMahon refused to confirm or deny it in a recent interview.

Interestingly, it comes after WWE president Nick Khan was quizzed on both the future of Becky and her rival Ronda Rousey, who t hasn’t been seen on the wrestling giant’s programming since losing her Raw Women’s Title to Lynch in the main event of WrestleMania 35 in 2019.

Speaking to Colin Cowherd – as transcribed by Fightful – he said: ‘Ronda is going to be coming back at a certain point in time.

‘Becky Lynch, she just had her first baby, she will be coming back at a certain point in time in the not too distant future.’

Fans will be delighted by the news, with both women proving popular and among the very best across the entire roster.

Ronda’s impending return may come as a surprise to some, after she made some foul-mouthed remarks about the fans in the past.

She said: ‘What am I doing it for if I’m not being able to spend my time and energy on my family, but instead spending my time and my energy on a bunch of f**king ungrateful fans that don’t even appreciate me?’

However, she did previously tease the prospect of a return in a tweet directed at Natalya.

Responding to WWE’s tweet about their Women’s Title match on Raw in 2018, she wrote: ‘One of my fav matches – such a huge challenge in so many ways, what a crazy day… looking forward to a rematch someday (sic).’