Tess couldn’t believe her luck when she received a special message from Alessia Russo (Picture: BBC)

One of the England team’s youngest fans couldn’t believe her luck when she was given the very shirt Alessia Russo wore during their historic Sweden game ahead of the Women’s Euros final today.

Tess Daly, eight, won the nation’s hearts when she was seen showing off her dance moves to Sweet Caroline at England’s match against Sweden last week, which saw the Lionesses secure a staggering win of 4-0 against their rivals.

The youngster, who attended the game at Bramall Lane Stadium in Sheffield, made it to screens after dancing and belting out Neil Diamond’s classic wearing a full England kit.

Ahead of England’s game against Germany in the Women’s Euros final on Sunday evening, Tess joined BBC One’s Gaby Logan, Ian Wright, Alex Scott and Jonas Eidevall in the studio at Wembley Stadium to discuss her newfound viral fame.

‘It feels crazy. I’m feeling very positive and I feel we can win this match,’ Tess told the hosts.

Praising forward Alessia Russo’s performance in the tournament, Tess said: ‘I feel like she can do a lot of things to help our team.’ 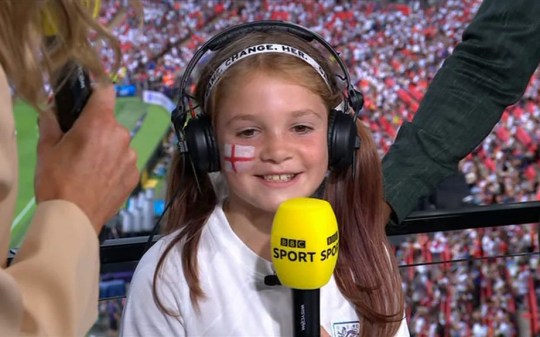 Gabby agreed: ‘She’s been doing brilliantly hasn’t she,’ before adding: ‘Actually speaking of Russo, we’ve got a little message from her…’

Russo then appeared on-screen in a pre-recorded message, and said: ‘Hi Tess it’s Alessia here, just want to say thanks a massive thank you for all of your support this summer. We’ve loved hearing you on the TV and on Twitter, so much so that I’d love to give you this shirt just to say thank you.

‘Hope you love it and we hope to see you soon.’

Tess was visibly shocked and covered her mouth before exclaiming: ‘Oh my God.’

A message from Russo on the football shirt read: ‘To Tess, best wishes. A Russo,’ prompting Gabby to reveal: ‘That is the actual shirt from the Sweden game.’ 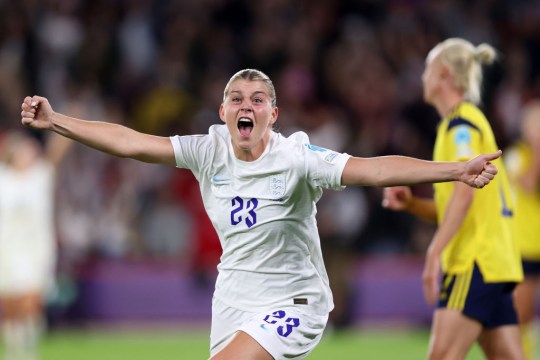 Tess responded while jumping up and down: ‘That is amazing, what?!’ before promising to keep it safe.

Former footballer and presenter Alex Scott then asked: ‘I’m a huge fan and a huge fan of your dancing as well. Are we going to see more of that today?’ to which the youngster replied: ‘Yes, definitely.’

Tess then also revealed: ‘I let my mum have the other ticket and then we managed to get a third one for my brother. He’s 16.’

She then shared her prediction for tonight’s result: ‘I think 3-2 but at the same time i just hope we win it.’