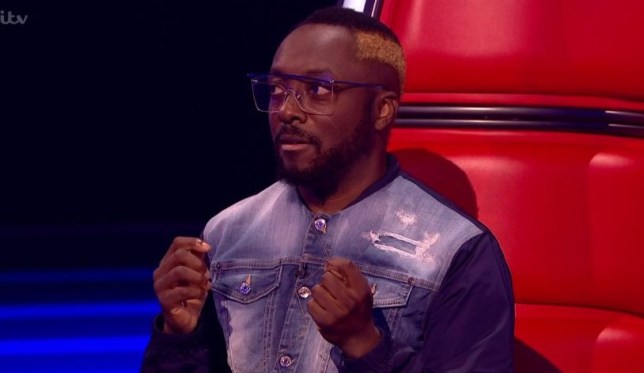 The Voice’s Will.i.am has urged viewers to ‘stop Asian hate’ with an impassioned speech after the recent shootings in Georgia.

It comes after a 21-year-old man has been arrested after a two-hour massacre saw eight people shot dead at massage parlors in Atlanta, a majority of them women of Asian descent.

Will.i.am performed the Black Eyed Peas song Where is the Love? With contestant Okulaja on Saturday’s The Voice final, before delivering an emotional speech to viewers.

After speaking about the relevance of the song’s lyrics, Will said that people must learn to ‘stop Asian hate’, adding that it ‘makes no sense’.

‘I think Okulaja did awesome,’ Will said. ‘I love what Okulaja stands for and the things he’s trying to achieve and accomplish. The fact that he’s trying to apply himself towards success so he could go out there and make a difference to the world.

‘He could be just saying, “I want to be famous and I want to make money”. He’s saying, “I want to go out there and make a difference”. For an 18-year-old to be that focused on applying love to a very complex world right now… There’s BLM happening, there’s people going out there doing horrible things to Asian people.’

Will went on to say: ‘Stop the Asian hate. It just doesn’t make any sense at all when we are all coming together as people. So I love what this young man is trying to contribute.’

The speech was received gratefully by viewers, who praised his words.

‘Will.i.am just proper choked me up!’ one said.

‘Okulaja and Will did amazing,’ another said. ‘Where is the love is such an incredible song and Will raising awareness for stop asian hate was so important.’

Where is the love?
yes what an amazing performance?
BLM all the way and as will said stop Asian hate crimes throughout the world #thevoiceuk

Thank you Will I am for denouncing the hatred towards anyone that look Asian. We shouldn’t be here, now to have to do that. #TheVoiceUK

okulaja and will did amazing, where is the love is such an incredible song and will raising awareness for stop asian hate was so important #thevoiceuk

#TheVoiceUK
Well will i am just proper choked me up !
We could have world peace if left to us ordinary none hating peoples
Xxðºðð¦

Will is the latest star to speak out after the Asian community in Atlanta was targeted earlier this week in the horrific attack.

The Office star Mindy Kaling was one of many stars who shared their dismay over the attack as she tweeted: ‘The targeting of our Asian brothers and sisters is sickening, but not surprising given the normalizing of anti-Asian hate speech in the past year. We have to #StopAsianHate, enough is enough!’

Robert Aaron Long, of Woodstock in Georgia, was arrested earlier this week after a dramatic police car chase which resulted in the suspect’s car being shunted off the road.

The eight victims were killed in three separate shootings at two spas and a massage parlour in and around Atlanta.

In the first shooting two Asian women, one white woman and a white man were killed at Young’s Asian Massage, in the north of the city.

Then in short succession, three Asian women were shot at Gold Spa, before another Asian woman was killed at Aromatherapy Spa. These parlours were around 30 miles away from the first.

The Voice UK is available to watch on ITVHub.