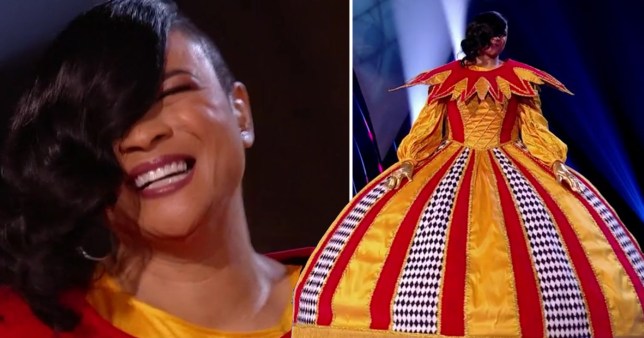 The Masked Singer’s Harlequin was revealed to be Gabrielle (Picture: ITV)

The Harlequin has become the ninth star to be booted from The Masked Singer UK, as well as being this week’s second star to be unmasked.

Viewers and the judges were surprised as Harlequin removed their mask and was revealed to be Gabrielle.

Gabrielle shared a photo of her watching the show at home as she told her followers: ‘The best secret I’ve ever kept’.

The panel had no idea who was under the Harlequin mask, with Rita Ora repeatedly leaning towards Des’ree.

Gabrielle revealed why she took on the show: ‘Because it was exactly that, a challenge! It was an opportunity to do something I never thought I would, I say no thank you to a lot of TV shows that just aren’t me but this was about singing and me pushing myself.

‘This last year has been so crazy so why not making it even more crazy by singing night after night dressed as a Harlequin.’

She revealed that even her family didn’t know she was behind the Harlequin, explaining: ‘Keeping the secret isn’t too hard for me, I had to make up an excuse to be away while filming but I just said I was working and no one really asked what I was doing.

‘My manager was with me every day so I had someone I could talk to about everything, I can’t wait for my family to find out what I have been up to.’

On her costume, Gabrielle said: ‘I LOVED my costume. My mask was really quite heavy but it was just fabulous and I felt so regal wearing it.

‘I loved how the costume department changed something so slight on the mask every episode. The costumes were all absolutely mind blowing, the detail and work that goes into them is just crazy. 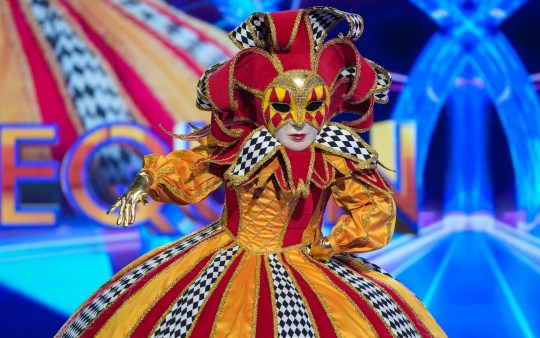 Gabrielle remained in character with her mannerisms throughout (Picture: ITV) 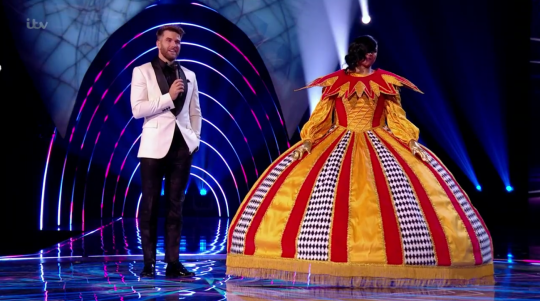 ‘As soon as I put my costume on I became Harlequin. I was aware my mask wasn’t ‘cute’ in comparison to some of the others and I didn’t want to appear too harsh so waved a lot and did heart shapes with my hands, I found it really easy to stay in character and loved that side of things.’

The latest episode of the show saw all five remaining singers take to the stage, which consisted of Harlequin, Dragon, Sausage, Robin and Badger.

It was also another double elimination, and Dragon became the first of the night to leave, being unmasked as Sue Perkins.

Last week’s show saw the first double elimination as the Viking was revealed to be Morten Harket, the lead singer of A-Ha, while the Blob turned out to be Sir Lenny Henry.

Tomas Soucek controversially sent off for ‘elbow’ on Mitrovic in stalemate