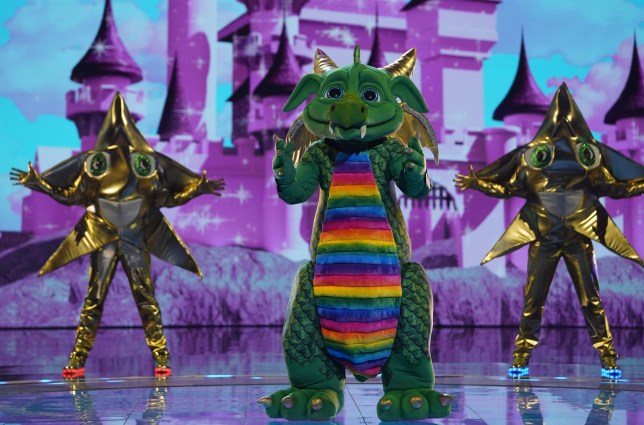 The Dragon was revealed to be Sue Perkins (Picture: ITV)

The Dragon has become the eight contestant to be voted off from The Masked Singer UK, as well as being this week’s first star to be unmasked.

The panel and viewers were left stunned as Dragon removed their mask and was revealed to be Sue Perkins.

Fans had suspected that Sue Perkins might be under the mask as clues about eating all kinds of weird items didn’t point to a stint on I’m A Celebrity… Get Me Out Of Here but to her appearance on The Supersizers.

The appearance of a radio or podcast microphone and the love of food and cooking had also pointed to it being Sue under the Dragon mask.

Viewers also speculated that the voice might have given it away, suggesting that it sounded like the presenter.

The connections to food also tie in to Sue presenting the Great British Bake Off as well as appearing on Celebrity Masterchef too. 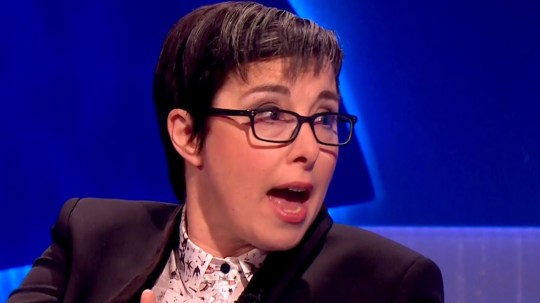 Sue was over the moon to be given the Dragon costume – and even added her own touches to the look.

She said: ‘I was so chuffed with Dragon. The suit was a little uncomfortable at first, but the incredible team of costume designers worked on it so that it ended up fitting like a big, scaly glove.

‘I loved it from the start, but I added the smoke tubes, as I wanted the character to burp and fart. I’m classy like that.’

Sue decided to do the show because its the last thing anyone would expect of her, adding: ‘It just felt so utterly counter-intuitive that I had to do it. 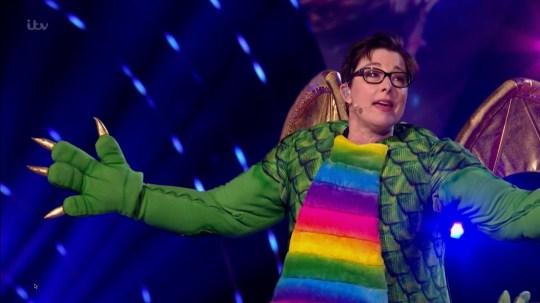 Sue said she found it easier to perform with her identity obscured (Picture: ITV)

‘I’m usually up a mountain or down a river these days – so I’m probably the last person that anyone would think of in a musical entertainment context. I got an awful lot of joy out of hoodwinking the panel.’

Sue tweeted after she was revealed: ‘What an absolute RIDE. I loved every second of it.

‘Thanks to all of MS team who helped me keep the secret – and most of all to Anna my voice coach and Steve the MD who helped drag the wee voice out of Dragon. Xxxxxx (Ps. love to ⁦@michellevisage⁩ and ⁦@courtneyact⁩ )’.

What an absolute RIDE. I loved every second of it. Thanks to all of MS team who helped me keep the secret – and most of all to Anna my voice coach and Steve the MD who helped drag the wee voice out of Dragon. Xxxxxx
(Ps. love to â¦@michellevisageâ© and â¦@courtneyactâ© ) pic.twitter.com/rGhQvpAVba

The fake accent and the incredible singing voice had confused the panel, however, as other guesses included Courtney Act, Michelle Visage Rebel Wilson, Miranda Hart and Amy Schumer among others.

The latest episode of the show saw all five remaining singers take to the stage, which consisted of Harlequin, Dragon, Sausage, Robin and Badger.

Last week’s show saw the first double elimination as the Viking was revealed to be Morten Harket, the lead singer of A-Ha, while the Blob turned out to be Sir Lenny Henry.