Who are the new instructors on SAS: Who Dares Wins?

There’s a new line-up of instructors on SAS: Who Dares Wins (Picture: Channel 4)

SAS: Who Dares Wins returns to Channel 4 on Sunday night with two new instructors in charge.

The newcomers will put the 20 new recruits through their paces across some brutal challenges and gruelling tasks as the show moves to Jordan for its hottest and driest instalment yet.

Here’s everything you need to know about Chief Instructor Rudi Reyes and DS Remi Adeleke. 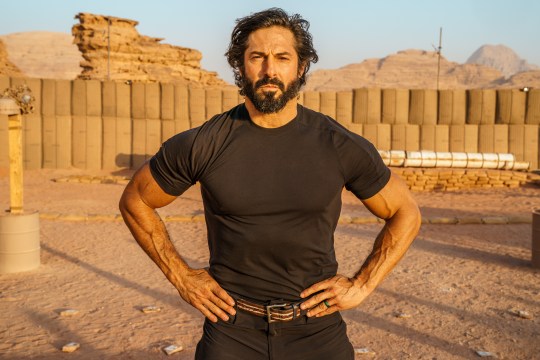 Rudy was born in 1971 at Richard’s Gebauer Air Base in Missouri. His father was a US Marine who fought in the Vietnam war.

The new SAS star joined the United States Marine Corps at the age of 26. After impressing in the recruitment phase, he went on to become an elite Recon Marine.

Rudy became a highly decorated Special Forces operator, leading over 50 patrols behind enemy lines. He served one tour in Afghanistan and two tours in Iraq as a Recon Marine Team Leader and Scout Sniper. After leaving the marines, Rudy worked as a counter

After leaving the military, Rudy spent time in Africa where he trained wildlife preserve rangers in anti-poaching tactics and later went on to found Force Blue, a veteran non-profit that pairs former special operators with marine scientists to work rebuilding and restoring coral reefs, saving turtles, and working within the conservation community. He also competes and trains people for adventure racing and martial arts.

Rudy has made a number of television appearances, having previously featured in the HBO miniseries Generation Kill in 2008. He has worked on many survival shows, including Apocalypse Man and Ultimate Survivor Alaska. He was also one of the main contributors to multiple Bafta-nominated documentary series Once Upon a Time in Iraq.

After serving 13 years in the military, he went on to work in film and TV consulting, directing, and writing.

Remi starred as an actor in the 2017 franchise film Transformers: The Last Knight, Seal Team CBS, the Universal thriller directed by Michael Bay, Ambulance, and the August 2022 Lionsgate blockbuster The Plane.

He also had a recurring role on Amazon’s TV adaptation of the New York Times Best Seller Terminal List.

‘The old rules are out, the new rules are in, and these are my rules, and you guys are gonna pay the man,’ Remi said of his different approach to training.

‘I play the role of the hard ass, the one you do not want to cross, because if you do, you’re not gonna get any grace. I took a lot of that from watching my instructors and seeing how different Seal instructors play different roles.

‘I tried to play that role, but then, towards the end, as we weeded out those who weren’t strong enough to last, I began to soften a little bit and build them up a little bit, because of how hard I tore them down.’

SAS: Who Dares Wins airs tonight at 9pm on Channel 4.