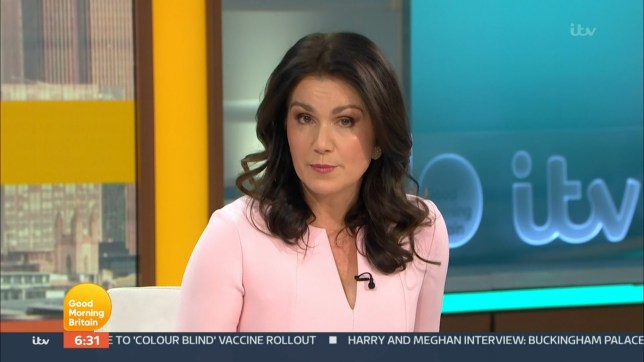 When will Susanna return to present GMB? (Picture: ITV/Rex)

Ahead of the Easter holidays, Good Morning Britain presenter Susanna Reid was supposed to take her usual break for this time of year.

So when it was announced on Friday that Queen Elizabeth II’s husband Prince Philip, the Duke of Edinburgh had died at the age of 99, Susanna’s break from the ITV programme was cut short.

Susanna appeared on Monday’s show alongside Kate Garraway, saying that it was an ‘honour’ to be back – with the pair being criticised by some viewers for not wearing black as a sign of respect for the late royal.

However, since Monday, Susanna has been absent from GMB again.

So where is Susanna on GMB and when will she be back?

Where is Susanna Reid on Good Morning Britain?

Susanna’s Easter holiday was originally supposed to last for two weeks, meaning that she was due to return to GMB on April 19 after her most recent appearance on March 31. 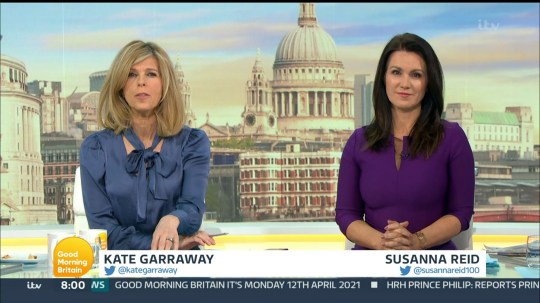 Nonetheless, the TV presenter was in the ITV studio on Monday morning to host the morning news show with Kate, telling viewers: ‘Today of course, we are remembering, honouring and celebrating the life of Prince Philip, the Duke of Edinburgh.’

‘And it’s an honour to be here early this morning to be able to do that beside you Kate,’ she added.

During the show, Kate asked her: ‘You were meant to be on holiday weren’t you?’, to which Susanna replied: ‘Yes, but it’s a very special occasion.’

Susanna hasn’t confirmed on her social media channels if she has resumed her Easter holiday after her return to GMB.

However, if she doesn’t host the show for the remainder of the week, one could assume that this is the reason why.

When will she be back?

If Susanna has continued with her Easter break as planned, then it’s likely she’ll be back on GMB on Monday April 19.

However, considering her unexpected return on Monday, there is a possibility she could resume her presenting duties earlier than scheduled.

While remembering the life of Prince Philip on GMB, Susanna recalled a time when he was ‘incredibly direct’ with her during a Duke of Edinburgh gold award ceremony.

When Susanna told the royal that she ‘failed to finish’ her own Duke of Edinburgh expedition, she said that he replied by stating: ‘What on earth is wrong with you?’, before moving onto the next person.