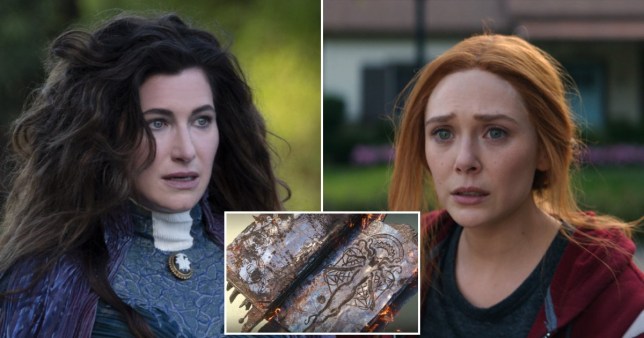 According to Agatha, Wanda has much to learn (Picture: Marvel Studios/Disney)

Warning: spoilers ahead if you’re not caught up with the WandaVision finale.

The season finale of Marvel’s WandaVision has finally been released on Disney Plus, with episode nine seeing Wanda Maximoff (Elizabeth Olsen) finally realise her true self as the Scarlet Witch after defeating witch Agatha Harkness (Kathryn Hahn) and taking possession of the Darkhold.

The final instalment of MCU’s TV series was action-packed to say the least, with Vision and White Vision (Paul Bettany) going head to head in a match of brute strength and wits and the true identity of Pietro Maximoff (Evan Peters) finally being revealed… or so we have been led to believe.

It also introduced many viewers to an ancient book called the Darkhold, which Agatha describes as the ‘Book of the Damned’.

Having informed Wanda that she is a mythical being called the Scarlet Witch, Agatha states: ‘Did you know there’s an entire chapter devoted to you in the Darkhold? That’s the Book of the Damned.’

She then recites lines from the chapter, stating: ‘The Scarlet Witch is not born, she is forged. She has no coven, no need for incantation. Your power exceeds that of the Sorcerer Supreme. It’s your destiny to destroy the world.’ 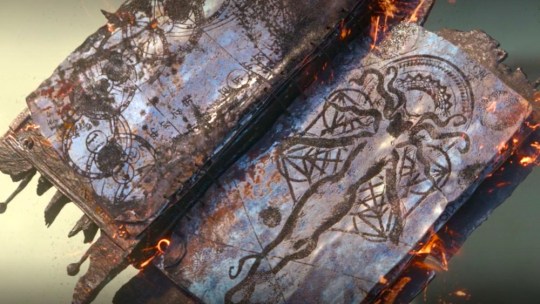 The Darkhold features a chapter devoted to the Scarlet Witch (Picture: Marvel Studios/Disney)

So what is the Darkhold and how will it affect Phase Four of the MCU?

What is the Darkhold in the WandaVision finale?

After the Darkhold is unveiled by Agatha, in the second post-credits scene in the WandaVision finale, it is revealed that Wanda is now in possession of the book.

Wanda is shown rifling through the pages of the ancient object, clearly catching up on everything she needs to know within its pages.

This isn’t the first time the Darkhold has been shown in a Marvel TV series, as it was also referenced in spin-offs Agents of S.H.I.E.L.D. and Runaways. 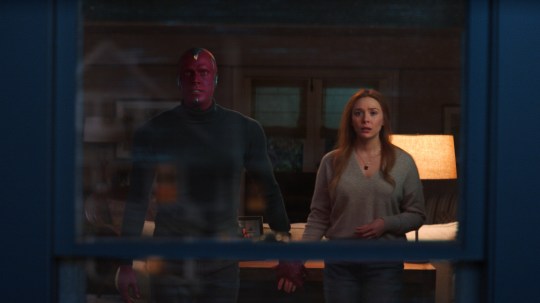 Vision and Wanda say goodbye to their life in Westview in the season finale (Picture: Marvel Studios/Disney)

Otherwise known as the Book of Sins and the Book of Spells, the Darkhold is exactly that – a book of magic and spells.

However, it is an extremely dark object, having been created using dark matter from the Hell Dimension.

In the Marvel comic books, use of the Darkhold can result in a reader’s mind becoming corrupted.

Now that Scarlet Witch is poring over its contents, does this mean the same could happen to her?

How will the Darkhold affect Phase Four of the MCU?

WandaVision is the first release in Phase Four of the MCU (Marvel Cinematic Universe), which began all the way back in 2008 with the launch of Iron Man, the first film in Phase One.

At the very end of the WandaVision finale’s second post-credits scene, when Wanda is avidly reading the Darkhold, she hears her sons calling for her. 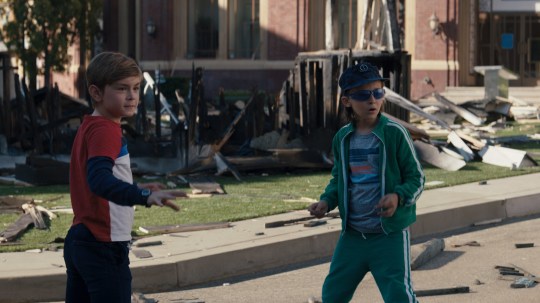 Wanda hears her sons calling for her when she’s reading the Darkhold (Picture: Marvel Studios/Disney)

Having created her children using her power inside her fake reality in Westview, it’s understood that their existence relied upon the neighbourhood remaining intact.

So when Wanda brings the town back to its reality, that appeared to mean that Billy (Julian Hilliard) and Tommy (Jett Klyne) would no longer be a part of her life.

However, having heard them begging her for help, it seems that isn’t the case, and so Wanda’s journey in Phase Four of the MCU could include a quest to save her children.

Wanda is next set to appear alongside Benedict Cumberbatch in Doctor Strange in the Multiverse of Madness.

The Hell Dimension that helped to create the Darkhold actually appeared in the first Doctor Strange film, when Stephen Strange went up against villain Dormammu in the Dark Dimension (which it is also known as).

It therefore wouldn’t be too far a stretch to assume that the introduction of the Darkhold will have major implications going forward in Phase Four of the MCU… particularly if Agatha is still around to cause mayhem.