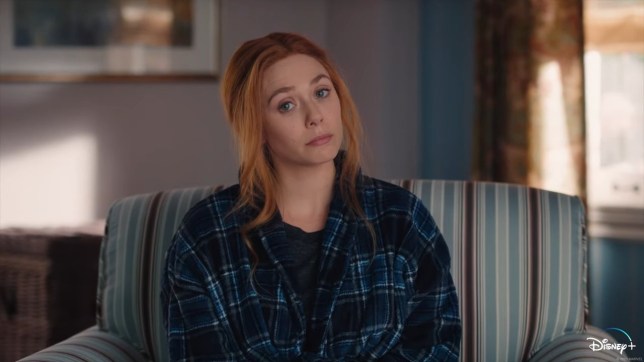 Elizabeth Olsen’s Wanda finds herself in a spot of trouble in episode 7 (Picture: Marvel Studios/Disney)

Warning: spoilers ahead for last week’s episode of WandaVision.

One of the biggest theories surrounding WandaVision is that Marvel villain Mephisto is set to make an appearance… a rumour that may have been hinted at in the most recent episode.

In episode seven of WandaVision on Disney Plus, Agnes (Kathryn Hahn), a neighbour and friend of Wanda Maximoff (Elizabeth Olsen) and Vision (Paul Bettany), is finally revealed to be Agatha Harkness, a powerful magical being with her own witchy theme tune to boot. (Yes, Agatha All Along has been playing on repeat in our heads for a week).

While her reveal was monumental – despite being predicted by fans from day one – the final two episodes of WandaVision will likely be full to the brim with even more surprises.

During a recent interview, Paul teased that there is a big cameo in the pipeline with an actor he’s wanted to work with his entire life… leading some people to assume that he was talking about Al Pacino, one of his childhood heroes.

Several fans suspect that the Scarface star may have been cast as demonic character Mephisto, having said in 2014 that he was speaking to Marvel boss Kevin Feige.

Near the end of episode seven when Agatha brings Wanda into her home, Scarlet Witch notices a large bug on one of the curtains.

#WandaVision if itâs not Mephisto at this point then this is the biggest misdirection in history…. the fly ðª° the devil reference, Agatha reveal, the darkhold and the demon faces on the walls of the satanic basement ð pic.twitter.com/Bf5TXr3fXI

As the Marvel comics dictate that Mephisto’s earliest appearance on Earth was in the form of fly, many people think this is a sign that he will soon be introduced on the programme.

It must be noted that in the neighbourhood of Westview, everything is made to seem perfect and there are no critters seen crawling around.

Which makes it even more suspicious that a large bug – more specifically a cicada, as many fans have clarified – would randomly appear in Agatha’s home.

Despite the evidence pointing towards Mephisto, not everyone is convinced.

‘The funniest thing I’ve seen from WandaVision this week in the fandom was when someone thought the fly was Mephisto. I was in tears when I saw that,’ one person tweeted.

To be honest, it wouldn’t be the strangest conclusion to draw, all things considering.

WandaVision is available to watch on Disney Plus with new episodes released on Fridays.