Spoiler alert: this blog is for those watching Vigil on BBC One. Don’t read on unless you have watched episode one.

Hands (and periscopes) up if you saw that coming? Star-studded submarine thriller Vigil began with a double bang, as first a fishing trawler was dramatically taken down – swiftly followed by one of the show’s marquee names, Line of Duty’s Martin Compston. Rest in peace, Able Seaman Steve Arnott, with your lockdown beard.

The latest creation from the makers of Line of Duty, World Productions, shares with its sister show a penchant for rug-pulling plot twists, acronyms and a willingness to kill off central characters shockingly early. Yes, this was HMS AC-12. A sub-aqua Agatha Christie. A mystery to put the Sailor into Tinker Tailor. Let’s dive in …

Something fishy this way comes

Off Barra Head in the Outer Hebrides, something fishy was occurring. The crew of trawler boat The Mhairi Finnea thought they had “a nice little shoal under us”. Suddenly, the nets snagged on something scarily strong. Stuck fast, the boat was violently towed along and – as the crew struggled to cut the wire – dragged underwater.

Deep below on Trident submarine HMS Vigil, gliding through the grey Atlantic murk like an armoured shark, chief petty officer Craig Burke (Compston) heard impact noises on sonar and alerted his superiors. Trawlermen were in the water less than a mile away. Burke wanted to go up and help, but Commander Neil Newsome (Paterson Joseph) ordered they keep Vigil hidden.

Burke drew parallels to the real-life 1990 case of the Antares, a trawler sunk in the Firth of Clyde after becoming entangled with a navy sub, resulting in the deaths of all four crew members. Newsome and right-hand man Lt Commander Mark Prentice (Adam James) were unmoved. They had Burke removed from his post and coldly continued their mission. Burke was incandescent. The trawlermen drowned. Roll Scandi-style title sequence. And breathe. 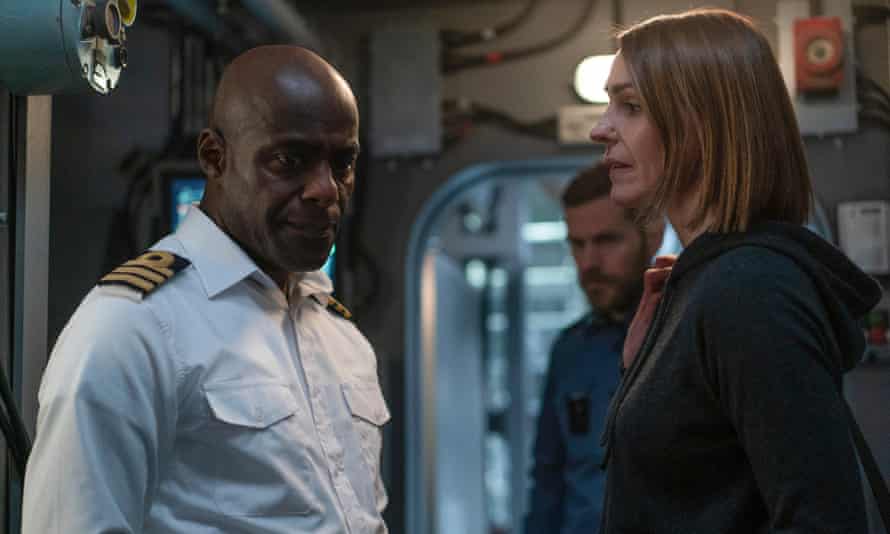 Burke was soon found in cardiac arrest in his bunk by Lt Simon Hadlow (Connor “Adam from Sex Education” Swindells), who immediately called for the medic. Knowing looks were exchanged between Prentice, Hadlow and Burke’s bunkmate, engineer Gary Walsh (Daniel “Podrick from GoT” Portman).

Despite crewmates administering CPR, Burke died. His body was carried through the cramped corridors to be kept cold in the missile store, AKA “the bomb shop”. Yes, Compston’s stint on this series lasted a mere eight minutes. But don’t worry, it won’t be the last we see of Line of Duty’s waistcoated warrior.

DCI Amy Silva (Suranne Jones) was out running on the streets of Glasgow when summoned by her boss to a meeting with navy top brass. Here, she learned that one of Vigil’s crew had died of an overdose after snorting heroin. Oh Steve Arnott, you’ve certainly escalated from prescription painkillers.

It was deemed the death happened in British territorial waters, so police would investigate – and Silva was their best detective. Slight snag: Vigil was on active patrol and the “Continuous at Sea Deterrent” had been unbroken for 50 years, so it wasn’t coming back to shore over a trifling fatality. Silva would be sent out to join the boat for three days, clear everyone of suspicion (ahem), then leave in a raft. “How are you in confined spaces?” smirked Shaw. Yeah, about that …

Steely Silva was ambitious, accomplished and, as is standard for a TV detective, troubled. She was on medication for depression and anxiety. Running rebalanced her mental health, but you can hardly go for a 10k aboard a submarine.

During dizzying panic attacks, we flashed back to a past trauma. She, her partner and their young daughter were involved in a car crash – and there was no sign of Silva’s family in the present day. Deaths in confined spaces, you say? “It’s only three days, I can do that,” said Silva, as if trying to convince herself.

She needed a sidekick on dry land and had “a shorthand” with DS Kirsten Longacre (Rose Leslie) – the result of a romance between the pair. Shorthand was needed because Silva couldn’t send messages home from Vigil, only receive them – in coded form, to sneak past prying naval eyes.

Longacre dropped her ex at Dunloch naval base, evading peace protesters playing dead in the road. “I’m sorry,” said Silva during their farewell hug. “You can’t say that now,” replied Longacre, twitching with emotion. The split seemed to be Silva’s fault. Now get on that helicopter as penance. 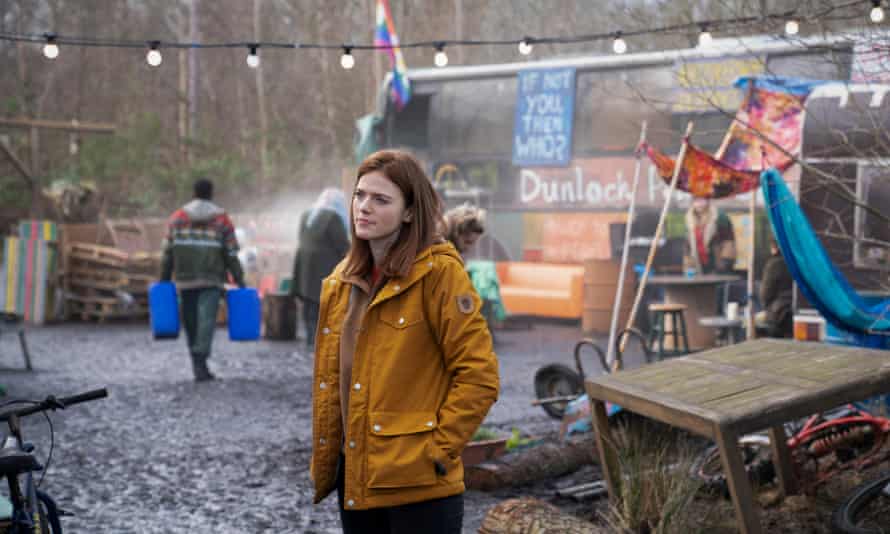 Just drop me off here, mate

It was a hair-raising flight out to sea alongside Burke’s replacement, the distinctly hostile CPO Matthew Doward (Lorne MacFadyen). However, he did let slip that their destination was “trouble”.

Silva was lowered in a harness and dropped through the sub’s hatch, which immediately clanged shut. Her request that Burke’s body be taken ashore for a postmortem wasn’t passed on. Closing ranks, the navy wasn’t what you’d call co-operative.

Her liaison was the boat’s likable coxon, CPO Elliot Glover (Shaun Evans). Glover gave Silva a crash course in submarine life. Headlines: there were 140 men and eight women on this seafaring sausage-fest and she’d soon be covered in bruises from bumping into stuff.

Silva told Newsome, Prentice and Glover what she’d found. Burke’s head injury and bruised jaw led her to theorise that an assault caused a delayed brain haemorrhage. This had been covered up by rubbing heroin around his nostrils.

The officers bridled. Their duty was to the mission, not a one-woman murder inquiry, and they couldn’t afford a scandal. Yet disquieting details kept emerging.

Burke had had a pub fight with two crewmates months previously. Walsh snarled that he was “a druggie and a shite sailor”. Burke had been seen on the missile deck, wearing a green fleece rather than his uniform, complaining of a headache. Silva found bloodstains in the area, making it the likely assault location. When she questioned Hadlow, he couldn’t escape quick enough. Silva smelled a conspiracy – and the shifty submariners still hadn’t told her about trawlergate.

Was Burke killed for blowing the whistle?

Back on land, Longacre learned that Burke had been secretly dating peace protester Jade Antoniak (Lauren Lyle). “Craig wasn’t an addict,” promised Jade. “The navy killed him to cover up the Mhairi Finnea going missing.” Longacre forwarded this intel to Silva, cloaked in a mention of Iain MacDonald’s folk ballad The Iolaire, about the 1919 sinking of a naval yacht near Stornoway.

When she searched Burke’s quarters, she found a USB stick in a hollow chair leg. Evading her navy minders, she uploaded the files to her laptop. They included a self-filmed video of Burke claiming corruption and murder aboard Vigil. And they were coming for him next. We know how that ended.

‘Peace is an illusion. We’ve always been at war’

From the Iolaire reference, Silva worked out that a trawler had sunk the day Burke died and he’d been dismissed from duties. When she confronted Newsome, the plot thickened.

The grim-faced captain admitted the trawler was pulled down by another, unidentified boat. As Newsome said: “If we’ve been successfully shadowed by an enemy boat, that is the single most frightening development in submarine warfare in my lifetime.”

At which point all hell broke loose. Flashing red lights. Emergency stations. Vigil’s reactor had crashed, resulting in system failure. This was not a drill. BBC One’s blockbuster drama just got serious.

Newsome’s repeated use of “XO” sadly wasn’t a nod to Gossip Girl but stands for “executive officer”. Messages sent to “CTF” went to the combined taskforce.

To keep viewers hooked like a fishing vessel’s nets on a mysterious submarine, the first two episodes of this six-parter are stripped across consecutive nights. Rejoin us at 10pm on Monday 30 August for the next naval debrief.

In the meantime, shipmates, I’d love to hear your thoughts and theories in the deep, dark void below …